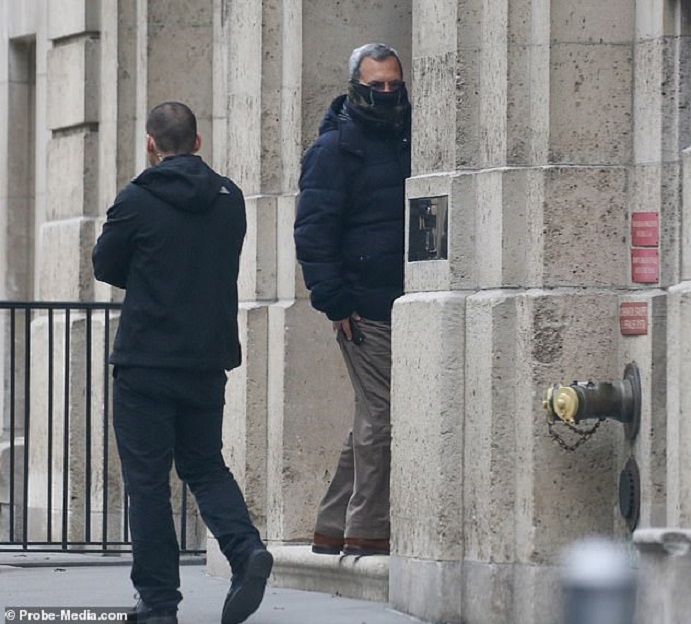 Residents of a building owned by Jeffrey Epstein’s brother say the former Israeli prime minister was a frequent guest when he was in New York.

The residents of 301 East 66th St. always knew Ehud Barak was there by the flashy cars parked outside and burly security guards in the lobby. The former Israeli prime minister’s visits were an open secret among the tenants of the Upper East Side building, which is owned by Jeffrey Epstein’s younger brother.

Several residents of 301 East 66th St. told The Daily Beast they had seen Barak in the building multiple times over the last few years, and nearly half a dozen more described running into his security detail. The building is majority-owned by Epstein’s younger brother, Mark, and has been tied to the financier’s alleged New York trafficking ring.

When asked about his stays at 301 E. 66th Street, Barak told The Daily Beast, “Despite the fact that there was no wrongdoing on my part, and that there is not even the faintest suspicion of wrongdoing on my part, I’m not going to address these questions because in the current political environment in Israel, the mere fact of my response to such a question is churned up as spin in the political game.”

“As a former prime minister I’m accompanied by bodyguards everywhere I go,” he added.

While the Israeli politician has tried to play down his ties to Jeffrey Epstein since the billionaire’s indictment on charges of child sex trafficking, Barak became a fixture of the Epstein story after Israeli outlets reported he had received more than $3 million in payments from Epstein-connected institutions since 2004.

Barak has repeatedly denied any knowledge of Epstein’s alleged crimes and maintains he never so much as talked to the financier in the presence of underage women. In a previous interview with The Daily Beast, Barak said he was first introduced to the financier by Israeli leader Shimon Peres in 2002, and saw Epstein only “on occasion” after that.

“I’ve never been there at a party,” he said. “To the contrary, at his home, I met many very respected people, scientists, Nobel Prize winners, and I met him also in Boston, at MIT or the Harvard labs he supports.”

As Business Insider reported earlier this week, residents of 301 East 66th St. described Barak as a frequent presence at their 16-story building. One resident told The Daily Beast that she saw and recognized the statesman in the lobby, while another said he was identified to her by a doorman or fellow resident.

Five other current and former residents said they had not seen Barak in person, but saw his security detail around the building on multiple occasions. One recalled riding in the elevator with bodyguards speaking Hebrew, while another said she regularly saw someone posted outside an 11th-floor apartment. Another woman recalled seeing the security detail in the lobby at least a dozen times.

“When he wasn’t in his apartment, [the security guards] would hang out in the lobby as if it was their own living room,” one disgruntled resident recalled. “They would sprawl out, they’d put all their shit on the couches, and sometimes they ate on the table there.”

The majority of the units in the building are owned by Ossa Properties, a real estate company started by Mark Epstein. The younger Epstein has admitted to renting out apartments to Jeffrey for personal use, but maintains that his brother has no ownership stake in the building. When a Daily Beast reporter called for further comment, Mark Epstein hung up.

In 2010, a former bookkeeper for Mc2—the modelling agency owned by Epstein associate Jean-Luc Brunel—told the FBI that the 66th St. apartments were being used to house underage girls from South America, Europe and the former Soviet Union. In a sworn statement obtained by the Miami Herald, the bookkeeper claimed Brunel was sending the girls to Epstein’s parties or loaning them out to wealthy clients to be molested.

Brad Edwards, an attorney for several of Epstein’s victims, raised many of the same allegations in a deposition later that year.

“Those females get work visas to say that they’re models, but actually they are prostituted out by Jeffrey Epstein and Jean-Luc Brunel, correct?” Edwards asked Adriana Ross, one of Epstein’s former assistants. “And various businessmen and politicians around New York and Washington D.C. go to these apartments frequently and have sex with underage minors, is that true?”

Ross, who has been accused of helping orchestrate Epstein’s “massages,” invoked her right against self-incrimination and declined to reply.

Epstein’s pilot, Larry Visoski, said in a 2009 deposition that he was paid via a company located at 301 East 66th St., from Epstein’s longtime accountant Darren Indyke. (Property records show Indyke lived in the building until at least 2000.) Visoski claimed Lesley Groff—an assistant of Epstein’s who is accused of helping him procure underage girls—also worked out of the building.

Sarah Kellen, another assistant who was accused of helping schedule Epstein’s “massages,” ran an interior design firm out of the building as recently as 2015. Nadia Marcinkova, who was accused of participating in sexual encounters with Epstein’s underage girls, registered an aviation business to the 66th St. building in 2011. Property records show Marcinkova’s apartment was also located on the 11th floor.

Last year, an Israeli investigative journalist revealed that Barak received about $2.4 million in 2004 from the Wexner Foundation, where Epstein was both a trustee and major donor. Epstein also reportedly invested $1 million in Barak’s technology start-up, Carbyne, in 2015—almost a decade after the billionaire pleaded guilty to soliciting an underage prostitute.

Barak has said he is looking into how to disentangle Epstein from Carbyne’s finances. He has refused to expand on the work he did for the Wexner Foundation, other than to say that he “did what I committed to do.”

“I perform research and geopolitical consulting for a lot of interested parties,” he previously told The Daily Beast. “It is up to them if they want to discuss it.”

Still, the controversy has followed the statesman throughout Israel’s elections, where Barak is running to replace current Prime Minister Benjamin Netanyahu. Earlier this month, Netanyahu—who is facing indictment in several corruption cases himself—called for an investigation into Barak’s relationship with Epstein. In a complaint to the Israeli attorney general, a lawyer for Netanyahu’s party suggested the Wexner Foundation could constitute illegal foreign donations.

“It pains me to hear that people I know are in trouble with the law,” he wrote. “First Netanyahu, now Epstein. My wish for them both is that the truth will out. Period.”

With additional reporting by Noga Tarnopolsky

Ben & Jerry’s settlement boycott sparks anger in yet another US...

Trauma is constant for Gaza’s children

Ben & Jerry’s: ‘We are proud Jews and support Israel but...

The limits of Palestinian nationalism in the fight against Apartheid

Here in Jerusalem, we Palestinians are still fighting for our homes

The absence of the Arabic language from the public sphere in...

More than 150 academics call on EU to stop funding Israeli...

[‘hacking for hire industry’] Pegasus: US lawmakers call out NSO without...