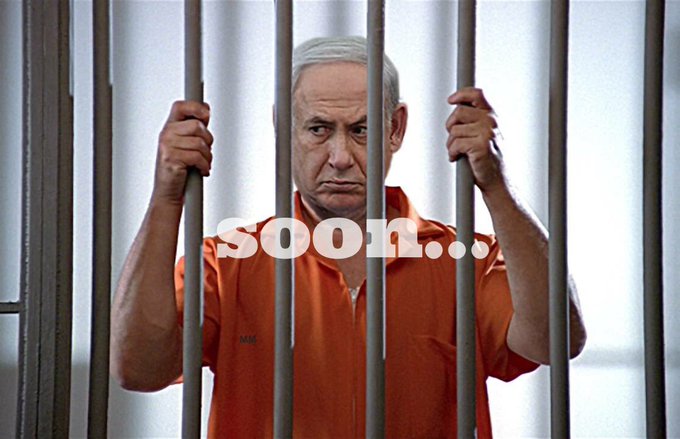 Israel has re-elected Benjamin Netanyahu, the leader of the right-wing camp, in a surprising result given the corruption charges against him and a forthcoming trial. Nevertheless, he duly went ahead and defeated his opponents.

Netanyahu’s victory provides us with an opportunity to consider whether corruption has permeated Israeli society as it shifts ever more to the right. Does electing a fellow right-winger matter more to voters than getting rid of (allegedly) corrupt politicians?

He won due to his personal charisma, security narrative, and incitement against the Arabs; no mention was made about his corruption. In any case, the latter was overlooked by Israeli voters. This suggests that the Israeli electorate, especially those in the right-wing, religious and nationalist camp, are more concerned about Zionist ideals and politics than a corrupt government.

Even so, a petition was presented to President Reuven Rivlin and the Knesset signed by 120 former Israeli officials asking him not to ask Netanyahu to form the next government. These are high-ranking figures who have won state awards, university presidents, academics and suchlike. More than 500 air force officers sent a similar petition to Rivlin with the same message about Netanyahu’s corruption.

Being asked to form a coalition government will not save him from going to trial because he did not obtain an absolute majority. In a few days, therefore, we may see something unique in Israel’s history: a strong Prime Minister who has just been re-elected, sitting in court as a defendant, fighting for his freedom and his political life.

Netanyahu has been indicted on very serious charges, including corruption, bribery, fraud, and breach of trust. His trial is expected to take some time to conclude. He is not the first senior politician in Israel to face criminal charges. His situation sheds light on the magnitude of the corruption in Israeli political life and its impact on the system now and in the future, with a significant number of politicians involved.

Perhaps the most prominent politician to have been imprisoned is ex-Prime Minister Ehud Olmert, who was convicted in a number of criminal cases involving bribes worth hundreds of thousands of dollars. Before him was Moshe Katsav, the eighth President of Israel, who committed sexual offences and two rapes. He was sentenced to seven years’ imprisonment.

Aryeh Deri, the leader of the Shas movement —a strong ally of Netanyahu — was imprisoned for taking bribes and using public money for the benefit of an association run by his wife. Far-right former Defence Minister Avigdor Lieberman, the head of Yisrael Beiteinu, is Netanyahu’s political enemy. He was connected, apparently, to many criminal offences, including the exploitation of public money for personal interests as well as attacking two boys and threatening them.

News reports about corruption in Israeli society are controversial because of the cost to the state, which is pushing citizens to describe the ruling class as a “corrupt leadership”. This leadership “pollutes” the political atmosphere and has a negative impact on public trust in state institutions.

What are the consequences of Netanyahu’s re-election, especially in terms of Israel’s status in the West? Will it be denied the economic and diplomatic privileges that it currently enjoys if the corruption levels increase? If the answers are “nothing” and “no”, then we all have a problem to contend with.

The indictments facing Netanyahu cover three areas: government privileges, bribery, and political appointments, all of which are widespread, apparently, from the prime minister to his ministers; from members of the Knesset to senior officials. Former Knesset Speaker Avraham Burg once said: “The 2,000-year struggle for Jewish survival comes down to a state of settlements, run by an amoral clique of corrupt lawbreakers who are deaf both to their citizens and to their enemies.”

Reports from the World Bank indicate that Israel is a country based on a high level of corruption, exceeding the “acceptable” rate in developed countries at 8.8 per cent, compared with the general rate in the West of 4.91 per cent. Israel is thus at the top of the list of the most corrupt countries.

Perhaps the most important effect of this corruption and other scandals is what might be called the deterioration of values and the “disturbance and decline of the soul” in Israel. It is heading in the wrong direction and is being dragged into the darkness towards possible extinction, not because of its enemies, but because of the Israelis themselves, not least their leaders, or those who would claim leadership. There is a morality question mark over all of them, and the public does not trust them. Public confidence and trust in the Prime Minister fell from 34 per cent to just 21 per cent, while trust in the State President went down from 67 per cent to just 22 per cent. What’s more, 79 per cent of the Israeli public has expressed concern for the future of the state due to corruption, with 75 per cent convinced that the malaise is widespread.

There must be concerns about the future of the Israeli political system. Once senior figures are indicted for corruption, the stability of the whole system is at risk. This also affects global opinions about Israel.

Israeli diplomats around the world have told the Ministry of Foreign Affairs that the countries in which they serve are concerned about the extent of corruption in the state and that reports of corruption cases on a daily basis have caused great damage to its image globally. Corruption, they explain, dominates every meeting they hold with political delegations, journalists and opinion-makers, especially in Western Europe and the US.

The fact that Israeli society is still, by and large, a society of immigrants from many countries with their own cultures and traditions may have something to do with the lack of internal harmony and the different degrees of acceptability of certain behaviour and expectations. Whatever the cause is, corruption is more prevalent in the upper echelons of Israeli society among those with power and influence.

This level of corruption in Israel is one of the most worrying issues on a par with “the Palestinian resistance and domestic crime” because it affects the stereotypically positive image promoted about the “Jewish and democratic state”. The resultant lack of confidence in the government exposes the lack of sound decision-making and measures in a very unstable part of the world. That has to be a concern for us all.