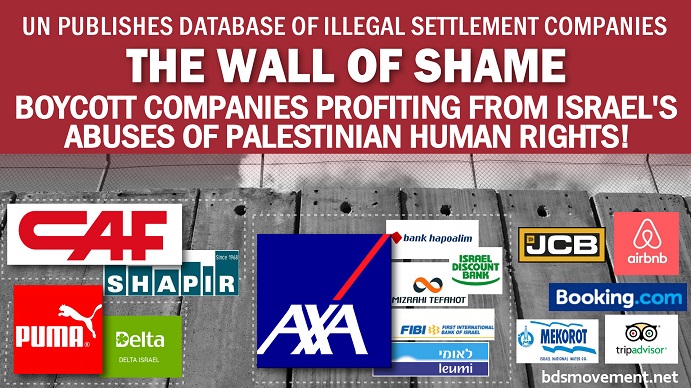 Airbnb, TripAdvisor and Motorola are among the international companies on the UN list of firms with links to Israeli settlements in the West Bank.

“We demand the companies immediately close their headquarters and branches inside illegal Israeli settlements because their presence contradicts international and UN resolutions,” said Mr Shtayyeh in a post on his Facebook page.

“We will pursue companies listed in the report legally through international legal institutions and in courts in their countries for taking part in human rights violations in Palestine.”

Mr Shtayyeh said Palestinians would also “demand compensation” for what he called “their use of our occupied land illegally.”

The report, released by the UN human rights office on Wednesday, lists 112 business entities that the office says it has reasonable grounds to conclude have links to the settlements. The list includes global travel companies, including Airbnb, Expedia Group, Opodo and TripAdvisor. Others include tech and communications giants Motorola and food provider General Mills.

The proposal for a UN database of companies with business ties to Israeli settlements in the West Bank was adopted in March 2016. Subsequent delays have led to mounting frustration among Palestinians, who have long campaigned for the removal of the settlements, which they say act as a barrier to an independent Palestine.

“The long-awaited release of the UN settlement business database should put all companies on notice: To do business with illegal settlements is to aid in the commission of war crimes,” Bruno Stagno, deputy executive director for advocacy at Human Rights Watch, said in a statement.

Palestinians welcomed the publication as a “victory for international law.” It comes after rising tensions over US President Donald Trump’s Middle East peace plan, which was announced last month, prompted protests in Palestine and several other countries.

The peace plan — drawn up without Palestinian input — would allow Israel to retain control over much of the territory it has annexed, including its settlements in the West Bank, which are regarded by much of the world as illegal.

Addressing the UN Security Council on Tuesday, Palestinian Authority President Mahmoud Abbas denounced Mr Trump’s plan and said it would result in a Palestinian state that resembles a “Swiss cheese.”

A total of 321 companies were reviewed by the UN human rights office. Of the 112 included in the final list, 94 are domiciled in Israel and 18 are based in six other countries, including the United States, Britain, Luxembourg, the Netherlands, Thailand and France.

Israeli Prime Minister Benjamin Netanyahu rejected the report as the work of a “biased and uninfluential body.

“Instead of dealing with human rights, this body is trying to blacken Israel’s name. We reject any such attempt in the strongest terms and with disgust,” he said in a statement.

“I am conscious this issue has been, and will continue to be, highly contentious,” Michelle Bachelet, the UN High Commissioner for Human Rights, said in a statement.

One of the businesses named in the report, home-rental company Airbnb, had already acknowledged having listings in settlements and said last April that it would donate proceeds from any bookings in the territory to international humanitarian aid organisations.

Another, cereals maker General Mills, said it was listed because of a manufacturing facility that “uses natural resources, in particular water and land, for business purposes”.

A spokesman for Ms Bachelet said the report was not a “blacklist” and was not intended to qualify any of the companies’ business activities as illegal.

But it is a sensitive issue as companies named could be targeted for boycotts or divestment intended to put pressure on Israel over its settlements. Despite the spokesman’s remarks, they could now also face legal battles.

South Africans in Israel: A home away from home for white colonialists

The cultural genocide in Palestine: On Sally Rooney’s decision to boycott...

Israel has ties with all Arab states, says minister

Disrupting the business as usual of unbridled US military support for...

The meaning of Apartheid for Israel

Farmers in Gaza struggle to access lands near Israel

German and Israeli fighter jets fly over Jerusalem as part of...

7amleh released a survey of the digital activity of Palestinian Civil...