Home nieuws UK PM’s threat to Palestine is also a threat to our free... 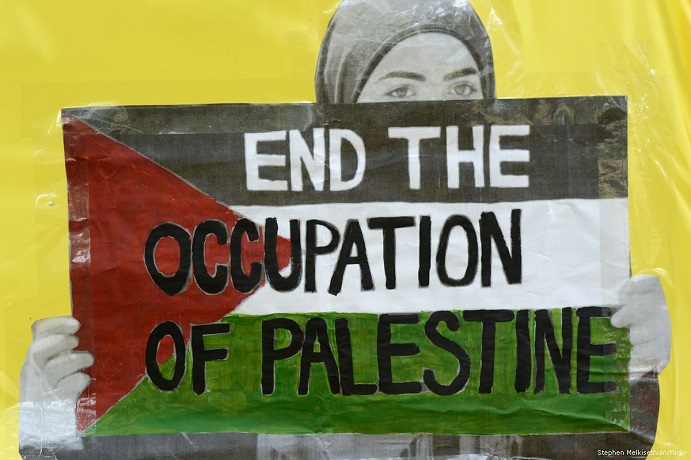 The entire western world is facing an almost unprecedented assault on freedom of speech – and Palestine is the issue at hand.

In the United States over the last few years, at the urging of the Israel lobby, 28 states have now passed laws targeting the BDS movement, for boycott, divestment and sanctions, according to US civil rights groups Palestine Legal.

Western European countries too have seen even more severe repression of solidarity with the Palestinian people – especially in France and Germany. There are attempts to outlaw it all together, or effectively outlaw opposition to the Israeli state’s official ideology, Zionism.

In recent years, for Israel and its supporters, the BDS movement has become the great evil bogeyman.

But BDS in reality is nothing more than a Palestinian-led movement demanding some of their most basic human rights.

BDS calls for the end of Israel’s military occupations, equal rights for everyone living between the River Jordan and the Mediterranean Sea, and the right of return for all Palestinian refugees expelled and barred from historic Palestine since 1948.

This unifying, three-pronged, rights-based approach has meant that the BDS movement, since its formal foundation in 2005, has been the single most successful solidarity strategy of the non-violent Palestinian resistance globally.

Modelled on the successful campaign to boycott South African apartheid, the BDS movement has caused Israeli and pro-Israeli racists the world over sleepless nights over the last 15 years.

The Israeli government now considers BDS such a long-term strategic threat to their racist military dictatorship against the Palestinians in the West Bank that they budget tens of millions of dollars to fight what they term a “war” against the movement.

An entire ministry of the government – the Ministry of Strategic Affairs – has, since 2015, been dedicated to fighting BDS and other forms of solidarity with Palestinians – what it smears as “delegitimisation” of Israel.

This “war” against BDS is fought both in the public political and diplomatic area, and on the more secretive and covert level of clandestine Israeli “black-ops” around the world.

The successes of the BDS movement are such that it has led to an immense Israeli backlash. And the increasingly globalised right and far-right in Western countries are on the side of the Israelis.

In this struggle for justice in Palestine, we are firmly into the “fighting” phase.

It is in this context that we find ourselves now on the cusp of a major new Tory government offensive against the right to campaign for Palestinian rights in the UK.

As he promised in his last election manifesto, Prime Minister Boris Johnson just confirmed last month, in the full background briefing notes for his government’s Queen’s Speech, that he intends to press ahead during this Parliament with a new law banning publicly funded bodies from using BDS against “foreign countries and those who trade with them”.

The briefing does not explicitly name Israel, but it’s clear from its wording that it’s meant to protect and promote Israel.

And in fact, the very broadness of how this prospective new law seems likely to be drawn up shows what a threat to free speech it is.

Boycotts are after all a form of speech.

I have the right as an individual, and we have the right as communities collectively, to decide not to purchase products and services which we believe have been unethically sourced – such as Israeli settlement produce grown on stolen, colonised Palestinian land in the West Bank – or to call on our public institutions to withdraw their investments in companies involved in Israeli war crimes and racism.

Boris Johnson’s forthcoming new law, on the other hand, seems likely to severely chill such free speech. This must be resisted.

In the US, they have a major advantage. That advantage is called the First Amendment to the Constitution, and it protect – at least in theory – the right to free speech.

Anti-BDS laws have been actively challenged, and bills have been stopped in their tracks by activists pressure in several states. On the federal level, the Israeli Anti-Boycotts bill failed in 2018 after pressure from an alliance of Palestine campaigners and civil liberties groups.

In essence, all these laws violate the principle of free speech, are unconstitutional and will ultimately fail when challenged in higher courts – as already happened in several cases.

The question for us in the UK is slightly different. We have a disadvantage in that we have no written constitution, and thus no first amendment protecting free speech.

So it will take an immense grassroots political struggle for us to overcome such laws. The exact detail of the Tory anti-BDS law remains to be seen.

That makes it all the more important to press ahead now, and to campaign for public bodies to defy any such laws.

We should take matters into our own hands. The Palestinians can’t wait for justice, and neither can we wait for our own right to speak freely.

That will make campaigns like student-led referenda in favour of BDS all the more important. Building popular support for BDS will become vital, because after all, we’ve been here before.

In the 1980s, the Tory government also attempted to ban councils from boycotting an apartheid country, in defence of a racist ally state overseas – South Africa.

Now, once again, the Tory government is protecting apartheid and white supremacy – this time in Israel.

Which side of history do we want to be on?