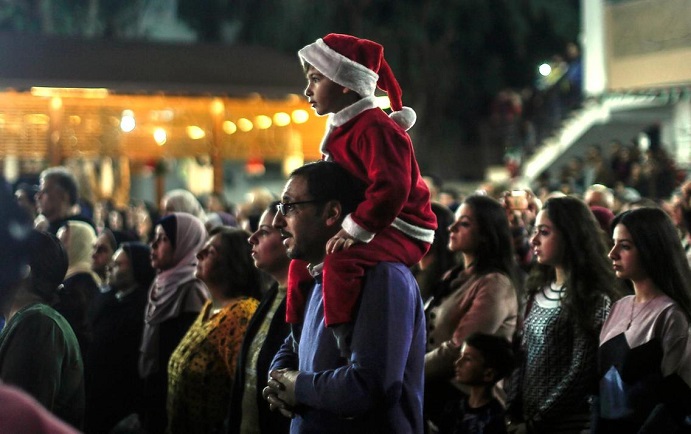 Gaza’s minuscule community of Christians will spend this Christmas feeling even more under siege than normal. The Israeli military authorities have denied the vast majority of the enclave’s 1,100 Christians a permit to exit the Palestinian territory for the holiday season.

Unlike previous years, none will be allowed to join relatives in Bethlehem, Jerusalem or Nazareth, or visit their holy places in the West Bank and Israeli cities. Alongside the enclave’s nearly two million Muslims, they will be forced to celebrate Christmas in what is dubbed by locals as “the world’s largest open-air prison”.

Israel has issued 100 permits for travel abroad, via Jordan, but even those are mostly useless because only one or two members of each family have been approved. No parent is likely to choose to enjoy Christmas away from their children.

As ever, Israeli authorities have justified their decision on security grounds. But no one really believes this tiny, vulnerable minority poses any kind of threat to their giant military and intelligence-gathering machine.

For decades Israel has pointed to the steady decline of the Palestinian Christian community as proof of a supposed clash of civilisations in which it is on the right side. The gradual exodus of Christians, it argues, is evidence of the oppression they suffer at the hands of the Palestinians’ Muslim majority. Claiming to represent Judeo-Christian values, it supposedly stands as their sole protector.

In fact, the fall in Palestinian Christian numbers relates chiefly to other factors.

That began with the country’s creation in 1948 and the events Palestinians call their Nakba, or Catastrophe. Christians, who lived historically in Palestine’s main cities, were among the first targets of the new Israeli army’s ethnic cleansing operations.

Since then, those in the West Bank, Jerusalem and Gaza have sought to escape from decades of occupation, while those belonging to a Palestinian minority living as citizens in Israel have tried to break free from the institutionalised discrimination they face in a self-declared Jewish state.

Christians have enjoyed greater success than Muslims in bolting the region because of their historic connections to international churches. The legacy of missionary activity – church-founded schools and hospitals in the region – have offered a gateway to the West and a new life.

The current treatment of Gaza’s Christians hints at the lie in Israel’s claim that it protects Christians. It has denied them permits for two reasons unrelated to security.

First, in violation of its commitments under the Oslo accords, it has been reinforcing the complete physical separation of the West Bank and Gaza.

The Christians of Gaza, with family ties to Palestinians in the West Bank and Israel, are a reminder that all belong to the same Palestinian people, forcibly dispersed by Israel 71 years ago and then imprisoned in different ghettos. Rather than view Gaza and the West Bank as two territories integral to an emerging Palestinian state, Israel has been carefully fashioning a narrative of division that dominates in the West.

Gaza is presented as an abhorrent, Islamic terrorist entity on Israel’s doorstep, which would exterminate its Jewish neighbours given half the chance. The occupied West Bank and East Jerusalem, meanwhile, have been depicted as the epicentre of the Jewish people’s national revival.

Prime minister Benjamin Netanyahu and the settler-right are gripped by a fear that their chauvinist, exclusivist approach might be subverted by a Christian counter-narrative. That is, in part, why the West Bank’s Christians and holy sites in East Jerusalem and Bethlehem are as besieged – by concrete walls – as Gaza’s own Christians. Far from respecting and nurturing Palestinian Christians, Israel has treated them as a grave threat to its self-serving, contorted narrative of a clash of civilisations.

Second, the blanket denial of permits is a reaction to previous years in which a proportion of Christians failed to return to Gaza at the end of the holiday break. They disappeared into the West Bank cities, given shelter by relatives. From there, some left for a new life in the US, Latin America or Europe.

In other words, Christians have taken advantage of the chance to escape Gaza for the West Bank, where Israel’s chokehold is a little looser and its military footprint a little less menacing and lethal.

The family members denied permits this year are being held ransom, an insurance policy ensuring that those few allowed out return.

The reasons why Gaza’s Christians would want to flee are manifold. Like their Muslims neighbours, most are desperate to find release from a blockade entering its 14th year.

We are only days away from the year 2020, which the United Nations warned several years ago would mark the moment when Gaza would become “uninhabitable” – were Israel not to change course.

That prediction was not wrong. Unemployment and poverty are rife; schools overcrowded to bursting point; hospitals lack medicines and equipment is failing; power supplies are intermittent; rivers of sewage bubble up into the streets after heavy winter rains; and drinking water is so polluted as to be dangerous to human health.

Infrastructure and many homes are in ruins or crumbling after waves of Israeli military attacks.

For Gaza’s unemployed young, Christian and Muslim alike, the future looks bleaker still. Families unable to raise a dowry or build a home have little hope of persuading another family to give their daughter’s hand away. Most of the next generation are unlikely ever to be in a position to support a family of their own.

Back in 2006, an adviser to former Israeli prime minister Ariel Sharon explained that the aim of the blockade – a policy then being formulated – was to engineer the population’s chronic starvation. “The Palestinians will get a lot thinner, but won’t die,” Dov Weissglass said.

Nearly 14 years later, Gaza’s population is increasingly emaciated – physically, financially, emotionally and spiritually. It is the outcome of a policy devised by army generals and politicians to immiserate Palestinians, to inject into their lives a gnawing fear and to force them to focus exclusively on daily survival.

The decision to trap Christians in Gaza this Christmas is only a prelude to a larger, seemingly contradictory longer-term plan.

The choking blockade is designed to sap the people of the will to stay and struggle for what is theirs. Rumours in the media and elsewhere have suggested for some time that both Israel and the US ultimately want to push the Palestinians into the neighbouring Sinai peninsula, if Egypt can be arm-twisted into agreeing.

By keeping all of Gaza’s population under siege this Christmas, Israel hopes that a few Christmases hence it will receive the gift it craves most: the permanent exodus of most of the enclave’s Palestinians, to make them someone else’s problem.

Jonathan Cook is a freelance journalist in Nazareth