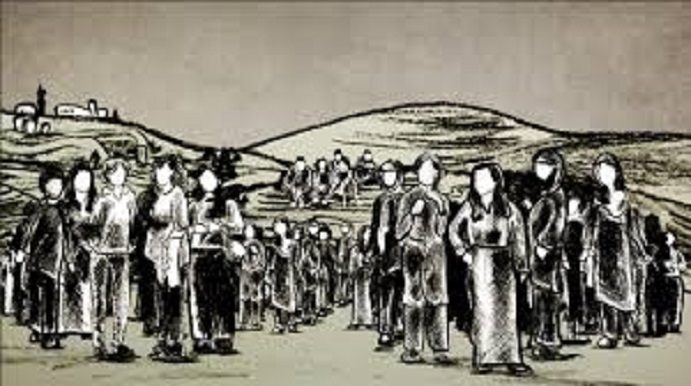 Naila and the uprising video here

During the first Palestinian Intifada – or uprising in the occupied territories – courageous female activists took a full part in the movement, building self-sufficiency for Palestinians under Israeli occupation and collectively blazing a trail of resistance.

This film tells the story of Naila Ayesh, a student organiser in Gaza at a time when nearly every political activity was punishable by the Israelis.

“Men were the main targets, and we felt women would face less scrutiny. So women took on more significant roles. When I got out of college, I saw more and more women joining the resistance against the occupation,” Ayesh says.

“I was drawn to young people from the Democratic Front and I’d participate in their activities. I knew that joining the struggle was a big risk.”

Ayesh spent years building the infrastructure for economic independence for women. She was pregnant when she was first arrested in 1986 and sent to Maskubiya prison in Jerusalem.

“I was interrogated for two weeks. I was tied to the chair in a very uncomfortable way for days. I had already told them that I was newly pregnant. They told me it didn’t make a difference to them – woman, man, pregnant or not, to them, they said, I was a saboteur. I started bleeding,” Ayesh says.

In October 1988, Ayesh was transferred to Telmond prison for female political prisoners, leaving behind her young baby who was still breastfeeding. Ayesh was held without charges for several months.

Soon after she was sent to Telmond, however, the Israeli authorities allowed her baby son to join her there.

“My son was the only child in prison. I saw so much pain in the eyes of the other female prisoners. They all had children,” Ayesh says.

She adds: “Our relationship inside the prison was really strong, like sisters. If we didn’t build those ties, we’d lose our humanity. Our strength was our unity.”

Ayesh and dozens of other women continued their activism and started building parallel institutions to challenge the Israeli military’s control of Palestinian life.

They spearheaded underground classrooms to replace schools shut down by the army, citizen-run health clinics to treat those with no access to hospitals; and “victory gardens” to break the reliance on Israeli agriculture.

“Everyone took part in the struggle, without exception. Even though it was dangerous, since Israeli soldiers were everywhere. We felt we were doing something important. We were convinced this uprising would succeed.”

For more than 10 years, whenever I have asked Palestinian grassroots leaders about the models of inspiration that they draw on, they have consistently pointed to the first Intifada.

I knew after years of filmmaking in the region that, despite the first Intifada’s immense status among Palestinians, it remained misunderstood internationally, shaped by a dominant narrative steeped in a law-and-order frame that overlooked the daily grassroots organising at the core of the uprising.

When the Just Vision team decided to conduct our own in-depth research, we came to grasp just how much of the story had been obscured.

The first Intifada was not only a vibrant, strategic and sustained nonviolent civil resistance movement; for months, it was also led by a network of Palestinian women who were fighting a dual struggle for national liberation and gender equality.

We knew we wanted to bring this story to light by producing a documentary that could provide insight and wisdom from the veteran female activists of the first Intifada to today’s rising leaders.

We felt it was crucial to provide a more holistic account of that time, illuminating how Palestinians have historically engaged in unarmed resistance efforts, underscoring the power of civil society in creating change and elevating the role of women in movement building.

The lessons of Naila and the Uprising are as relevant today as they were in 1987. Women across the globe continue their struggle for basic freedoms and dignity. From the first Intifada to the present moment, it is clear: women’s leadership in civil society organising is vital.

But too often, their work is sidelined or ignored. That is a troubling trend, particularly as a number of academic studies have demonstrated that movements that support women’s leadership are more likely to employ nonviolent tactics. And those that employ unarmed civil resistance are much more likely to achieve their goals.

Our own research made it clear that women have consistently been a part of influential social movements coming out of the Middle East, but time and again, the cameras focus on armed men. This perspective not only erases women but also misrepresents the struggles themselves, as well as the demands behind those struggles.

Naila and the Uprising draws attention to those movements, in real time and historically, so that the courage and creativity of women can be amplified and leveraged. The film is also a cautionary tale for what happens when women are stripped of their leadership roles and excluded from ongoing struggles.

When we first embarked on creating Naila and the Uprising, we knew that surfacing this history was important. But we did not fully anticipate exactly how timely the film would be.

The women in Naila and the Uprising are not only role models for the rising generation of Palestinians and Israelis struggling for justice, freedom, dignity and equality. They also illuminate lessons and legacies for communities around the globe who are demanding more of their political leaders as they organise for the rights and wellbeing of all.

We were privileged to connect with dozens of women while making this film. They demonstrated incredible courage and resilience – in their ongoing resistance and as they step forward to tell their stories.

It is our hope that their experiences will inspire and inform audiences worldwide just as they have moved and educated us.