Home nieuws Ready for execution: the former Israeli General and his quest for a... 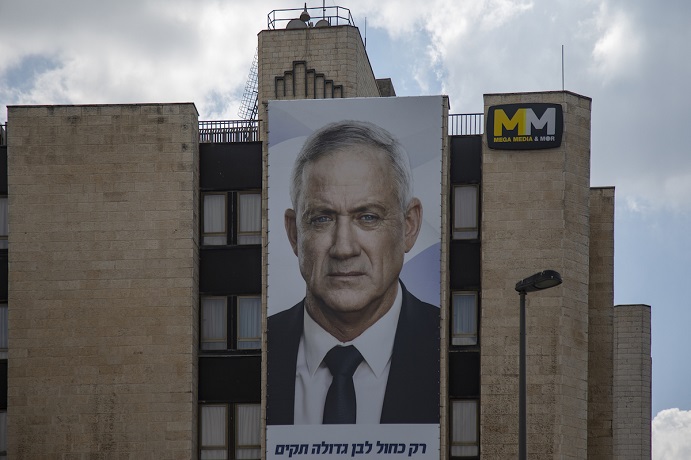 Benny Gantz, the leader of Israel’s newly-founded Kahol Lavan – the Blue and White Party – is the rising star of Israeli politics. The fact that he has the opportunity to finally oust long-serving Prime Minister, Benjamin Netanyahu, speaks volumes about the appeal of his political message, his charisma, and his growing credibility among many social sectors in Israel.

Gantz’s rival, Netanyahu, is a polarizing character in Israel, as well as in the United States.

‘Bibi’s’ special relationship with the American President, Donald Trump, made him either loved or hated by most Americans. According to a February 2017  Gallup poll, 65% of all Republicans view Netanyahu favourably, while only 18% of Democrats share that view.

But Netanyahu is not just the archetypical, devious and self-serving politician, he is able to inflict immense damage as well. He has launched major wars on Gaza and used military force, and blockades on civilian populations to serve his own limited political agenda and to simply garner votes. While avowedly racist, Netanyahu’s racism often flares during election seasons to galvanize his ardent far-right supporters.

“The Arabs want to annihilate us all — women, children and men”, read a message from Netanyahu’s Facebook page that was sent to Israeli voters during his election campaign in September. In his message, Netanyahu used a word for genocide usually reserved for the Holocaust,” reported the Los Angeles Times.

However, enthusiasm to see the end of the sinister Netanyahu legacy may blind some from understanding that a Gantz-led government does not necessarily signal a shift in Israeli politics, neither in Gaza nor anywhere else.

As a former chief of general staff of the Israeli army, Gantz orchestrated the destructive war on the besieged Gaza Strip in 2014. Despite the heavy death toll, he showed no remorse. Instead, in a campaign video clip in January 2019, he boasted about sending “parts of Gaza back to the Stone Age”.

Indeed, Gantz oversaw the systematic annihilation of the besieged Gaza region, which resulted in the deaths of over 2,200 Palestinians and the destruction of 18,000 housing units.

Despite his violent pledge, Gantz failed to achieve the needed votes to form a government in the April 2019 elections. That was followed by Netanyahu’s failure to unify the ranks of his right-wing coalition which ultimately led to holding yet another general election in September.

To bolster his image as a strong Israeli leader, worthy of the people’s trust, Gantz promised in August that the next round of war against Gaza will be the “final round”.

“The next time something happens here, we will make sure that it’s the final round,” he said.

The Israeli daily, Haaretz, reported that “Gantz further said that if another conflict erupts while he is prime minister, the military would move to kill all of Hamas’ leadership”.

Judging by his constant references to the subject, Gantz appears genuinely obsessed with killing and destroying, with Gaza featuring constantly and prominently in his violent language.

Now that Gantz is in the throes of government formation, he is desperate to win the support of as many Israeli members of the Knesset (Israel’s parliament) as possible.  Expectedly, Gantz unleashed his political venom on Gaza, yet again.

“A government led by me will not bear a threat against the residents in the south and will not accept undermining Israel’s sovereignty,” he wrote on Twitter on November 2. “We will return deterrence with any cost, even if we are obliged to kill those who lead the escalations.”

It could be argued that Gantz’s violent attitude towards Palestinians is simply equal to that of Netanyahu and other Israeli leaders. However, one important difference makes Gantz even more dangerous. If the former general becomes Israel’s prime minister, he would take office with so much to prove, a reputation to garner and uphold, and numerous violent promises to fulfil.

In fact, Gantz is likely to arrive on the political scene with a vengeance; after all, he has already accused Netanyahu of being too “weak” on Gaza.

“People who are weak in front of Hamas in Gaza might bring a wave of horror to the West Bank,” Gantz said in August, referring to Netanyahu’s right-wing government.

Imagine, Netanyahu who was responsible for the highest death toll in any war launched against Gaza since 1967 is considered, per Gantz’s reasoning, “weak”. One can only guess what such an ominous statement means in practice.

The truth is, regardless of who rules Israel next, war on Gaza seems imminent. A Gantz-led government is likely to try to appease Israel’s war-hungry constituency; a Netanyahu-led government would naturally want to assert itself and prove that, unlike recurring accusations, it is not “weak”; and, finally, a joint-government coalition is likely to present to Palestinians and the entire region a two-headed monster, combining all of Israel’s violent forces into a perfect war storm.

The difference between Gantz and Netanyahu is hardly distinguishable; neither has a plan to achieve a just peace, or even the faintest desire to find one. It must certainly be satisfying for many to see war-criminal Netanyahu exiting the political office, or better yet, behind bars for his many corruption scandals. The sad truth is, however, that Gantz is unlikely to fare better as a prime minister than Netanyahu. Based on his war-mongering discourse, the Israeli general’s plans for war on Gaza are most likely already formulated and ready for execution.

Ramzy Baroud is a journalist, author and editor of Palestine Chronicle. He has authored a number of books on the Palestinian struggle including The Last Earth: A Palestinian Story (Pluto Press, London)