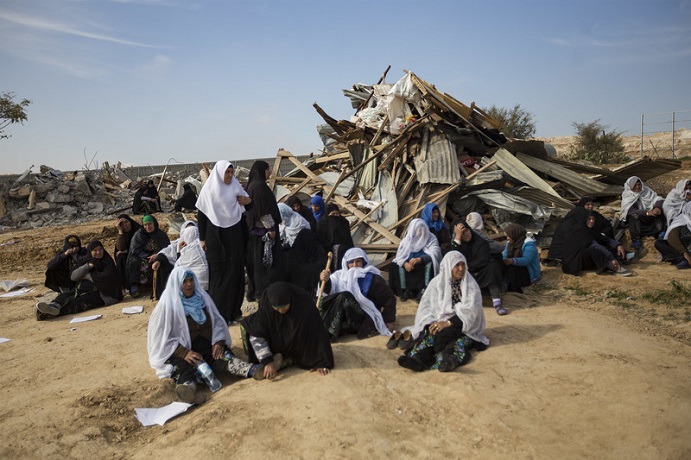 Israel plans to forcibly displace 36,000 Palestinian Bedouins in the Naqab (Negev) region of southern Israel to make way for a military training area and weapons testing facility, according to Adalah, a legal advocacy group for Palestinians in Israel.

That’s one quarter of all Palestinian Bedouins living in the Naqab, all citizens of Israel.

The plan, which was announced late last month, “overtly discriminates against the Bedouin population, and considers them an obstacle that must be removed from the landscape in order to clear a path for Jewish settlement and ‘development,’” Adalah stated.

Israel’s Authority for the Development and Settlement of the Bedouins intends to transfer Bedouins to “poverty-stricken, government-planned townships,” violating both Israeli and international laws.

If implemented, Israel will sieze about 65,000 acres of land – an area about one and a half times the size of Washington, DC.

One of the plan’s projects is to establish the Ramat Beka military industrial zone.

Israel will move a weapons testing facility owned by leading Israeli arms maker Elbit from the city of Ramat HaSharon in central Israel to the Naqab.

The testing facility, which would be twice the size of Tel Aviv, poses “health, safety and environmental risks” to those living around it, and would require the forcible displacement of thousands of Bedouins and more than 1,200 of their structures.

Elbit has supplied white phosphorus munitions and drones that have been used during Israel’s attacks on Gaza. It also manufactures cluster weapons for the Israeli army, helping it circumvent an international ban.

As part of the same plan, Israel intends to establish the Sde Barir phosphate mine, which requires the forcible transfer of thousands of Palestinian Bedouins as well.

The mine would cause serious health hazards to thousands more who remain.

Israel’s National Planning and Building Board and the Israeli government approved the plan on the basis of an environmental survey that Adalah says “ignores the existence of approximately 15,000 Bedouin citizens living in and around the area designated for construction of the mine.”

Adalah, along with 168 Bedouin residents of the most affected village, al-Furaa, and a number of human rights organizations, filed a petition with Israel’s high court demanding it stop the construction of the phosphate project.

A hearing is due on Wednesday.

“In order to Judaize the Naqab (Negev), Israeli authorities are implementing economic and military plans that are not intended to serve the Bedouin and, in fact, ignore their very existence,” Adalah attorney Myssana Morany stated.

Israel has long sought to get rid of the Palestinian Bedouin population in the Naqab.

It has forced residents of the Palestinian Bedouin village of Umm al-Hiran to agree to be expelled from their homes and resettled to the town of Hura in the southern Naqab region under threats of violence.

Meanwhile, Adalah is demanding Israel provide accessible voting stations to 11 unrecognized Bedouin villages whose residents would otherwise need to travel up to 50 kilometers to vote in April’s elections.

Meanwhile in the north of Israel, hundreds of Palestinian citizens protested earlier this week against Israel’s plan to build an Arab-only city on private land east of Acre.

The new city, called Tantur, would be built on land Israel seized in the 1970s.

Israel designated approximately 750 acres of confiscated land – or just over one square mile – for the project, which is set to include about 15,000 housing units and house more than 70,000 Palestinian citizens of Israel, according to the publication Arab48.

About 170 acres Israel intends to use are privately owned.

Several government ministries have adopted the project, including the interior and housing ministries.

Palestinians protested in the city of Jadeidi-Makr, which lies east of Acre and close to the site of the planned city:

Many held protests in Acre as well:

Israeli forces attacked protesters, arresting some of them:

Yousef Jabareen, a Palestinian member of Israel’s parliament for the Joint List, said that the construction of the new city is part of Israel’s plan to push Palestinians out of Jewish-majority cities and put them in ghettoes.

One purpose for the city is “to prevent the migration of Arabs to existing Jewish cities in the Galilee, including Upper Nazareth, Karmiel and Tiberias.”

Jabareen added that Upper Nazareth mayor, Ronen Plot, is an advocate of this project, as he desperately seeks to limit the migration to the city of Palestinian citizens of Israel unable to find housing elsewhere.

Upper Nazareth was founded in the 1950s as part of Israel’s effort to Judaize the Galilee. As recently as 2012, its then-mayor Shimon Gapso, called for the expulsion of the Palestinian residents of the neighboring city of Nazareth to Gaza.

Gapso proudly admitted to being a “racist” and, like his successor, vowed to do whatever was necessary to keep Upper Nazareth Jewish.

The Israeli government has long sought to increase the number of Jewish residents in the Galilee, where Palestinians remained a sizeable population after the Nakba, the ethnic cleansing of Palestinians in 1948.

This has been achieved by building Jewish colonies on land belonging to Palestinian communities, preventing the natural growth and the establishment of new Palestinian towns and villages.

Last year, a town in the Galilee region suspended building tenders for a 2,200-household residential development after its mayor learned that around half of the buyers were Palestinian citizens of Israel.

Although the vast majority of its original population was forced out during the Nakba, Palestinians still make up a third of the residents of the coastal city of Acre.

But Jabareen says the construction of Tantur would “serve the process of emptying” Acre of its Palestinian population “in a deliberate and systematic manner.”

Acre, a historic port and world heritage city, has long been the target of Israeli efforts to force out its remaining Palestinian population.

Israel’s tourism ministry, along with settlement groups, intend to convert Acre to a commercial center for Israeli Jews and tourists.

Forced to demolish own home

Meanwhile, a Palestinian citizen was forced by Israeli authorities to demolish his own two-story commercial building on Saturday in Deir al-Asad in the Galilee.

This video shows the demolition:

Abdullah Jabarin, a Palestinian from the city of Umm al-Fahm in northern Israel, was also forced to demolishhis own warehouse earlier this month after a similar order.