The report, “Playing the Security Card”, details what it describes as “a policy of segregation” designed to “allow a handful of Jewish residents to live as though they had not settled in the middle of a bustling Palestinian city, in the heart of an occupied territory”.

“This policy completely ignores the needs of hundreds of thousands of Palestinians and sentences them to an unbearable reality, with the hope that they will leave their homes ostensibly of their own free will,” B’Tselem stated.

Since the late 1990s, Hebron was been divided in two. In so-called Area H1, the Palestinian Authority (PA) exercises the same autonomy as it does in other West Bank cities.

In Area H2, some 700 Israeli settlers live in an area home to around 7,000 Palestinians. In recent years, according to B’Tselem, “both official and unofficial plans have been advanced to expand the settlement and develop tourism in the historic centre of Hebron”. 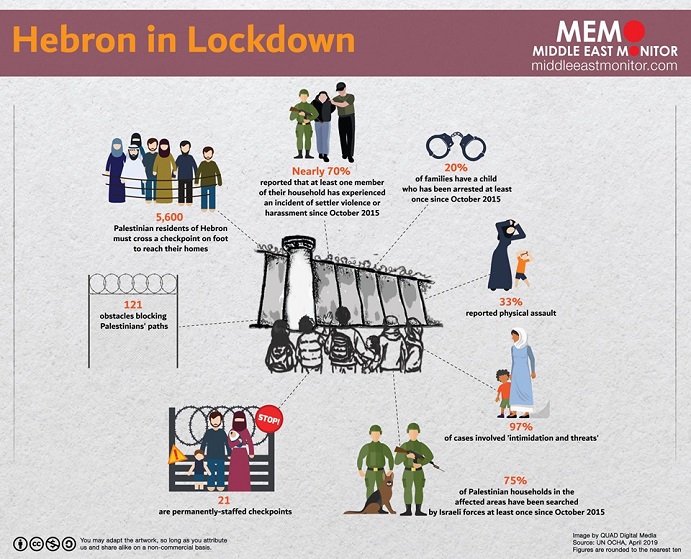 The human rights group has warned that “if these plans come to fruition, the settler population in Hebron stands to double over the next few years.”

B’Tselem describes a reality in Hebron whereby Israel maintains “a cruel system of travel restrictions which creates a contiguous strip of land isolated from the rest of the city that is partially or fully off limits to Palestinians, whether traveling on foot or by car.”

these living conditions have produced the outcome Israel desired: Thousands of Palestinians have left the city centre, and it has become a ghost town where only Palestinians who do not have the option to leave remain.

“The forcible transfer of thousands of Palestinian residents and the closure of hundreds of businesses in this manner violate the prohibition on forcible transfer enshrined in international law, which constitutes a war crime,” the human rights group affirmed.

B’Tselem added that while “the settlement in Hebron is exceptional in that it was injected into the heart of a major Palestinian city”, Israel’s policy there “is essentially identical to that employed in the rest of the West Bank: treating the area as primarily intended to serve Israeli needs and regularly ignoring the interests of Palestinians while giving settlers preferential treatment.”

“This regime instated by Israel is reminiscent of the systemic aspects of South Africa’s Apartheid regime,” B’Tselem said, “which included restricting access to land, limiting movement and denying political rights.”