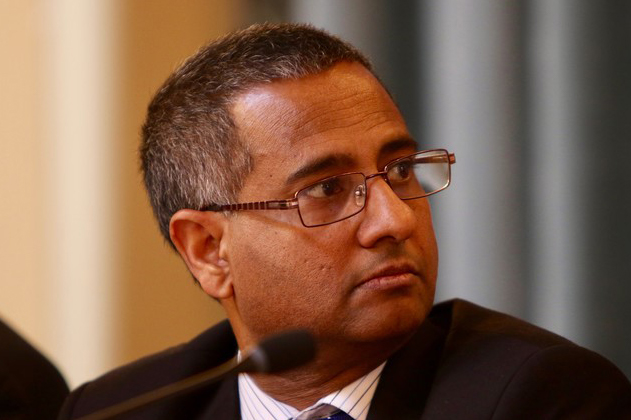 A new report by a United Nations expert gives Israel and its lobby carte blanche to smear the movement for Palestinian rights as anti-Semitic.

Ahmed Shaheed, the UN special rapporteur on freedom of religion or belief, issued the report ostensibly focused on anti-Semitism in late September.

It adopts a controversial definition of anti-Semitism which is being promoted by Israel and its lobby groups.

Human rights defenders have long warned that the so-called IHRA definition conflates criticism of Israel and its state ideology Zionism, on the one hand, with anti-Jewish bigotry, on the other.

Shaheed’s report acknowledges that critics of the definition are concerned that “it can be applied in ways that could effectively restrict legitimate political expression,” including criticism of Israel’s violations of Palestinian rights.

He therefore advises that the definition be used “as a non-legal educational tool” to minimize such “chilling effects.”

Shaheed also warns government bodies that use the definition in a “regulatory context” to exercise “due diligence” to ensure that freedom of expression is protected.

He pushes back gently against efforts to outlaw BDS – the boycott, divestment and sanctions movement for Palestinian rights.

Without necessarily endorsing them, Shaheed gives space to Israel lobby claims that the goals of the BDS movement – freedom, equality and justice for Palestinians – are “fundamentally anti-Semitic.”

He ultimately concedes that “international law recognizes boycotts as constituting legitimate forms of political expression, and that nonviolent expressions of support for boycotts are, as a general matter, legitimate speech that should be protected.”

Violating his own warnings

But in his report, Shaheed ignores his own warnings, giving broad credence to Israel’s efforts to redefine advocacy for Palestinian equality as anti-Semitism.

For example, while discussing the BDS movement, he asserts that expression which “rejects the right of Israel to exist, or advocates discrimination against Jewish individuals because of their religion should be condemned.”

The BDS movement already explicitly condemns discrimination against Jews for being Jews, as it rejects all forms of racism.

But Shaheed lumping anti-Jewish bigotry together with the questioning of Israel’s political claim that it has a “right to exist” is part of his report’s broader agenda to muddy the waters.

This is clear where he attacks what he brands as “left-wing anti-Semitism.”

Shaheed claims that in some cases so-called left-wing anti-Semites have “conflated Zionism, the self-determination movement of the Jewish people, with racism; claimed Israel does not have a right to exist; and accused those expressing concern over anti-Semitism as acting in bad faith.”

Shaheed makes these assertions as if they are uncontroversial statements, but each contains a highly contested political claim frequently made by Israel and its lobby.

Firstly, as Columbia University scholar Joseph Massad has explained, the claim that Zionism is the self-determination movement of the Jewish people is a recent invention dating back to the 1960s and 1970s.

Massad notes that historically, Zionism always defined itself as a settler-colonial movement. It rebranded itself as a movement for “national liberation” and self-determination only in the post-colonial era.

Secondly, the notion that Israel as a state has an abstract “right to exist” flies in the face of basic precepts of democracy and international law. Israel has no more “right to exist” than, say, East Germany or the United Kingdom.

East Germany ceased to exist in 1990, with German reunification. No one argues that East Germany has some abstract right to resurrect itself whether the people of Germany want that or not.

Similarly, the United Kingdom has existed for centuries, but not even the leaders of the British state argue that it has an abstract right to continue to exist forever against the wishes of its constituent peoples.

That is why Scotland was able to hold a referendum on independence in 2014 and is likely to hold another one in the future.

It is also why the British state recognizes that the people of Northern Ireland, currently part of the UK, have a right to vote in a referendum to join a united Ireland.

This is because self-determination belongs to the legitimate residents of a territory: States do not have a “right to exist.”

Rather, a people legitimately living in a territory has a right to constitute the entity that rules it.

Colonial settlers who invade and occupy that territory, driving out or subjugating its legitimate residents, cannot legitimize their own presence simply by rebranding their invasion as “self-determination” for the settlers, as Israel is attempting to do.

A more specific Israeli claim is that Israel has a “right to exist as a Jewish state” – in effect that it has a right to maintain a Jewish demographic majority.

That majority was violently engineered by inherently illegitimate means: the ethnic cleansing of 800,000 Palestinians by Zionist militias in 1948.

As I explain in my 2014 book The Battle for Justice in Palestine, Israel’s claim that it has a “right” to maintain a Jewish majority is an assertion that it has a perpetual right to enact inherently racist policies against the indigenous Palestinian people in order to control their numbers.

It is also self-evident that a basic Zionist policy, denying the right of return of Palestinian refugees, is indeed racist: Israel does not allow Palestinians and their descendants expelled from their homeland by Zionists to come home solely because they are not Jewish.

In fact fabricated allegations of anti-Semitism have been at the heart of Israel’s effort to shut down the Palestine solidarity movement on US campuses.

Such false accusations are also used to smear the UK Labour Party, led by Jeremy Corbyn, as institutionally anti-Semitic.

It is understandable that Israel’s propagandists would not want their lies and smears exposed.

But it would appear that Shaheed also believes that those falsely accused of anti-Semitism should be automatically deemed guilty and never given a chance to defend themselves.

He therefore grants Israel and its lobby a free hand to defame and libel anyone they like.

With sloppy, bad faith and dishonest claims, Shaheed’s report tries to put basic questions of free speech and Palestinian rights out of bounds by claiming that even discussing them is anti-Semitic.

The reason for that is clear: Zionist claims do not stand up to well-reasoned and fact-based scrutiny. Israel’s best strategy is therefore to shut down all discussion.

In August, Shaheed came under strong criticism from human rights defenders for his close relationship to Israel lobby groups and for ignoring Israel’s violations of Palestinian rights and religious freedom.

Following the publication of his report, it is clear those criticisms were well justified.