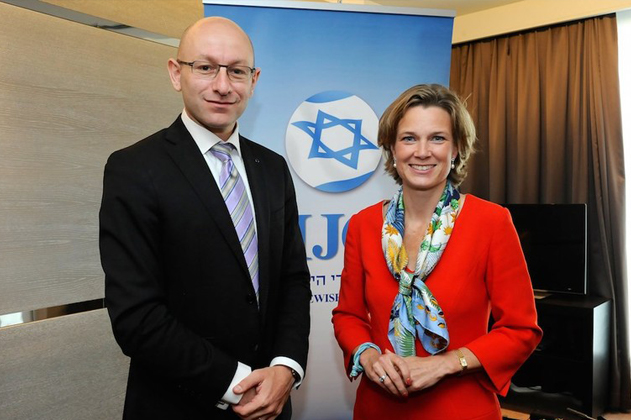 For nearly four years, Katharina von Schnurbein has been posing as a champion of Europe’s Jews.

If taken at face value, her speeches at numerous conferences suggest she is a conscientious civil servant motivated by a desire to halt persecution. A more detailed examination reveals she has been following an agenda set by Israel and its supporters.

The real objective of this agenda has been to muzzle the Palestine solidarity movement.

Von Schnurbein was appointed the European Union’s first coordinator against anti-Semitism in December 2015.

The idea for such a post did not originate within the Brussels bureaucracy.

During May 2015, the Israeli government hosted a “global forum for combating anti-Semitism” in Jerusalem.

An “action plan” for Europe was drawn up at that event by pro-Israel lobbyists from Britain, France and the Netherlands.

One of its recommendations was that the EU appoint a coordinator against anti-Semitism. Another was that the Union “consider” involving police forces in work ostensibly aimed at making Jews safer.

A similar proposal was made that same month at a Brussels conference organized by the American Jewish Committee, a leading pro-Israel group.

The “call to action” issued at that event distorted reality. It claimed that “Jews across the continent [Europe] experienced a surge in anti-Semitic violence and threats last summer, at the time of the Hamas-instigated conflict with Israel.”

The reality is that the attack on Gaza was instigated by Israel.

Its government used the firing of rockets by some resistance fighters as a pretext to inflict far worse violence on Gaza’s inhabitants, who were already living under siege.

Undoubtedly, some anti-Semitic incidents – such as the smashing of windows in a Belfast synagogue – occurred that summer.

Yet Israel and its supporters also sought to misrepresent the large-scale demonstrations of solidarity with Gaza throughout the world as being driven by anti-Semitism.

The recommendation made by the American Jewish Committee that EU governments “enlist law enforcement authorities” in fighting anti-Semitism should be seen against that backdrop.

Working in tandem with von Schnurbein, she has subsequently taken initiatives sought by the pro-Israel lobby.

In June this year, for example, Jourova set up a working group officially dedicated to drafting new strategies against anti-Semitism. The group includes representatives of police forces in EU countries.

That is an ominous step.

The European Union’s work in this area has become guided by a dubious definition of anti-Semitism approved in 2016 by a club of 33 states known as the International Holocaust Remembrance Alliance.

The definition is flanked by highly questionable examples of comments deemed to be anti-Semitic. Among them are the assertion that Israel’s foundation was a “racist endeavour.”

Israel was conceived as a state where Jewish colonizers would have greater rights than the indigenous Palestinians. Palestinians forced out of their homeland when Israel was founded, and their descendants, have not been allowed to return home solely because they are not Jewish.

Recalling those historical facts would arguably be considered anti-Semitic under the definition.

The definition was originally drafted by pro-Israel groups – as part of an EU-sponsored exercise – more than a decade earlier.

In theory, the definition is not legally binding. Involving police forces in assessing comments on Israel can only be seen, though, as an attempt to criminalize those who tell the unvarnished truth about that state’s activities.

Visiting Jerusalem earlier this year, she claimed that two new forms of anti-Semitism can be discerned in Europe since World War II.

The first was right-wing trivialization of the Holocaust. The second was “the left-wing anti-Zionist idea that the existence of the state of Israel in itself is a racist endeavor.”

The allegation was pernicious. She was suggesting that apologists for Adolf Hitler can be compared to activists who oppose Israel’s oppression of the Palestinians precisely because they are outraged by bigotry in all its forms.

Moreover, she was muddling – deliberately, it would appear – two distinct political tendencies.

Far-right hatred of Jews is driven by sheer hatred of people who belong to a different ethnicity or religion. Left-wing opposition to Zionism, on the other hand, is based on a critique of Israel’s state ideology.

It is a moral duty for genuine socialists to tackle Zionism, just as it is to fight any discrimination that Jews encounter based on their religious or ethnic identity.

Last week, von Schnurbein participated in the launch of an Israeli government report that accused the Palestinian-led boycott, divestment and sanctions campaign of anti-Semitism.

Absurdly, the report suggested that my colleague Ali Abunimah had an ulterior motive for calling out Israel’s criminal behavior.

While speaking at the launch, von Schnurbein raised a 2015 incident in which BDS activists asked the singer Matisyahu to denounce Israel during a visit to Spain.

She alleged that it was anti-Semitic to grill Matisyahu about Israel’s activities.

As he is a Jew with US citizenship, Matisayahu cannot be held responsible for what Israel does, her argument went.

Von Schnurbein neglected to explain that Matisyahu has appeared in Israeli propaganda videos and taken part in fundraisers for Israel’s military.

He was challenged about his public embrace of Israel, not because he is Jewish.

Von Schnurbein has been hailed as an “indefatigable heroine” by one pro-Israel lobbyist.

She has been awarded, too, a “human rights prize” from a group that supports Israel’s illegal settlements in the occupied West Bank and its war crimes in Gaza.

It is not hard to work out why she receives such accolades. Rather than fighting persecution, she has pandered to a vicious apartheid state.

David Cronin is an associate editor of The Electronic Intifada; his books include Balfour’s Shadow: A Century of British Support for Zionism and Israel and Europe’s Alliance with Israel: Aiding the Occupation.

Palestinians must have economic window to the world, says Hamas

Israel prison break: An indictment of the occupation

My generation can liberate Palestine and end the occupation

Gaza’s children return to schools scarred by May war

#PalestinianPrisoners: This is not the time to despair

Israeli blockade on Gaza eases, but residents are not hopeful

Zakaria Zubeidi hospitalized due to acute beating by Israeli police

The PA has no business speaking about Palestinian rights

Israel says it has ‘ideological’ dispute with Abbas

Palestinian prison break: Israel has every reason to fear this bold...