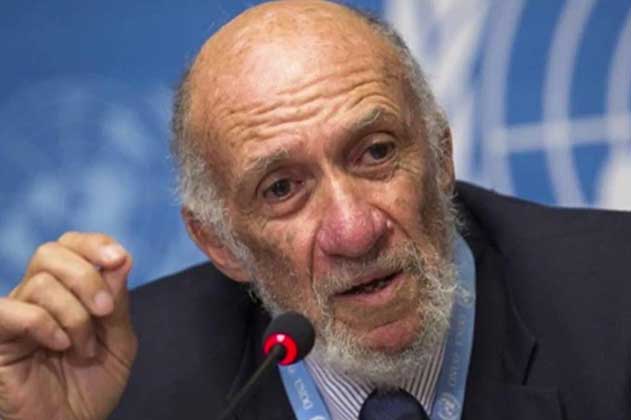 After accusations of Iranian drone attacks on Saudi oil facilities, Iranian officials and authorities indicated that “full-fledged war” with the United States could be imminent, prompting Aramco, Saudi Arabia’s state oil company, to suspend oil production by nearly 6 million barrels per day. US Secretary of State Mike Pompeo referred to the purported aggression as an “unprecedented attack on the world’s energy supply.” The allegations caused other countries to ostracize Iran at the United Nations General Assembly and significantly complicated the prospects of a multilateral nuclear deal.

Richard Falk is professor emeritus of international law at Princeton University and a former UN special rapporteur on Palestinian human rights. In a recent interview, he explained the dangers of escalation, the challenges associated with undoing Obama’s deal with Iran, and the significance of John Bolton’s successor, Robert O’Brien, as national security adviser. Falk also spoke about the American “special relationships” with Israel and Saudi Arabia, and clarified how national security, human rights, and terror are suppressed and compromised in the pursuit of energy reserves.

Can you provide some context for this latest series of headlines regarding the “Iranian threat.” Is this just a matter of “old wine in a new bottle?”

The magnitude of this attack on Saudi oil facilities makes the situation more dangerous even if it is considered as nothing more than a quantitative escalation of Iran’s response to US sanctions. Yet it could be a qualitative escalation if the attack is treated as [a] test of the US commitment to dominance in the region.

At the same time, Trump seems to be inclined, at least for now, to regard the attacks of the Abqaiq and Khurais as nothing other than more of the old wine. [Even] if Iranian responsibility for the attack can be demonstrated… Trump seems intent on avoiding acts that would start a war, and he still, somewhat surprisingly, appears to be keeping the diplomatic door ajar. He has been quoted as saying, probably much to Israel’s chagrin, “I know they want to make a deal. At some point it will work out.” It will not work out if Trump uses this transactional language when approaching the religious leadership of Iran, even if directed at President Rouhani, who leads the moderate forces in Tehran. To talk of “a deal” is to demean the process, and helps explain the deep distrust of any move toward negotiation that was unreservedly expressed recently by Iran’s supreme guide, Ayatollah Khamenei.

With Iran, Trump seems to be caught in a foreign policy pickle. On the one hand, he needs to undo the Obama legacy in the region and the Joint Comprehensive Plan. On the other hand, he runs the risk of looking like a neoconservative. What’s going on in your estimation?

I think you are correct in sensing the conflicting pressures on Trump. Trump’s ideal outcome would be some sort of diplomatic accommodation that he could “sell” as a demonstration that his approach of “maximum pressure” yielded results.

Whether he could spin such an outcome as a victory outside of his base seems doubtful, as there would be many critics who would insist that any such result, even if it disguised the revival of JCPOA with another round of negotiations and a new name, was at best a repetition of what had been [in] 2015. In fact, to get any agreement with Iran there would have to be a much more solid commitment by the US and its allies that sanctions could not be re-imposed in the future without a collective decision by the parties to the agreement, which might possibly also be reinforced requiring a confirming decision by the UN Security Council. If I were negotiating on Iran’s behalf, I would want an ironclad assurance that sanctions could not be renewed by a unilateral decree issued in Washington.

John Bolton was recently fired. Can you talk about his role in the administration to get us to this point? I’m wondering if his dismissal is mere optics and the Bolton-Pompeo foreign policy is firmly in Trump’s hand.

It does not appear that there is any sign of an ideological shift in the White House. Perhaps, the best explanation of Bolton’s dismissal was his fiery independence, which in a sense was at odds with Trump’s insistence on deference from his top advisers and the shaping and reshaping of foreign policy on the basis of a constant search for transactional gains, which treats global policymaking as if it is just a replica of how to succeed in the urban real estate market without trying too hard.

Bolton’s successor as national security adviser, Robert O’Brien, seems to be a milder version of the same hawkish pedigree, and likely more bureaucratic, less acerbic, in style. A few years ago O’Brien published a book of essays [While America Slept: Restoring American Leadership to a World in Crisis] that was highly critical of the supposed passivity of Obama’s foreign policy. In recent years, as State Department coordinator of hostage releases, O’Brien has proven his value by being a Trump enthusiast, which in the present climate is the best credential a person can have who seeks a high-status position in the federal government.

How do oil, sanctions imposed on Iran, and our relations with the Saudis contribute to the rising tensions in the region and the dangerous possibility of escalations?

There is no doubt that the sanctions imposed on Iran, coupled with the repudiation of the JCPOA, have escalated the conflict. It is true that the sanctions have been extremely harmful to social and economic conditions in Iran, a collective punishment mainly inflicted on the Iranian civilian population that violates the UN Charter and international law.

Such punitive behaviour resemb[les] what was done to the Iraq population in the 12 years after the First Gulf War, [that led to] the attack and occupation of Iraq initiated by George W. Bush in 2003, and end[ed] in a costly strategic failure. In the background of the current situation is the Yemen War that has involved strong American backing for a Saudi intervention. It has caused widespread suffering on the part of a largely helpless society, posing a serious threat of massive famine and disease epidemics.

I’ve noticed whenever Trump wants to avoid delivering a foreign policy message and tone that sounds like Bush or Clinton, Vice President Pence trots out there to do the dirty work. Is this, in your view, to promote war with Iran yet try to create an intentional distance from neoliberals and neoconservatives?

As always, it is hard to interpret the logic behind Trump’s moves, or even to believe that a discoverable logic exists. Perhaps, because confronting Iran is a risky kind of diplomatic venture, it is best to put Pence out in front, and thus seek to distance himself from responsibility if there is a policy breakdown. Trump consistently personalizes foreign policy and his leadership role to direct attention to himself by stretching the reality of almost any situation to implausible extremes and as necessary to exonerate himself from distasteful and dysfunctional behaviour by inverting facts and disseminating fake news, while resorting to blatant lies to serve his purposes.

Israel will always be pertinent in figuring out the US “method to the madness” concerning Iran. How can following the US-Israeli alliance help us to get a sense of potential war with Iran? Or has this war already been underway?

The connections with Israel are vital to an understanding of the US role in the Middle East, and especially in the context of Washington’s “special relationship” with Israel and Saudi Arabia. In both instances, it is arguable that these special relationships are contrary to American national interests in the Middle East, and also to America’s professed values.

With regard to the Saudis, their huge investment in the dissemination worldwide of a fundamentalist Wahabist version of Islam would seem radically at odds with the US counterterrorist strategy, especially since 9/11. If Iran’s indirect involvement in the attacks on the Saudi oil facilities is established, then it would allow us to make a challenging comparison with the Saudi involvement in the 9/11 attacks, which according to the official version of the events implicated 15 Saudis of the 19 hijackers.

As for Israel, the relationship has definitely turned Arab public opinion strongly against the US, and made the US continued dominance in the region depend on propping up antidemocratic autocratic leaders. The whole policy of confronting Iran, has for many years, been driven by the Netanyahu leadership, weakening America’s role as global-leader, and risking a war that would be a humanitarian and geopolitical disaster.

How far Israel, as a state, are responsible for the escalated confrontation with Iran is difficult to assess, but it would seem to be substantial. What seems to stand out for me is how supposed American patriots can continue to swallow the toxic “Kool-Aid” of these two special relationships.

Daniel Falcone is an activist, educator, and journalist in New York City