Home nieuws Gaza – casualties in the context of demonstrations and hostilities

[UN Office for the Coordination of Humanitarian Affairs]

Since the 30 March 2018, the Gaza Strip has witnessed a significant increase in Palestinian casualties resulting from the start of the Great March of Return demonstrations. In addition other activities along Israel’s perimeter fence have resulted in increased levels of casualties. This snapshot captures the number of casualties since the start of the Great March of Return on 30 March 2018. The large number of casualties of unarmed Palestinians, the use of live-ammunition and the impact of tear gas canisters all raise concerns of excessive use of force. Exposure of children to violence and the lack of protection for medical personnel are additional concerns. 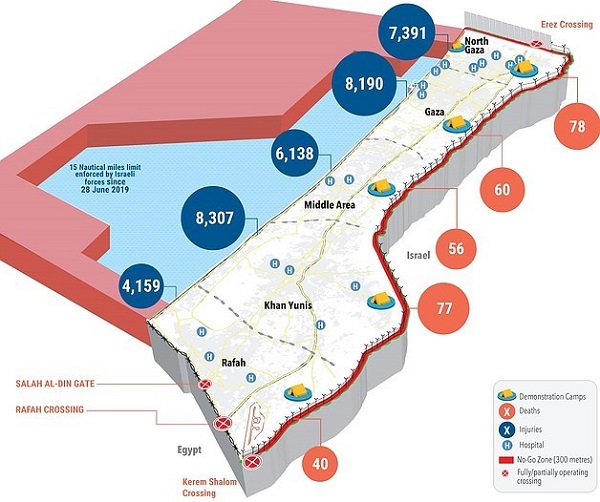 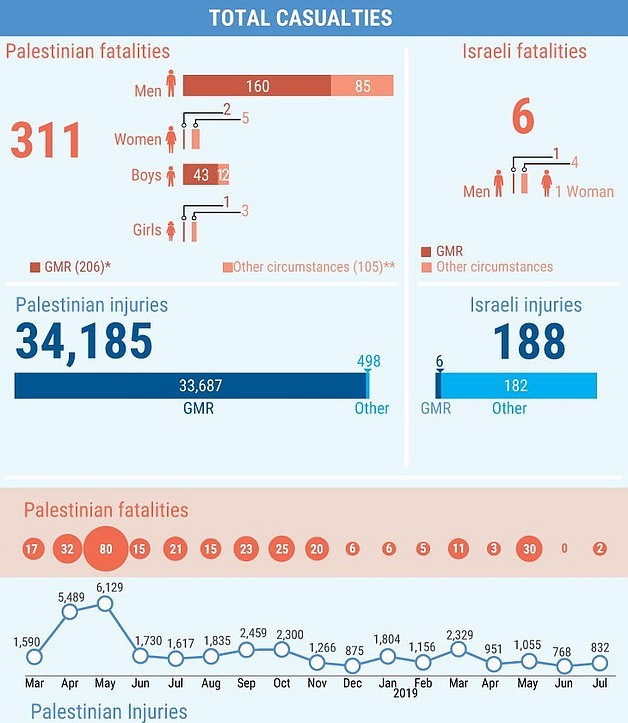 **  Other circumstances casualties include fatalities and injuries reported as a result of airstrikes, tank shelling, opening of fire in the Access Restricted Areas on land and sea, incidents of attempting to infiltrate into Israel, inclusions and land levelling activities.

Disclaimer: Data and analysis provided in this snapshot is based on information at the time of publication and will potentially be amended as new information is received.

Israelis take to streets for fifth week of protests against Netanyahu...

Why Israel’s new and leaderless protest movement is different

[Silwan attack] Palestinian teenager dreamt of being a chef before attack,...

Israeli press review: US to offer help with Iran and normalization...

In latest visit Blinken offers nothing to Palestinians

Netflix and Israel: Did ‘Farha’ sabotage a special relationship?

Tensions simmer among Palestinian prisoners as Israel cracks down

Fight over Israel’s judiciary as Palestinians look on

UN official calls on EU to review definition of anti-Semitism