Home nieuws Next up, a Saudi embassy in Jerusalem 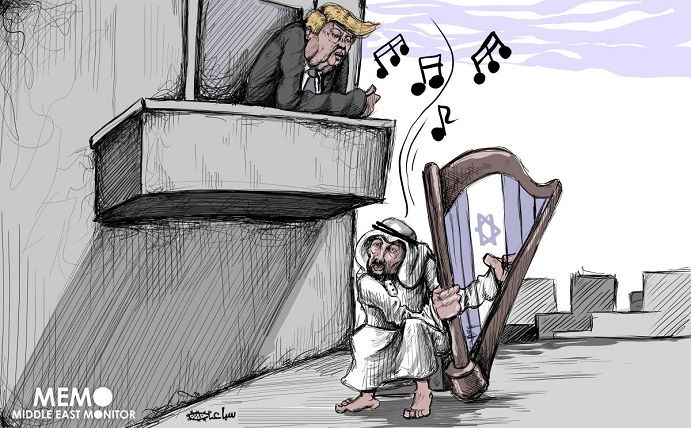 It is open season for Arab normalisation with Israel. The brutal absolutist monarchies which rule in the Arab Gulf countries have increasingly found common cause with Israel in recent years. And this sickening mutual appreciation society for oppressors is only getting more blatant.

Despite not having any formal diplomatic relationship with Israel, I believe that it is now only a matter of time before Saudi Arabia opens an embassy, but not in Tel Aviv. Next up, a Saudi embassy in Jerusalem.

If and when that day comes, we can expect to see the timid criticism of the Saudi government and its maniacal de facto ruler, Crown Prince Mohammad Bin Salman, which occasionally seeps from Western politicians and establishment media to evaporate swiftly. Forgotten will be the grizzly death that “Mohammad Bone Saw” ordered for Jamal Khashoggi, the Saudi journalist murdered at Bin Salman’s command in the Saudi consulate in Istanbul last October. Forgotten too will be the people of Yemen, who for years now have died in their droves thanks to the crushingly brutal Saudi intervention in the civil war in their country.

What’s more, the Palestinian people will not even factor in the considerations of the cynical leaders of Western governments, as they use cliché upon cliché in praise of a Bin Salman “peace” initiative with the racist, occupation Israeli regime. The apartheid military dictatorship that dominates the lives and deaths of millions of Palestinian people, though, does not deserve any kind of validation or recognition.

For more than 70 years, Israel has illegally occupied Palestinian and other Arab lands; imposed military rule in historic Palestine on Palestinian Arabs alone; created a form of apartheid against the indigenous people of the land; and, above all, denied the internationally-recognised right of the Palestinian refugees to return to the homes from which they were driven by Zionist militias.

This Nakba (Catastrophe) began in earnest in 1947 and has continued ever since.

The unjust conditions that Israel imposes on the Palestinians, along with the periodic military invasions and occupations of Arab countries neighbouring historic Palestine, is the perennial reason for popular Arab rejection of the Israeli entity. Israel’s latest unprovoked bombing campaigns across three different countries in recent days only further illustrates this point. It bombed targets across Iraq, Syria and Lebanon in the latest in a long history of such attacks.

Due to such rejection of Israel among Arab people themselves, its far-right government relies on making allies of undemocratic Arab monarchies, secret police forces and militaries, political quislings and the stenographers of Arab power who pose as journalists. Hence last month’s delegation of Saudi and other Arab individuals organised by Israel’s Ministry of Foreign Affairs. The move backfired, with clueless nobody Mohammed Saud heckled by local Palestinians in Jerusalem as he toured the city and its holy places under the auspices of an Israeli government propaganda trip. In viral videos, Palestinians can be heard denouncing Saud, calling him “cheap” and telling him to “go pray in the Knesset”, Israel’s parliament building.

As is quite typical when undemocratic governments in the Arab region want to agitate for more normalisation with Israel, the Saudi line has been open xenophobia against the Palestinian people. “The level of meanness and villainy that the Palestinian people have reached, they have ruined the image of Islam and Muslims,” cursed Abd Al-Hamid Al-Ghabin, a pro-government Saudi tweeter and activist.

Speaking on Israeli TV, Al-Ghabin openly called for Israel to remove Jerusalem’s Islamic holy places from Jordanian custodianship, and made a veiled call for Palestinians to be driven out of Palestine. He claimed that Jordan’s recent warming-up of diplomatic relations with Qatar and Turkey “will not save it from its inevitable fate as an alternative homeland for the Palestinians.”

Compulsory “transfer” of indigenous Palestinians out of their land and into a neighbouring Arab country like Jordan has been the primary goal of the Zionist movement from its inception, half a century before the formal creation of Israel in 1948.

In contrast to this Arab elite trend of normalisation with Israel, some Saudi citizens have been tweeting solidarity with the Palestinians using the Arabic hashtag “Saudis against normalisation”. In a totalitarian state like that run by the Saudi “royal family”, this is a brave gesture.

Such popular pushback is no doubt a large part of why the Saudis and most of the other normalising Arab dictators have not yet established full, formal diplomatic relations with Israel. However, my estimation is that that time is likely to be coming soon. Like Trump moving the US Embassy from Tel Aviv of Jerusalem in violation of international law, plans for a Saudi embassy to be opened there as well are probably already prepared.

Israel’s night raids on Palestinian families aren’t over, whatever the courts...

Israel says Gaza farmers must remove crowns from tomatoes if they...

Aid to Palestinians promised by US blocked by Republican senator

The spirit of resistance is alive and well

Poll: Many Democrats want more US support for Palestinians

The rise and fall of Netanyahu

‘There is no Plan B’, but accolades from Abbas are still...

‘Putting lipstick on a pig’: Why Washington is fawning over Israel’s...