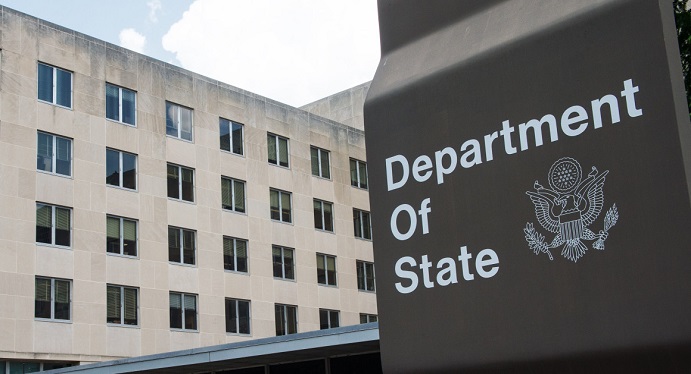 The Palestinian Authority (PA) has slammed the US State Department for removing it from its online list of countries, saying the move constitutes yet more evidence of the US’ alignment with the Israeli right-wing.

Previously the State Department website featured the “Palestinian Territories” under its “Bureau of Near Eastern Affairs: Countries & Areas” web page, where it offered information about the occupied West Bank and besieged Gaza Strip.

However, the newly-updated webpage now makes no mention of the occupied territories or Palestine, referring to Palestinians only once on the “Israel” subpage. This page reads: “The U.S. is committed to supporting the parties in efforts to reach a lasting, comprehensive peace agreement that offers a brighter future to both Israel and the Palestinians.”

Asked about the change during a press conference at the G7 meeting in France yesterday, US President Donald Trump said “you can ask Mike Pompeo”, referring to the US Secretary of State.

The State Department yesterday issued a statement stressing that the move did not constitute a change in US policy, saying only that the website “is being updated”. Pompeo does not seem to have responded to the change.

The decision to delist the occupied Palestinian territories has provoked outrage among Palestinian officials.

Spokesman for Palestinian President Mahmoud Abbas, Nabil Abu Rudeineh, said in a statement yesterday that the decision was “consistent with the extreme Israeli right’s ideas and an unprecedented decline in American foreign policy”.

Abu Rudeineh added that the move “comes in the context of a series of hopeless [US] attempts to erase the Palestinian issue and the people,” which has included recognising Jerusalem as Israel’s capital, moving the US embassy to the Holy City, closing the Palestine Liberation Organisation (PLO) office in Washington DC and downgrading the US consulate in Jerusalem.

Secretary-General of the PLO Executive Committee, Saeb Erekat, also lambasted the move, writing on Twitter that the decision “is not about US national interests” but rather “about advancing the agenda of the council of Israeli Settlers”. “Deciding not to see the truth, does not mean cancelling [Palestine’s] existence,” Erekat added.

Cancelling Palestine (PA, territory ), from the State’s Dept list from the Middle East list, is not about US national interests .
This is about advancing the agenda of the council of Israeli Settlers. Deciding not to see the truth , does not mean canceling it’s existence .

The US decision also echoes rhetoric employed by Israel’s right-wing.

Last week Israel’s Education Minister and Yamina number two Rafi Peretz announced that his party would quit any future ruling coalition if the Trump administration demanded practical steps towards peace; “If Trump wants to speak, he can speak,” Peretz claimed, “[but] if it comes to practical language, we will not stay in a government like this.”

Peretz continued: “Between the [Mediterranean] sea and Jordan, there will only be one sovereign: the State of Israel. We [Yamina] want the Green line not to exist. Trains, roads, housing units will all help towards this. That’s how it needs to be […] We will try to get there, to establish [Israeli] sovereignty for these territories, expand the settlements, build new settlements.”

Yamina is expected to join a ruling coalition following Israel’s upcoming general election on 17 September, in particular should incumbent Israeli Prime Minister Benjamin Netanyahu secure re-election and be tasked with forming the government.

Netanyahu has echoed Yamina’s rhetoric, with officials in the Prime Minister’s Office earlier this month revealing that he is currently pushing President Trump to give the go-ahead for Israel’s partial annexation of the West Bank.

Should the revelation come to fruition, it could constitute a “gift” to Netanyahu’s re-election bid and give him the chance to fulfil his previous promise to annex Area C, which constitutes some 60 per cent of the occupied West Bank.

A day of protest and resistance across Palestine following ‘massacre’ in...

‘Shackled in his bed’: Palestinian child succumbs to wounds sustained from...

After Jenin, is a third Palestinian uprising inevitable ?

‘A mix of sorrow and anger’ – Palestinians in Jenin speak...

Jerusalem, West Bank on edge after outbreak of violence