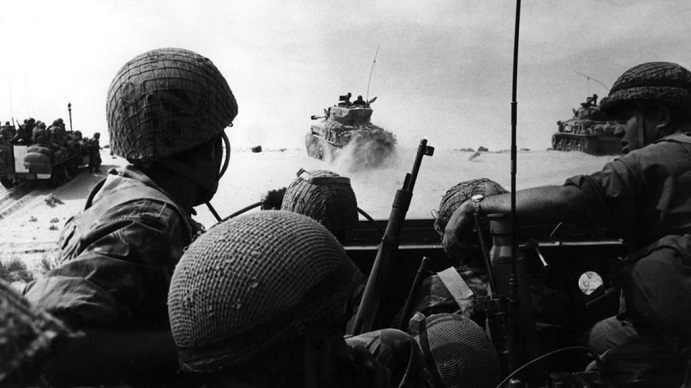 War over Peace, by the Israeli sociologist Uri Ben-Eliezer, raises several questions about the nature of Israeli society, chief among them being: Why has Israel attempted to solve virtually every conflict it has encountered or engendered by military rather than diplomatic means?

His answer might briefly be summarized as follows: War and violence are embedded in Zionist ideology. Its core components – ethno-nationalism and militarism – emanate from an imperative to dominate and control the “Land of Israel” exclusively, without granting Arabs political power.

This imperative cannot be seen simply from a political or economic standpoint but as an outgrowth of Zionism’s settler-colonialist culture. That culture, Ben-Eliezer concludes, relies increasingly on a religiously inspired form of colonial nationalism.

An earlier work by Ben-Eliezer, The Making of Israeli Militarism (1998), explores Israel’s creation as a “nation-at-arms,” a theme that carries over into this book.

War over Peace is complementary in many ways to Patrick Tyler’s Fortress Israel, except the latter fails to account for the ethno-nationalist elements in Zionist ideology pinpointed by Ben-Eliezer.

Although trained as a sociologist, Ben-Eliezer uses a historical lens to examine the evolution of Israel’s culture of “militaristic nationalism.” He constructs a narrative that encompasses early pre-state Zionist colonization, the Nakba of 1947-49, the Suez War of 1956, the 1967 and 1973 wars with surrounding Arab countries, the two invasions of Lebanon, the Palestinian intifadas and the most recent wars against Gaza.

He intersperses reflections on the ethno-nationalist character behind the conflicts with each chapter, but his historical framework tends to dominate this study. As a result, the reader receives more history than sociological analysis, most likely because the author recognizes the need to demythologize the propaganda that Israel has used to portray itself as the underdog David surrounded by Arab Goliaths.

Ben-Eliezer begins his account with an analysis of the pre-state Zionist movement, which he divides into three camps – Labour, Revisionist and binational – paying special attention to the critique of ethnocentric nationalism made by intellectuals within a binational group known as Brit Shalom.

Noting the Revisionist camp’s affinity for European fascism, he attributes the eventual dominance of Labour Zionism to the Holocaust. Ben-Eliezer asserts that the fate of European Jews under Nazi fascism convinced the majority of Zionist settlers to believe military might was essential. Quoting from a Labour Zionist group’s archive from 1943, he highlights their conclusion that a “thirst for strength, a surge for strength, a craze for strength” was necessary.

The quest for military prowess led Labour Zionist leader David Ben-Gurion to advocate for the creation of an army and later for the mass transfer of Palestinians as he anticipated the end of the British Mandate following the United Nations’ recommendation for partition.

Ben-Eliezer dismisses Israeli historian Benny Morris’ claim that there is no documentary evidence proving there was an explicit order for mass expulsions. Ben-Eliezer argues that the existence of such a document is not needed because the intent to expel Palestinians on a massive scale was well understood and accepted among the Zionist paramilitaries and flowed seamlessly from a “state of mind, a cultural perception, an ideology.”

The goal of ethnic cleansing became crystal clear, the author adds, when Israeli forces refused the right of Palestinians to return to their homes long after the creation of Israel. The continuing expulsions in late 1948 and early 1949 had nothing to do with security, he writes. Instead, Ben-Eliezer maintains, these expulsions displayed “a clear ethnonational purpose: to prevent any possibility of future partition” and therefore any Arab claim to the remaining 22 percent of Mandate Palestine. Even then, Israeli leaders sought these territories as part of Greater Israel.

War over Peace drives home the contention made by other historians and scholars that the overriding goal of settler-colonialism is the conquest of the land.

The general staff of the Israeli army planned to acquire more territory as early as 1963, he notes. By then the military had become so powerful that it could override the civilian leadership, which it did by simply ignoring a de-escalation strategy favoured by Prime Minister Levi Eshkol and initiating the 1967 War against Egyptian forces, a course of action that later became known as “the revolt of the generals.”

Israel’s resulting occupation of the West Bank, including East Jerusalem, the Gaza Strip, Egypt’s Sinai Peninsula and Syria’s Golan Heights brought what Ben-Eliezer dubs “Religious Zionism” into the open. What had been an occasional undercurrent used by secular and religious Zionists alike to justify Israel’s actions now emerged as a prominent justification for conquering all of Palestine.

This new religious nationalist movement eschewed security reasons for conquest and instead combined religious and nationalist arguments with the claim that the occupied territories had been given to the Jews by God and therefore could not be relinquished.

Military setbacks suffered by Israel in the 1973 war with Egypt and Syria and during Israel’s subsequent invasions of Lebanon led to a re-examination of this religious-nationalist ethos and to the emergence of anti-war groups such as Peace Now. Casualties suffered in these conflicts resulted in public questioning of whether nationalism was consistent with Judaism.

When a right-wing nationalist threw a grenade into a Peace Now demonstration in 1983, killing one Israeli, Ben-Eliezer describes it as a major turning point: “His murder marked a watershed, after which Israeli society would never be the same. The era of hegemony and consensus of nation-building and state formation, had come to an end.”

The author is less successful in explaining how this watershed moment, which saw the emergence of what Ben-Eliezer terms “liberal” or “civil nationalism,” amounted to only a brief period in Israel’s social history.

Ben-Eliezer acknowledges that the assassination of Prime Minister Yitzhak Rabin by a religious zealot in 1995 and Israel’s failure to live up to the Oslo accords played a role in what he calls a retreat from a more liberal society. This coincided with the re-emergence of religious nationalism in an even more virulent form. But the author is less thorough in explaining why this happened.

Could it be that Oslo and the prospect of partition in the form of a two-state solution amplified, rather than challenged, the foundations of ethno-nationalism?

Regardless, War over Peace deserves attention for its penetrating analysis of the role of culture and ideology in shaping Israeli settler-colonialism.

Rod Such is a former editor for World Book and Encarta encyclopaedias. He lives in Portland, Oregon, and is active with the Occupation-Free Portland campaign.

Israel’s assault on Gaza is an extension of its bloody war...

Gaza: How ordinary Palestinians pay the price of Israel’s assassinations

Funerals and Islamic Jihad battle songs: Gaza after the ceasefire

‘I really wish it will end’: how mothers in Gaza are...

The logic behind Israel’s Gaza attack, if any, is anyone’s guess

Who are Palestinian Islamic Jihad, the militant group targeted by Israel...

Without consequences, Israel will continue to murder Palestinians