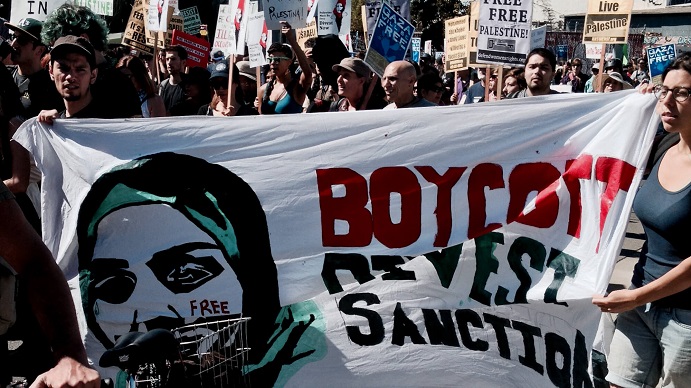 Republicans are trying to criminalize boycotts of Israel, part of a broad push to delegitimize any criticism or pressure on Israel. By not unconditionally defending the right to boycott anything or anyone, Democrats are falling into a dangerous trap.

The United States’ approach to the Israeli-Palestinian conflict has dramatically transformed since Trump took office, but a lot of those changes — from legislation to defund the Palestinian Authority to an attempt to criminalize boycotting Israel — actually came from Congress.

“This isn’t just a matter of the Trump administration, this is trends that have been coming since before the president was elected and have coalesced under him,” says Lara Friedman, an expert on everything Israel-Palestine on the Hill, and president of the Foundation for Middle East Peace.

When it comes to the Trump administration, “we’ve had an extraordinarily coherent and focused and effective policy on Israel-Palestine from Day One. If people are surprised where we are today, it’s because they had either the naiveté or the almost lack of respect for this president to not take him seriously and not take the people around him seriously, because they’ve done exactly what they said they would do,” she adds.

According to Friedman, the Trump administration has de-recognized the Palestinians as a people with a legitimate national narrative, instead engaging with them as individuals with aspirations. “By moving the embassy, by closing the consulate, and by effectively cutting off relations with the Palestinians, by throwing them out of Washington, we now treat the Palestinians as a people represented by the equivalent of maybe a mayor who is spoken to, if he is spoken to at all, by our ambassador to Israel. That’s how far we’ve moved things back.”

So where does that leave us? Where is the fight today? Because it seems like there is a fight going on, and it feels like Israel is at the center of it, and at times it also feels like it’s not about Israel.

Friedman describes how, by rallying around a two-state solution, politicians have established a safe space where they can say they oppose the occupation while ignoring the facts. “It’s been a formula for not doing anything,” she says.

“We’re in a political moment where using Israel to inoculate an illiberal agenda in the U.S. is very handy,” she later adds. What they call anti-BDS legislation at the state level “is not actually anti-BDS, it’s anti-boycotts and it’s anti-free speech, and it applies equally to settlements as it does to Israel, and it’s brazenly unconstitutional.”

The idea of boycotting Israel to pressure it into changing its policies, and the boycott, divestment, and sanctions (BDS) movement and in particular, has turned into a major wedge issue in American politics, explains Friedman. Republicans are pushing radical legislation that would criminalize boycotting Israel, a move opposed by the ACLU and others as unconstitutional — and Democrats are falling into their trap, says Friedman.

“There’s got to be a point when you say, whether or not I adopt this tactic, this is a legitimate nonviolent tactic that we will defend,” she adds.

Democrats need to decide not to throw those in their party who do support boycotts under the bus “in order to make the right, which will never ever be satisfied with our position, feel better about us. We’re never going to be in that tent — we don’t want to be in that tent,” she says.