Today I will be joining Palestinians across the world as we commemorate Al-Nakba; the catastrophe that began in 1947 which saw Zionist militias destroying over 500 Palestinian villages and towns and driving 750,000 Palestinians into exile, including members of my family. You can read PSC’s account of this history here and visit our online resource which gives a comprehensive account of events throughout 1948.

But Nakba Day isn’t just about revisiting history, but also confronting the reality of the ongoing Nakba. Israel continues to demolish Palestinian homes and villages, colonise the West Bank and East Jerusalem with illegal settlements, deny Palestinian citizens of Israel equality under the law, and deny Palestinian refugees the right to return to their homeland.

Now Palestinians face what many are calling a ‘New Nakba’. The details of Trump’s looming ‘Deal of the century’ are already being mapped out on the ground: annexation of the settlements in the west bank; no Palestinian capital in Jerusalem; Palestinians left trapped in network of disconnected Bantustans, permanently denied the right to determine their own lives as a people. Alongside this will be an attempt to persuade the word to redefine the status of refugee so that it is removed from the descendants of those expelled in 1948, thus leaving the majority of Palestinian people cut off from their homeland in a permanent exile.

Israel and Trump believe the Palestinian people can be pressured to accept this in return for huge financial investment. Trump and Israel also believe the world will turn away and simply leave Palestinians to their fate.  But we have shown that we will not let this happen. 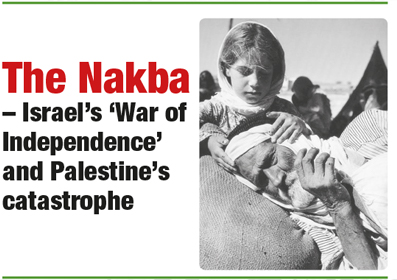