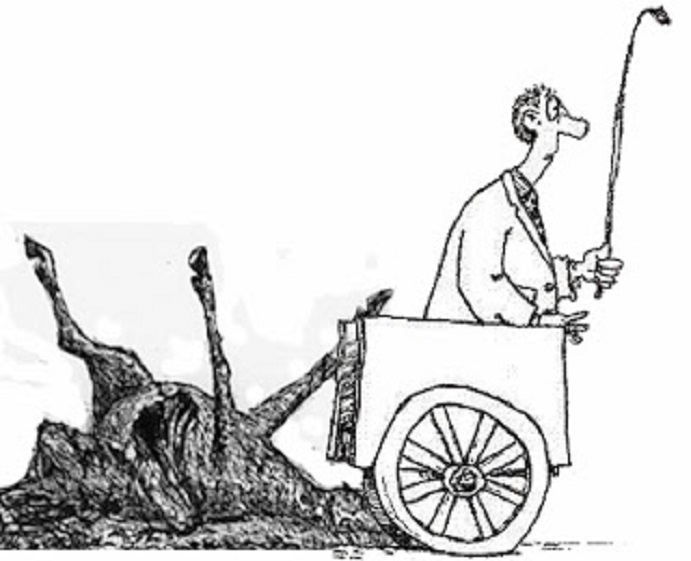 The cart before a dead horse

A while back I was invited to a meeting of Palestinian business and political leaders. One of the prominent speakers was a prominent member of the revolutionary council of Fatah. Wikipedia said he was accused of corruption repeatedly.

The meeting was to address the financially precarious situation of the Palestinian Authority in Ramallah and ways to respond to the Bahrain conference. I heard much “political” posturing and useless talk including an interesting note that the politician said that the authority “cannot” prevent people from going to Bahrain (because then it could be said that the people did not attend because of pressure”.

I commented: If our objection to the Bahrain conference is that it is trying to subvert Palestinian legitimate rights of return to their homes and lands and self-determination via “bribes” of economic improvement, then this is precisely what the Oslo agreements were about. If we disagree with that approach, then we should start by removing all the agreements of Oslo and its appendages like the Paris economic agreement that gave Israel responsibility to continue its economic profiting from the occupation.

Someone asked what is your solution? I said go back to be a real Palestine Liberation Organization: Palestine is all of Palestine not 22% of it, Liberation is self-explanatory and it is for all 13.5 million of us Palestinians, and organization means more than one person we “pledge loyalties” to.

The well-dressed politician came after the meeting to chastise me before he got into his fancy black Mercedes (which was left running all the time) with his body guards. Many of those attending came to tell me that they supported what I said (I told them they should have spoken out in public). Many are genuinely afraid but it is now an existential issue and we cannot remain silent. I told them more people are speaking out. The social media is a very strong tool in our hands.

To be blunt: those who signed on to Oslo I and II and still follow them are no more or less than those who sign on to Bahrain I (yes, there will be Bahrain II). In public speeches they claimed it is somehow a different thing and now putting the cart (economy under occupation) in front of the horse (political solution of two states). Sorry, the cart had run over the horse and killed it back in 1993 (some say the beginnings was in 1974 and 1988).

So it is time to get a new horse proverbial horse (A PLO reclaiming its charter of a secular democratic state), remove the trash that was accumulated in the cart and get a new beginning. It is thus not enough for us to protest things. It is time to take our own initiatives.

It is time for a new PLO that reflects the will of the people and can then harness their amazing power. If anyone wants to know about the amazing power of the Palestinian people to get new horses, please read my book Popular Resistance in Palestine: A history of Hope and Empowerment (2011). In it I explain for example how the uprising of 1936 forced dissolutions of many factions, reshaped others, and created new ones.

We must learn from our history the right lessons. The best lesson to learn is that it is never too late to admit mistakes and go back to the people. I do have real faith in the people. The self-declared leaders know in the deep recess of their calcified hearts these facts and know that risking positions and money is nothing compared to the certainty that if they stay the course, the end will be clear.

* You can compare for example the economic texts of Oslo II agreement signed in Paris,

with the text of the Bahrain “Peace to prosperity” working documents