Home nieuws Discrimination, division and demolitions: Life as a Palestinian citizen of Israel

Palestinian citizens of Israel – who number around 1.8 million people and amount to just over 20 per cent of Israel’s population – are often ignored by the broader Palestinian narrative. Although unlike their compatriots in the occupied West Bank and besieged Gaza Strip, Palestinian citizens of Israel do not live under a formal military occupation, their lives are not without struggle. The community is discriminated against on a daily basis, denied equal access to resources, opportunities, political rights and housing.

So what does daily life look like for Palestinian citizens of Israel? Here are nine things you should know.

Palestinian history is repressed, their ancestral homes given to Jewish-Israelis

Most Palestinian citizens of Israel descend from those Palestinians who were not expelled outside the nascent state of Israel during the Nakba of 1948. This is not to say they were not displaced; many were forcibly driven from their ancestral villages into neighbouring population centres. Yet unlike their compatriots who found themselves in what was then the Jordanian West Bank, the Egyptian-controlled Gaza Strip or neighbouring Lebanon and Syria, these Palestinians were granted citizenship in the new Israeli state.

Today, the Palestinian narrative is repressed within Israel, which refers to 1948 as its War of Independence. Despite the fact that some NGOs such as Zochrot have worked to redress this erasure of Palestinian history running visits to depopulated villages which have since been covered over by national parks, forestation projects or purpose-built towns, discussions of the Nakba in schools, the public sphere or media are limited.

Israel has also sought to quash events commemorating the Nakba. In 2017, it banned the annual march held by Palestinian citizens of Israel on 15 May to remember the plight of their ancestors, and in August last year debated a bill which would see anyone carrying the Palestinian flag imprisoned.

This repression is compounded by the fact that, unlike other Palestinians who are prevented from travelling to Israel, Palestinian citizens of Israel often live mere miles from the ancestral homes to which they are barred from returning. Some Palestinian citizens of Israel have decided to reclaim their homes, for example the descendants of those expelled from the northern villages of Iqrit and Bir’im, who return annually to the village ruins.

Housing is restricted and resources for Arab-Israeli towns limited

These towns are granted fewer resources than Jewish-Israeli towns; a 2015 report by TASC Strategic Consulting and Israel’s Ministries of Finance and Social Equality found that the per capita budget for the residents of Palestinian towns is ten per cent less than Jewish towns “with the weakest socioeconomic profiles”, and 45 per cent lower than affluent Jewish-Israeli towns.

Palestinian citizens are also denied the necessary permits to build their houses. According to NGO Sikkuy, “only 474 buildings in the Arab[-Israeli] community received the necessary legal arrangements in 2018,” a figure it called “a drop in the ocean compared with the 50,000 structures that were built over the years without permits in Arab communities as a result of discriminatory policies”. 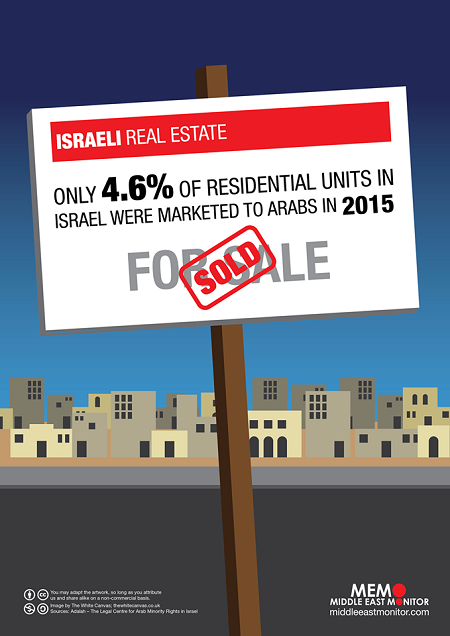 For Bedouin citizens of Israel – the majority of whom live in the south of the country in the Negev (Naqab) desert – restrictions on housing are even more stringent. Most Bedouin villages are deemed “unrecognised” by the state, meaning they are targeted for demolition.

In 2017, Israel passed the “Kaminitz Law” which made it easier for the state to demolish Palestinian citizens’ homes and force the beleaguered family to pay the demolition costs. The law has been called “sadistic” by Ofer Cassif, Knesset member (MK) for Israel’s Arab-dominated political party Hadash, who told MEMO in April:

It is terrible for someone to build their house, often with their own bare hands, and then be forced to demolish it.

Some Bedouin villages such as Umm Al-Hiran and Al-Araqeeb have been demolished hundreds of times and their residents arrested for protesting Israel’s policy. The Palestinians living there are determined to remain steadfast, vowing to continue rebuilding their homes.

The Legal Centre for Arab Minority Rights in Israel – better known as Adalah – has found that several discriminatory laws contribute to this poverty. One example is the 2015 “Amendment No. 163 to the National Insurance Act”, which revokes child allowances from parents of children convicted of security offenses. Adalah explains that the law specifically “targets Palestinian minors who are either citizens of Israel or residents of East Jerusalem, and who are all brought before Israeli civil courts”.

Palestinian citizens are segregated from Jewish-Israelis in school, hospitals

In addition to higher poverty rates, Palestinian citizens are often physically segregated from Jewish-Israelis. Although mixed schools in which Jewish and Palestinian-Israeli children can study together exist, in reality most children attend schools catering for their own community. In 2015, of the 1.6 million school students in Israel, fewer than 2,000 attended the handful of joint Jewish-Arab-Israeli schools.

Further, a report released last month found that this segregation begins at birth, with Palestinian and Jewish mothers separated in hospital maternity wards. Though the hospitals claim this policy is at the request of mothers, several women last year filed a lawsuit which included recordings of hospital staff saying “If there is pressure, we do mix the women, but try to separate them the next day”.

Their career opportunities are limited

However, they struggle to reach high-level career positions. A 2011 report by the Israel Democracy Institute found that “18.2% of Jews employed in Israel worked in banking, insurance and finance, and business services, as opposed to 7.8% of Arabs; approximately 10% of Jewish workers were employed in the high-tech industry, as opposed to 2.8% of Arabs”. Instead, Palestinian citizens of Israel often have low-skilled, low-paid occupations, with 43.3 per cent of male Arab-Israeli workers employed in construction, agriculture and industry.

The career trajectories of Palestinian citizens of Israel are also negatively impacted by the fact that they are exempt from Israel’s military service. When they come to apply for jobs after university, Palestinians citizens are discriminated against for not having served in the army and lack the personal connections often built among Jewish-Israelis during their national service.

WATCH: Arab-Israeli Professor As’ad Ghanem from the University of Haifa

They are prevented from marrying other Palestinians or Arabs

In 2012 Israel’s Supreme Court ruled that the law was constitutional. Adalah slammed the decision, saying: “The Supreme Court approved a law the likes of which do not exist in any democratic state in the world, depriving citizens from maintaining a family life in Israel only on the basis of the ethnicity or national belonging of their spouse.”

Unlike Jerusalemite Palestinians who are only granted residency status, Palestinian citizens of Israel are able to vote in Israel’s election. However, according to Israel’s “Basic Law: The Knesset”, any electoral candidate or party must accept Israel’s character as a “Jewish and democratic state” in order to contest.

Many Palestinian MKs have been targeted by Jewish-Israeli politicians as a result of this law, as they have tried to have them banned from electoral participation. The Balad party – which sees itself as a member of the Palestinian national movement – has been targeted continually, with prominent former Arab-Israeli MK Haneen Zoabi repeatedly attacked.

During Israel’s general election last month, the Ra’am-Balad alliance – comprised of two of Israel’s four Arab-Israeli parties that formerly made up the Joint List – was targeted under this law, with the Central Elections Committee voting to ban the alliance. Though the Supreme Court later overturned the ban, the decision was seen as evidence of the barriers to Palestinian citizens of Israel participating fully in the electoral process.

They are the target of incitement, racism and discrimination

Although martial law is no longer imposed, the rhetoric which motivated its existence remains. This was seen once again during last month’s election, when Prime Minister Benjamin Netanyahu’s Likud party used anti-Arab slogans and PR stunts to depict Palestinian citizens as a threat and dissuade them from going to the polls.

Netanyahu has also parroted the old trope that Palestinians do not belong in Israel because they have “22 other states to go to”. This rhetoric not only ignores the historical presence of Palestinians throughout Israel’s history and prior to the state’s creation, but their status as Israeli citizens who should be afforded the same rights as their fellow Jewish compatriots.