Home nieuws The reasons behind Germany’s condemnation of BDS 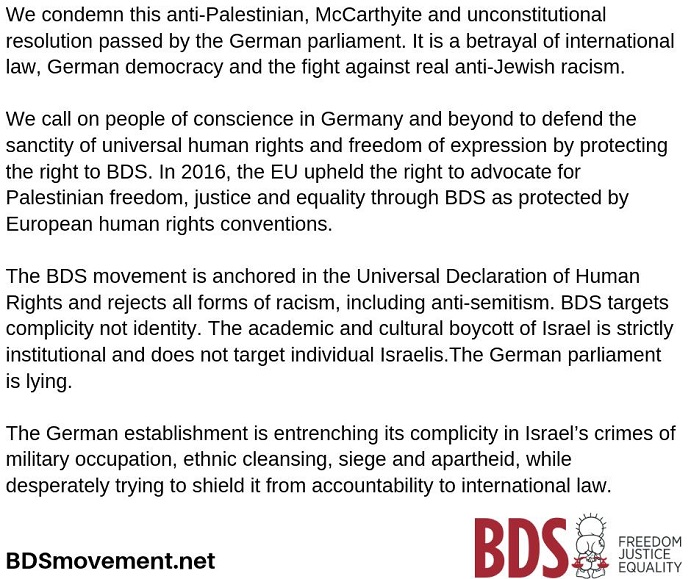 Germany’s resolution is not a first, but follows in the footsteps of similar earlier resolutions, issued by France and the UK

On 17 May, in a stealth move that took many observers by surprise, Germany’s parliament, the Bundestag, passed a resolution condemning BDS as antisemitic.

The non-binding resolution, proposed by the country’s governing centre-right Christian Democrats and centre-left Social Democrats, won the support of various German parties including Liberals and the Greens.

Alarmist articles started circulating shortly after, some claiming Germany is “the first country in the world to criminalise BDS”.

Thus, for example, an interview with the Berlin-based political economist Shir Hever, opens: “The German parliament, the Bundestag, has just passed an unprecedented piece of legislation condemning the Boycott Divestment and Sanctions movement, known as the BDS. They deemed BDS as antisemitic and illegal. This makes Germany the first and only country in the world to criminalise the BDS movement.”

The impulse to criminalise BDS, according to German economist Shir Hever, stems from the desire to overcome one’s guilt over the Holocaust

Hever offers an interesting (if not quite convincing) explanation of Germany’s condemnation of BDS. Recalling that the Israeli Prime Minister Benjamin Netanyahu had twice asserted that it was Hajj Amin al-Husseini, mufti of Jerusalem, and not Adolf Hitler, who first came up with the idea of exterminating the Jews, Hever suggests that Netanyahu was giving the Germans a way out of their guilt over the Holocaust.

“Instead of feeling guilty about the Holocaust and feeling the need to apologise and to bear responsibility for those crimes which were committed so many years ago, you could actually transfer the guilt to the Palestinians,” Hever explained.

“And that is a dogwhistle message to the right wing in Germany,” Hever continued, adding: “But apparently the left, parts of the left, have expressed some desire to rid themselves of their guilt over the Holocaust by equating the BDS movement, which is a Palestinian call, with antisemitism. Of course, it’s not antisemitic.

“But by doing that they’re saying, oh, we’re fighting antisemitism by choosing to support Israel, the state of Israel, rather than by being responsible for the protection of Jewish people.”

The impulse to criminalise BDS, then, according to Hever, stems from the desire to overcome one’s guilt over the Holocaust.

Another Berlin-based activist, Israeli dissident and BDS supporter Ronnie Barkan, offers a more cogent explanation for why parts of the German left supported the anti-BDS legislation: it is racist.

We must understand that, as the BDS movement recently reminded people, ‘BDS targets complicity not identity’

Barkan compares Germany’s anti-BDS resolution with Israel’s nation-state law. Just as the nation-state law merely codified the country’s latent racism, Barkan wrote, without in any way changing anything about it, the fact that it was finally put in simple words, stripped of its “Orwellian libZionist language” awakened any delusional onlookers who had hitherto believed in “Israeli democracy”.

Similarly, Barkan argues, Germany’s anti-BDS motion merely reveals the true nature of the German people, who remain deeply racist. Barkan’s ire, however, is directed at the German left, which he says is deeply complicit in silencing dissent and activism for Palestinian rights.

Indeed, this departure, on the part of a European left group, from support for Palestine, had been noted a few years earlier in a Jacobin article titled “The German Left’s Palestine Problem”, which points out that, among other major betrayals, Die Linke’s chairman in Berlin, Klaus Lederer, had spoken at a pro-Israel rally during the 2008–9 war on Gaza.

This was not an isolated event. In his role as “cultural senator”, Lederer has also sought to cancel other pro-Palestine events, such as last year’s “talk with Manal Tamimi”, organised by “Women Under Occupation” group.

Along with Stavit Sinai and Majed Abusalama, Barkan is a member of the “Humbolt 3“, who recently faced charges for disrupting a talk at the University of Humbolt by an Israeli Knesset member who supported Israel’s 2014 assault on Gaza.

In his court statement, Abusalama explained: “The thousands of Muslims and Palestinians in Germany do not feel safe to speak up. They feel they could be persecuted at any time, simply for shouting “Free Palestine” or dreaming to return freely to their homes, in accordance with the UN-mandated right of return. They fear persecution for calling for equality, dignity, freedom and justice in Gaza.”

Whatever the complex reasons for the German left’s departure from popular support for Palestinian rights, some falsehoods around this latest resolution need to be addressed. First, as Middle East Eye points out, the move is non-binding, strictly symbolic.

In other words, Germany has not “criminalised” BDS, it has passed a resolution (falsely) condemning it as antisemitic. Second, the resolution itself is not a first, but follows in the footsteps of similar earlier resolutions, issued by France and England.

In 2015, France had fined a collective of BDS activists $14,500 plus court fees for promoting BDS in a supermarket, arguing that because BDS is inherently “discriminatory” on the basis of national origin, it is a crime to advocate it.

And in 2016, Britain legislated a ban on public entities boycotting Israeli products. Thus, so far, the only “criminalisation” of BDS has taken place in France, where a fine was imposed on activists.

However, despite the French court system’s declaration that BDS is inherently discriminatory, we must understand that, as the BDS movement recently reminded people, “BDS targets complicity not identity”.

Indeed, many of the targeted companies, such as Caterpillar, Hewlett-Packard and G4S, are not Israeli.

In the US, every attempt at implementing state resolutions banning BDS has been successfully challenged in the courts, as shown in a recent Washington Post article aptly titled “Anti-BDS laws are popular. That doesn’t mean they’re constitutional”.

The most recent such successful legal challenge of a state-imposed BDS ban was in Pflugerville, Texas, where a teacher, Bahia Amawi, sued the school district for not renewing her contract when she refused to sign a clause declaring that she would not engage in BDS.

In April 2019, Ms Amawi won a significant victory when the judge imposed an injunction against the anti-BDS law which would strip her of her civil rights and employment.

Nevertheless, as one can expect anti-BDS legislation to be discussed and voted on in various European and North American countries (the Canadian government has also condemned BDS), some points are worthy of reiteration and clarification.

It follows that claiming that the BDS movement is “antisemitic” is tantamount to claiming that “Semitism” (technically a linguistic family shared by many national and ethnic groups, but for all purposes here, an ethnicity) is inherently a supremacist settler-colonial racial sub-group that violates international law.

Obviously, the very logic of such a claim is faulty on multiple levels.

Second, with regards to the claim that BDS seeks to “delegitimise” Israel, as it pressures it to abide by international justice, one must ask why a country feels threatened by a demand that it respect human rights.

Justice is only a threat to injustice. If Israel as a country is threatened, feels “delegitimised” by demands that it abide by international law – which is all that BDS seeks to accomplish – than clearly that country is in egregious violation of international law.

Ultimately, whether boycotting Israel is criminalised or not, the “legality” of a movement, ideology, policy, or practice is no indicator of its moral integrity. Apartheid was the law, until it was abolished.

So was slavery. And, to return to the German context, so was the Holocaust. Even if BDS were to become illegal, a crime, it would not be immoral. When the law sides with the oppressor, those resisting it and seeking to change it have the moral high ground.

Nada Elia is a Diaspora Palestinian writer and political commentator, currently working on her second book, Who You Callin’ “Demographic Threat?” Notes from the Global Intifada. A professor of Gender and Global Studies (retired), and is a member of the Steering Collective of the US Campaign for the Academic and Cultural Boycott of Israel (USACBI)