Home nieuws War on nature: How Zionist colonialism has destroyed the environment in Palestine

The latest casualties in the war on the environment in Palestine were 450 olive trees destroyed last week by Israeli army bulldozers. The destruction of the Palestinian-owned trees took place in the villages of Bardala, in the Jordan Valley, and Yatta in the southern West Bank. Dozens more were also destroyed by illegal Jewish settlers.

It is a myth that only Zionist Israel “made the desert bloom.” On the contrary, since its establishment on the ruins of more than five hundred Palestinian villages and cities that it has destroyed and wiped off the map, Israel has done the exact opposite. The land inhabited by Palestinian Muslims, Christians and Jews for thousands of years has been disfigured beyond belief by Israel in the matter of a few decades.

“Palestine contains vast colonisation potential which the Arabs neither need nor are qualified to exploit,” wrote one of Israel’s founding fathers and first Prime Minister, David Ben Gurion, to his son Amos in 1937.

Zionist Israel, however, has done more than just “exploit” that “colonisation potential”; it has also subjected historic Palestine to a relentless and cruel campaign of destruction that is yet to cease. This is likely to continue as long as Zionism prevails as a racist, hegemonic and exploitative ideology. 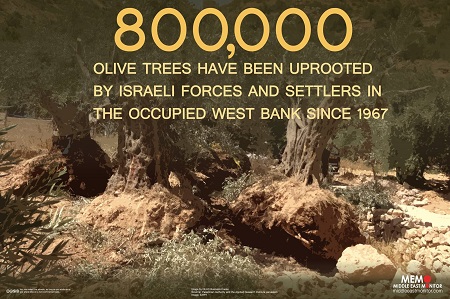 Since its very early days, in the mid and late 19th century, political Zionism has misled its followers in its depiction of historic Palestine. To encourage Jewish migration to Palestine and by way of providing a semblance of moral justification for Jewish settlements, Zionism constructed myths which remain a central theme to this day. According to early Zionists, for example, Palestine was a “land without a people for a people without a land”. It was also said to be an arid desert, awaiting Jewish colonialists from Europe and elsewhere with the urgent mission to “make it bloom”.

What the Zionists have done to Palestine, though, is rather inconsistent with their intellectual discourse, as racist, colonialist and exclusivist as it always has been. The land of Palestine, around 10,425 square miles from the River Jordan in the east to the Mediterranean Sea, became the subject of a cruel experiment, starting with the ethnic cleansing of the Palestinian people and the destruction of their villages, land and crops in 1948. This exploitation of the land and its people has grown with intense fervour through subsequent generations.

Illegal Jewish settlements in Occupied East Jerusalem and the West Bank are built on confiscated Palestinian agricultural and grazing land. The immediate impact of such action was the uprooting of millions of olive and fruit-bearing trees, and the consequent soil erosion in many parts of Occupied Palestine.

Armed settlers attack Palestinian farmers throughout the West Bank, often under the protection of the Israeli army. One of their main missions is to uproot Palestinian trees and set orchards ablaze in an attempt to force Palestinians to leave, as a first step before stealing the land and building more illegal settlements.

To get an idea of what this means on a micro level, read part of the testimony by Palestinian farmer Hussein Abu Alia, published in a study by the UN Office for the Coordination of Humanitarian Affairs in the occupied Palestinian territory (UNOCHA OPT):

“…In the beginning, we caught the settlers stealing olives from our trees. Then they started breaking off the branches, but they grew back and we also planted new trees to replace those damaged. Then, three years ago when we went to pick our olives, we were shocked to find the trees all yellow and dried up… Settlers had drilled into the trunks and injected them with a poisonous substance that killed the trees from the roots up.”

Drying up the River Jordan

The illegal Jewish settlements consume huge amounts of the already depleted Palestinian water resources. In fact, water control was one of the first policies enacted by Israel after the establishment of its military occupation in 1967. Israel’s discriminatory policies regarding its uses and abuses of water are known as “water apartheid”. Reckless Israeli water consumption and erratic use of dams have a vast and possibly irreversible environmental impact, fundamentally altering the aquatic ecosystem.

“Due to new earthen work dams being constructed to give farmers [that is, illegal Jewish settlers] in the north access to water,” reported Israeli Ynet News, “flow rates in the Jordan River have decreased significantly.”

Such media reports of Israel’s destructive impact on the Jordan have been a news staple for years.

Residential, agricultural and infrastructure construction by and for Jewish settlers is itself an environmental disaster. There is a significant impact on the local biodiversity of the West Bank.

Land levelling and excavations alter the soil and have a tremendous impact on agriculture. Moreover, they also interrupt the uniformity of the landscape and the organic relationship between human beings and their natural surroundings.

Israel shows no respect to Palestine and its people. The colonial Zionist state is destroying local habitats, animals and species that are unique to the region.

According to a study conducted by the Environment Office of the Israeli Civil Administration in the West Bank, around 145,000 tons of domestic waste is generated daily by Jewish settlers. Unsurprisingly, much of this waste, including sewage, is dumped on Palestinian land with no regard whatsoever for the Palestinian environment or the people and animals living there.

In 2016 alone, 83 million cubic metres of wastewater flowed throughout the West Bank. That number is increasing constantly and rapidly.

What’s more, the harm inflicted on the environment by Jewish settlements exceeds the physical space of these illegal colonies. Over the years, Israel has constructed a massive network of roads linking illegal settlements to each other and to Israel. The aim is to provide “safe passage” for Jewish settlers. These bypass roads are only for use by Jews; Palestinians are prohibited from utilising them for any purpose.

The so-called “safe-passages” completely encircle many Palestinian villages in the occupied West Bank, and their construction required the confiscation of hundreds of acres of fertile Palestinian land. Moreover, Palestinian farms located within these bypass roads eventually became inaccessible to their owners, and are thus either left uncared for or seized by Israel for “security” reasons.

Israel’s war on nature goes beyond the illegal Jewish colonies. The Zionist state’s use of depleted uranium, white phosphorus and other types of toxic munitions has killed and wounded thousands of Palestinians, mostly civilians in the besieged Gaza Strip. Furthermore, this has also destroyed the environment in ways nearly impossible to reverse.

The massive military offensives against the Palestinians in Gaza over the course of the past decade have left horrific scars on the people and their environment. The untold number of bombs and missiles fired by Israel in air strikes in 2008-2009, 2012 and 2014 have left a high concentration of toxic metals in the soil.

According to the New Weapons Research Group — a group of independent scientists and doctors based in Italy — metal fragments left behind by Israeli weapons include tungsten, mercury, molybdenum, cadmium and cobalt. All are toxic elements that are reported to cause cancerous tumours, infertility and serious birth defects.

The environment in Gaza is not spared a terrible fate even when military offensives and incursions end, albeit usually temporarily. Indeed, the Israeli Army regularly sprays herbicide close to the fence separating the besieged territory from Israel. The most commonly used herbicide is glysophate.

The Red Cross has warned that the damage caused by Israel’s habitual spraying of herbicides in border areas goes beyond the destruction of Palestinian crops. It also causes long-term health complications for the people living in the Gaza Strip.

The price of the Apartheid Wall

While the Apartheid Wall, which Israel has been building on Palestinian land in the occupied West Bank, is often viewed from a political or human rights angle, its environmental impact is rarely addressed.

However, for the Apartheid Wall to be built, tens of thousands of olive trees, some of which were 600-years-old, were uprooted by Israeli bulldozers. The fact that some of these trees were protected under international cultural heritage law hardly slowed the Israeli army down. The destruction continues to this day.

To make space for the Wall, thousands of acres of Palestinian land have also been burnt, along with their trees and adjacent habitat. In their place, Israel has constructed a massively fortified eight-metre high wall, totally alien to the Palestinian landscape and accompanied by the paraphernalia of occupation, including watchtowers, electric fences and surveillance cameras.

Is this the “vast colonisation potential” that Ben Gurion boasted about over 80 years ago?

The truth is, Palestinians proved themselves to be far more “qualified” to co-exist with nature rather than “exploit” it, as the Zionists have done. The cost of this exploitation, however, is not only being paid by the Palestinian people but also by the environment. The evidence before our eyes further accentuates the colonial and selfish nature of the Zionist project and its totally visionless founders.