Home nieuws ‘The End’: Anti-normalisation, Islamofuturism and the erasure of Palestine 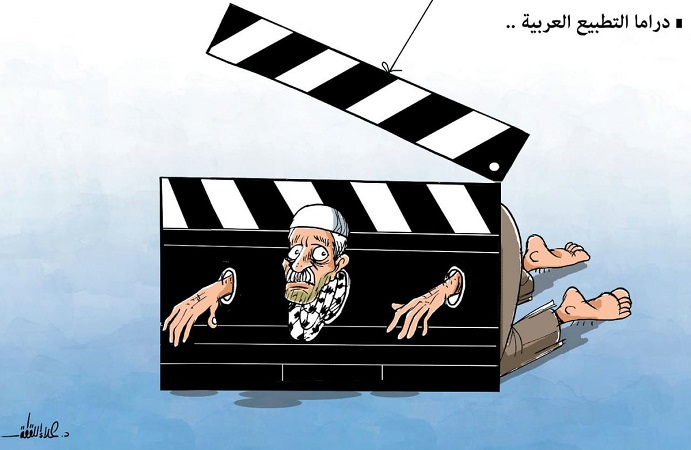 The End (El-Nehaya), the Egyptian dystopian science fiction thriller series, has captured the imagination of audiences throughout the Arab world this Ramadan TV season. It is ranked the third most popular series this season, and has generated a lot of discussion in social media about its futuristic technology and debt to Hollywood science fiction and dystopian films.

The End was also lumped into the debate over normalisation in this year’s Ramadanic TV programming and was attacked by the Israeli Foreign Ministry for its anti-normalisation stance. The End is premised on the fictional idea that the Arab world would become a superpower and that Israel would be destroyed less than a century into its establishment — that is, in less than thirty years. In its place, Al-Quds conglomerate will be created and will be under total Arab control.

As Palestinian, Arab and world leaders fail to push back against Trump’s deal of the century and the Israeli government’s plan to colonise and annex more Palestinian land, the fantasy resonated with Arab audiences. Some contrasted the daring futuristic scenario with the utter impotence of the Arab world today, to offer any viable solution to the Palestinian struggle for freedom and the ongoing Nakba. Others thought it was enough that the series managed to provoke and infuriate Israel.

However, these visceral reactions completely ignore the dystopian context in which these themes are developed. It is puzzling, for example, to read that the series: “Contains futuristic themes replete with hope and optimism for the entire Arab region.” There is nothing redeeming about the post-liberation dystopia imagined in this series.

Part of the excitement about The End in social media can be attributed to the total disconnect between the nostalgic celebration of past Arab victory and the dystopian present of the Arab world in 2120. In a controversial scene that received wide accolades on Arab social media and drew the ire of the Israeli Foreign Ministry, a history teacher inculcates in his students the events that led to the destruction of Israel.

By 2048, the teacher explains “what was known as” the Arab countries became a political and economic power to reckon with. Moreover, the US empire had collapsed and was divided into three different warring blocs.

Consequently, Arab countries were able to defeat their arch-enemy, “the Zionist state of Israel”, in the war of the “liberation of Al-Quds” less than a century into its establishment. Israel’s Jewish citizens, the teacher clarifies, were relocated (it is not clear whether it was forcibly or voluntarily) to their European countries of origin and other destinations around the world.

However, the nostalgic celebration of Arab triumphalism is short-lived. The security forces of Energy Co., one of the corporations that rule over Al-Quds conglomerate, soon ambush the underground school for violating the selective education code of the jurisdictional administration of the noble Al-Quds conglomerate. They arrive in a space shuttle, blast the school’s door, kill one of the children who was trying to escape, round up the others and ship them to a labour camp (factory) and the corporation headquarters, and banish the teacher to one of the nuclear wastelands in the southern part of West Africa.

The series is set in the dystopian reality of the Arab world in the post-liberation era. Arab countries as we know them today do not exist anymore in the geopolitical map of the dystopian world in 2120. They were dissolved and became a part of the Western bloc, which includes Europe and other countries, in a world controlled by corporations and technology.

Ironically, the liquidation of Israel in The End did not bring an end to the oppression in Palestine or the Arab world in general.  Around 2090, Al-Quds conglomerate became the main site for a robocide, the genocide in which humans eliminated all robots after one of them terminated its owner. Consequently, laws were passed to ban the production of robots and the development of AI. The series merely substitutes one form of domination and apartheid for another.

After the elimination of the majority of the robots, the all-powerful Energy Co. was established in Al-Quds conglomerate. The corporation employs algorithmic governance, using surveillance technology, facial recognition software and military drones to track and control citizens. Its security forces regularly attack and brutalise citizens. One form of oppression is gone, but Palestine and the Arab world do not live in liberty yet.

Even in the region that metonymically refers to their ancestral homeland, the Palestinians are nowhere to be found. The people who live in Al-Quds conglomerate speak Egyptian colloquial Arabic, and no one seems to be taking pride in their Arabic cultural heritage or Palestinian identity.

Furthermore, the residents of Al-Quds conglomerate are represented in very negative terms. The global capitalist class and elites, who live in the Oasis megalopolis in an undisclosed location, look down upon them and refer to them as uncivilised and barbarians. The son of the president of Energy Co., who lives in the Oasis, also told the protagonist that: “Life in Al-Quds is not fit for human beings.” Indeed, one major plot line in the series deals with the protagonist’s task to invent an energy source that can power a dome that will protect “humanity” in the Oasis from the hordes and barbarians.

The other noticeable feature about the representation of life in Al-Quds conglomerate is its patriarchal gender politics. Women and men follow a rigid division of labour, even professional women who have careers. Radwa, the protagonist’s wife, works as the principal (agricultural) engineer at Green Co., the company responsible for providing food supplies to Al-Quds conglomerate, but she has to perform the domestic chores in the house.

The first thing we see Radwa the engineer do in the first episode of the series is load the laundry in a futuristic washing machine. Even the robot, who first performs the role of a Stepford husband, cannot escape these sexist gender politics. When he builds a house for Sabah, the woman who created him after the love of her life, the protagonist energy engineer, marries her boss Radwa, the first thing he notes about it is the availability of a washing machine.

In the other major plot line in the series, the robotic alter ego is planning to wage a war against humans and build a new society that will be ruled by him and his “mother-queen” Sabah. She places herself in the position of the romantic victim and helps him create an army of robots they call “our children”.

Men still have the sole right to divorce women, who could not still remarry until they have completed the common waiting period in Sharia law. In 2120, Radwa could not still divorce her husband (who, in fact, was his robotic alter ego), when she discovered that he had an extramarital relationship with Sabah. Radwa is so clueless that she cannot even tell the difference between her husband and his robotic alter ego, despite the clear change in his masculine attitude and behaviour.

Nonetheless, the series toys with the taboo topic of sex and subverts the ideal monogamous marriage system. Firstly, for all practical purposes, Radwa lives with two different men in a polyandrous relationship. Secondly, Sabah creates the robotic alter ego with the help of a spare bionic prostheses dealer, who turns out to be a robot himself, and programs him to be her husband. She downloads the engineer’s consciousness onto the robot’s artificial brain and adds fake memories for him.

Sabah actualises her Jocasta complex, by breaking the taboo of incest and marrying her own son. The robotic alter ego clearly functions as a sex bot, which is meant to satisfy Sabah’s robosexual desires and provide her companionship and intimacy. There is evidence to suggest that Sabah is another robot, but she is portrayed as an insane jilted lover. These sexist gender politics will never see an end.

Despite these subversive ideas, the dystopian world of the series is deeply steeped in Islamic culture and traditions. If Afrofuturism, for example, is “rooted in and unapologetically celebrate[s] the uniqueness and innovation of black culture,” this series is clearly grounded in Islamofuturism.

Aspects of Islamic culture are abundant in the series. We see a veiled woman on a bus early on in the series, characters routinely repeat typical Islamic incantations and idioms, and divorced women have still to follow the dictates of Sharia law before they could remarry. Even the Oasis, where the protagonist suspects a new religion is founded, recycles elements of Islamic history. No one knows the origins of the founder of the Oasis, for instance, but his nickname is “The Truthful” (after the first Caliph Abu Bakr).

These problems with The End do not disqualify the series. The most interesting aspect of the series is its unwavering identification of Al-Quds conglomerate with the struggles of the people who are excluded from the system that the Oasis elites and the global capitalist class want to create for themselves. The dystopian format of this series thus links the condition of the “worst-off” in Al-Quds conglomerate to the class struggle, and other profound issues in the region and the world.

The series illuminates and raises questions about these significant matters that have affected humanity in the last few decades. These issues include not only the polarisation of wealth and the cupola created in the global apartheid, but also neoliberal algorithmic governance, the naturalisation of AI (as both human surrogates and sex bots), the rise of megalopolis cities as corporations, renewable energy and ecological sustainability.

There are no easy answers to these questions in the series. Ideologically speaking, it is not clear where the series positions itself on the question of the state and the military. The series could be said to displace its critique of state surveillance and military control onto futuristic corporations. However, the series itself is produced by Synergy, a mega-entertainment production house that has monopolised the Egyptian media sector and has ties to Egyptian intelligence.

Instead of resolving these questions one way or another, The End manages to represent the radical changes sweeping the Arab world through the screen of fantasy. It filters Arab audiences’ unconscious fears and anxieties about the traumatic socio-political and cultural crises that are tearing the Arab world apart, through traditional dystopian and science fiction tropes and novum. This is a wonderful opportunity to engage the universal dimensions of the Palestinian struggle for freedom.

Jamil Khader is the Dean of Research and Professor of English at the University of Bethlehem in Palestine, as well as the Editor of The Bethlehem University Journal