Home nieuws PA accused of being ‘a police state’ over its detention of Palestinian... 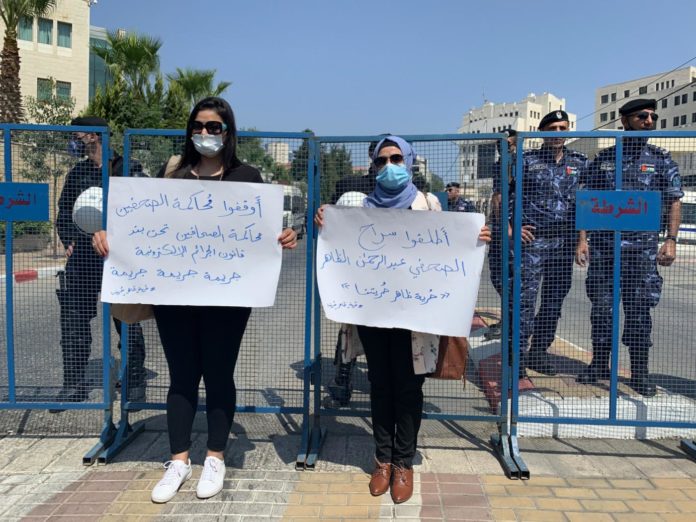 The Palestinian Authority has carried out 30 political arrests, 33 summons for interrogation and nine raids since August.

In front of the Palestinian Council of Ministers building in Ramallah, 66-year-old Asaad Thaher walked with his cane past dozens of riot police and iron barricades to take a seat and catch his breath.

Thaher had come from his hometown, the northern Palestinian city of Nablus, about an hour’s drive, to the Palestinian Authority (PA) headquarters in Ramallah to demand justice for his son Abdel-Rahman.

The 38-year-old filmmaker has been held in PA detention cells since 19 August, when he was arrested by the preventive security apparatus.

“I have not heard anything about Abdel-Rahman. I have not seen him since he was arrested,” Thaher told Middle East Eye. “[I feel] a lot worry and fear for him… I don’t have a single piece of information to ease my worries,” he said before he choked up with tears, unable to continue speaking.

Instead he surveyed a group of about 50 journalists who had taken a solidarity stand on 9 September, along with Abdel-Rahman’s family, in front of the office of Prime Minister Mohammed Shtayyeh. They called for the detainee’s release, protection of free speech and expression, and an end to the PA’s detention of journalists and activists.

Abdel-Rahman was arrested on the evening of 19 August as he was leaving his workplace at the An-Najah media centre in Nablus where he produces and presents a number of TV programmes.

PA security forces raided his home the following day at 1am and confiscated his equipment, laptop and files.

“The raid was monstrous. My children, one is four years old and the other is eight, saw their father with his hands tied and in such a downtrodden state,” Abdel-Rahman’s wife, Rasha, told MEE.

“This has caused them a great deal of psychological harm. I couldn’t explain to them what was happening.”

The film director holds a BA in architecture, yet has long worked in the media and arts field as a journalist and presenter, with programmes on channels including the Jordanian Ro’ya TV, local Wattan TV and the UK-based Al Araby TV. Abdel-Rahman has also produced a number of documentaries and satirical shows.

Nearly one month on, Abdel-Rahman remains in detention on charges that include “defaming authorities”, according to his lawyer Muhannad Karajeh from the Ramallah-based Lawyers for Justice group.

The status of the case is pending, with the court continuously extending his detention based on requests from the public prosecution to “continue the investigation”.

“Abdel-Rahman did not commit any crimes. They are interrogating him about his artistic and media work only,” said Rasha.

Karajeh explained to MEE that he has not yet been able to meet with his client in person, and therefore does not know details around the conditions of his detention and interrogation. The lawyer was also prevented from viewing the entire investigation file and obtaining a copy of it.

“I was allowed to see only parts of the investigation file, and they all revolve around his artistic and media work, which is critical of the Palestinian Authority and its conduct, and these are works that have been broadcast on Ro’ya and Al Araby TV channels,” Karajeh told MEE.

The lawyer said they are also accusing Abdel-Rahman on the basis of vague activities such as “starting a WhatsApp group,” and “communicating online with influential people outside Palestine,” and that most of the interrogation was about his work from before 2016.

According to the file that Karajeh viewed, one of the questions that the chief prosecutor asked Abdel-Rahman was: “What is your definition of freedom of opinion and expression?” which Karajeh said indicates, along with the facts of the whole case, that his detention is about his expression.

Lawyers for Justice said Abdel-Rahman’s continued detention stands in violation of the Palestinian Basic Law, which guarantees freedom of opinion and expression.

In a statement, the group said “what is being attributed to Thaher does not deviate from a natural exercise of freedom of opinion and expression,” and categorised his arrest as “arbitrary”.

PA security forces have refused to comment publicly on the case or provide any information to journalists.

Karaja emphasised that so far authorities have dealt with Abdel-Rahman in ways that ignore guarantees of a fair trial, such as lawyer visits, and prohibitions on getting a copy of the file and denying his release.

“Abdel-Rahman’s interrogation period is over, but the preventive security continues to demand more extensions of his detention on the pretext of pending investigation,” he added.

Rasha has only been able to visit Abdel-Rahman once, for half an hour, since his arrest. She said her husband tried to reassure her but that “he never looked fine”.

“He was trying to appear strong but he was different and afraid to talk,” she added. On seeing him in court, she said he “showed signs of fatigue, exhaustion and illness”.

The family later learned that their son had been taken to the hospital at least once.

The state of emergency imposed by the PA since March to confront the spread of the Covid-19 has been marked with continued political arrests against a background of violations of freedom of expression, despite statements by Shtayyeh promising to safeguard free expression rights.

The Committee of Families of Political Prisoners in the occupied West Bank condemned violations by security services of basic human rights, most notably the continuous renewal of the state of emergency in breach of the Palestinian Basic Law. The committee said in a statement that they have witnessed an increase in violations by the PA since August, including 30 cases of political arrests, 33 summons for interrogation and nine raids on homes and workplaces.

Human rights activist and journalist Majdouline Hassouna told MEE that she believes that Abdel-Rahman’s continued detention, and the investigation into his artistic and media productions, is a major escalation against the freedom of journalists, and freedoms of opinion and expression.

“The attacks on journalists by the PA has never stopped. However, it seems clear today that they will escalate and become systematic,” said Hassouna. “It is easy for the security services to accuse us of belonging to some party and fabricate charges to provide cover for detaining us over our rights to our opinions, expression and journalistic work.

“Today there is no judicial or political structure that pressures the security services to release Abdel-Rahman. We have turned into a police state,” she said, adding that she and her colleagues plan to turn to embassies and consulates to pressure for his release out of fear that he may be undergoing torture or blackmail for confession extraction.

Shatha Hammad is a Palestinian freelance journalist; in June 2020 she won the New Voice award at the One World Media Awards for her reporting from the West Bank

[on his way out] Israel’s Yair Lapid urges foreign states to...

International Day of Solidarity with the Palestinian People

Undercover Israel soldier leaves Qatar after his past revealed

As the world fixates on Ukraine, another war is brewing in...

How art, literature and film inspired a global Palestinian consciousness

Why the West hesitates to condemn racism

Meet the powerful rabbi who once called for killing innocent Palestinians