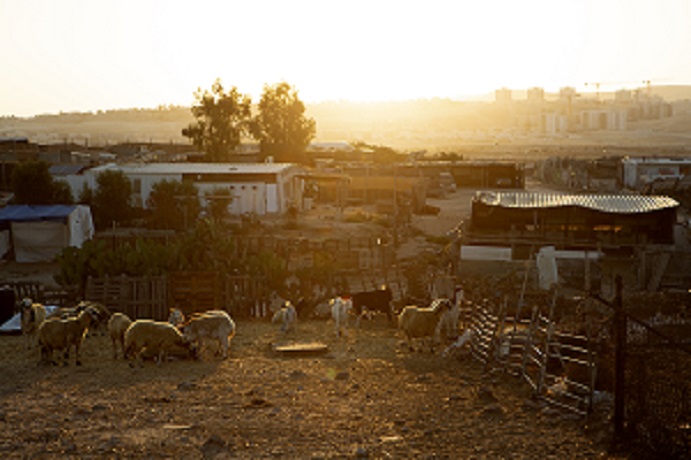 A video shared by a famous Israeli children’s entertainer and his family handing Bedouin children food through their car window in the Negev region has caused uproar within Israel’s Palestinian community, who have denounced the incident as reflecting broader political and social dehumanisation of Bedouins in Israel.

A five-year-old video taken by Oz during a trip with his family emerged on the social platform TikTok over the weekend. In the video, the Israeli entertainer and his family are in their car in the Negev and Oz is heard asking his three children: “Who wants to feed a Bedouin?”

The car then stops near two Palestinian Bedouin children and the car window opens. Oz holds up a cookie to the camera lens and hands one to the young Bedouin.

Yousef Jabareen, an MP, head of the children’s rights committee in Israel’s Knesset and a Palestinian citizen of Israel, requested an urgent meeting on Monday in order to discuss “the racist incident”.

“The video must stay in our minds. It reflects the severity of their cruelty, as they express racial superiority,” Jabareen told Middle East Eye. “It’s an insult to childhood.”

For lawyer and activist Jihad Abu Raya, the video is reflective of the treatment of the Palestinian community in the Negev.

“This case reflects a bigger issue. The Israeli government doesn’t consider Bedouin children as human beings,” he told MEE. “They are not recognised, their villages are not recognised, they don’t have basic services. For more than 70 years, the state doesn’t see them, they can demolish their homes any time. They are invisible.”

For Abu Raya, Oz’s attitude reflected “a microcosm of the state policy”.

Since the video emerged, Abu Raya has initiated a legal campaign to prosecute Oz on the basis of violating privacy law and inciting racism.

Oz apologised for his video over the weekend.

“I would like to express my deep regret for the comments. They were wrong. I do not educate my children in such a manner and no child should be educated in such a manner,” Oz said.

But the head of Rahat municipality in the Negev, Fayez Abu Suhayban, said that his apology was not accepted.

“He treated our children as if they were monkeys,” Abu Suhayban said.

Atia al-Asem, head of the Regional Council of Unrecognised Villages in the Negev, also said that the video showed Bedouin children treated like “monkeys”, describing the footage as “shocking”.

Around 240,000 Palestinian citizens of Israel live in the Negev region. Some 76,000 of them – Palestinian Bedouins – live in villages unrecognised by the state of Israel.

Israel has repeatedly attempted to move Bedouins into “recognised” communities, repeatedly arguing that those in unrecognised areas have no claim to the land.

Last month, hundreds of Palestinian citizens of Israel in the Negev protested to denounce the Israeli government’s policy of house demolitions and evacuation orders in the village of Khirbet al-Watan.

The other villages threatened by the plan are al-Buqaya, al-Bat al-Gharbi, Oum Badoun and Ras al-Jarba, all of which are among the more than 45 Bedouin villages in the Negev unrecognised by the state of Israel.

Rawia Abu Rabia, a human rights lawyer and a legal scholar from the Negev, told MEE that watching the video was “very difficult for me, also as a mother”.

“Let’s be clear: this video reflects the racism in the Israeli mentality and also its incitement,” she said. “Children in Bedouin villages are paying a high price; their childhoods were taken away from them; their homes are being demolished all the time; and on top of that, they are treated as if they are in the zoo.

“It reminds us of the colonialist white man; he comes to the natives and treats them with a sense of superiority,” Abu Rabia said.

“If it was the opposite, an Arab treating Jewish children this way, I believe it would cause an earthquake in the country.”

Right of return: Nakba is back on Palestinian agenda

Shireen Abu Akleh in her own words

May, a month of tragedies for Palestinians

In the firing zone: evictions begin in West Bank villages after...

Palestinian identity and Israel’s long attempt to suppress it