Home nieuws Detention of BDS coordinator in Israel is a “violation,” EU says

The European Union has broken its silence about Israel’s arbitrary detention of the general coordinator of the BDS – boycott, divestment and sanctions – movement.

Mahmoud Nawajaa was seized from his home near Ramallah in the occupied West Bank during a night raid by Israeli soldiers on 30 July.

“We are following this case very closely through our channels and contacts on the ground,” the EU said in a statement emailed to The Electronic Intifada on Friday.

“The reasons for the arrest and the charges brought against Mr. Nawajaa are not yet known,” the EU added. It acknowledged that “no formal charges have been issued and he continues to be prevented from seeing his lawyer.”

“According to our information, he was transferred from the West Bank to a detention facility in Israel,” the EU said.

“Transferring a prisoner to detention facilities outside the occupied Palestinian territories is a violation of article 76 of the Fourth Geneva Convention.”

“Detainees are also entitled to formally receive charges against them, should be given access to legal aid, and tried within a reasonable time or released,” the EU added.

On 2 August, at the request of Israel’s Shin Bet secret police, an Israeli military court extended Nawajaa’s detention for 15 days, and he has another hearing scheduled for Sunday.

The EU has pointedly not condemned the arrest of a prominent human rights defender outright, nor demanded Nawajaa’s immediate release. 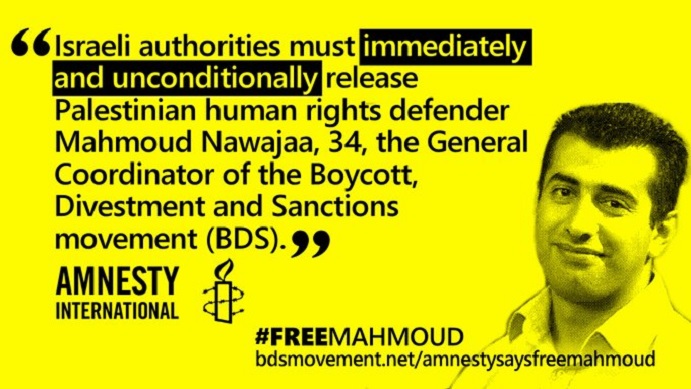 This is in marked contrast to Amnesty International, which demanded on Friday that Israel “immediately and unconditionally release Palestinian human rights defender Mahmoud Nawajaa.”

“He has been detained solely for exercising his rights to freedom of expression and association and is therefore a prisoner of conscience,” Amnesty added.

On Thursday, the Palestinian Human Rights Organizations Council called “on the international community to effectively intervene for the immediate release of Nawajaa.”

It added that under the UN Declaration on Human Rights Defenders, Nawajaa “enjoys protection on grounds of his BDS activity and opposition to racial discrimination policies implemented by the Israeli colonial state against Palestinian citizens.”

“Concerns” but no consequences

The EU told The Electronic Intifada it has been “regularly addressing the issue of Palestinian prisoners with Israel.”

It said it has “called on Israel to fully respect international humanitarian law as well as its human rights obligations and international standards towards all prisoners, also in light of the Fourth Geneva Convention.”

The statement also asserts that the EU “regularly expresses a long-standing concern about Israel’s extensive use of administrative detention without formal charge.”

While the EU acknowledges how extensive Israel’s human rights abuses are, the 27-nation bloc’s “long-standing concerns” have been accompanied by no actions to hold Israel accountable.

On the contrary, the EU continues to increase its support for Israel despite such abuses, including Israel’s plans to illegally annex more occupied Palestinian land.

Ali Abunimah is co-founder of The Electronic Intifada and author of The Battle for Justice in Palestine, now out from Haymarket Books

Ahead of Italian elections, Israel is untouchable

PA arrests resistance fighters in Nablus, many injured and one man...

Poll: 74% of Palestinians do not want Abbas as president

Palestinian family made to ‘pay the price’ in Israel’s illegal collective...

Forced to relive the past five wars