Home nieuws Britain should end, not extend, its military cooperation with Israel 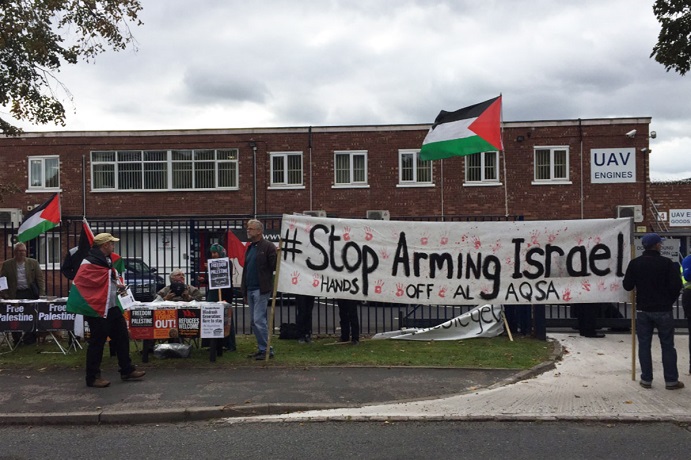 Earlier this month, Israeli and British military officials signed a joint agreement to formalise and increase their “defence relationship”. The full terms of the pact are secret, but it seems that it will involve joint training exercises and other forms of military cooperation.

The agreement came only one month after senior Israeli officers met with their French counterparts to discuss similar arrangements. As my colleague at The Electronic Intifada, David Cronin, pointed out, there is more than a century of precedents for such British and French meddling in Palestine.

In 1916, for example, the two imperialist powers signed a secret document known as the Sykes-Picot Agreement. Between them, they divided up swathes of the Arab world into British and French “spheres of influence”.

As a classic imperialist carve-up, Sykes-Picot received the assent of Tsarist Russia. However, when the Bolsheviks came to power in the 1917 Revolution, Lenin and his comrades published and exposed the agreement, which was deeply embarrassing for the British.

Cronin notes that Sykes-Picot “was followed the next year by pledges of support from Paris and London to support Zionist colonisation in Palestine. France was first to do so, although Britain’s pledge – the Balfour Declaration – had greater consequences.”

Britain agreed in 1917 – in Balfour’s infamous letter – to essentially hand Palestine over to the European Zionist movement for its colonisation project. The indigenous Palestinian Arabs were not consulted.

Throughout 1917 and 1918, the British fought a war in Palestine against the Ottoman Empire. This ended with the latter’s defeat and Britain’s military occupation of Palestine.

Today, direct French and British imperialism is no more. We are now in the era of neo-colonialism.

Despite the decline of the British Empire, the UK still has a military presence across the globe. Journalist Phil Miller revealed for Declassified UK recently that Britain has 145 military bases in 42 countries around the world. America’s overwhelming military superiority makes it the sole global empire today, with hundreds of military bases. As key US allies, France and Britain bow down to the global hegemon.

The Middle East remains an important area of the globe in geo-political terms, according to the calculations of imperial planners in Washington, London and Paris. Israel has long sold itself as a useful tool of Euro-American control in the region; a “little loyal Jewish Ulster in a sea of potentially hostile Arabism” in the words of Britain’s first military governor of Palestine. It is a key tactic of imperialist control in the modern era to use such regional clients.

There’s no doubt that – from the perspective or the brutal realpolitik that regrettably holds sway among political and military elites in the West – Israel performs useful services in this regard. This is because the “national interests” of these countries are defined so narrowly that they do not mean the actual interests of the nation as a whole – of the people – but those of private corporations, of capital and of the managerial elites of state power.

A recent example of Israeli services to British elite interests was the announcement a few months ago that British police had tested an Elbit drone off the Welsh coastline. The announcement made it clear that the police intend to use the military drone for surveillance of the British populace. Elbit is Israel’s largest private arms maker. The same Hermes 900 drone that was tested in Wales has also been used to murder Palestinian civilians in the Gaza Strip indiscriminately for years.

Nevertheless, in my view, such ties are more about Israel forging political rather than military links with its Western allies. After all, there is nothing particularly unique about the Hermes 900 or Elbit’s other products that Britain needs to use them above the products of all other weapons manufacturers in the world.

Moreover, Israel has not been above attacking and spying on its Western “allies”, as in the case of the Israeli spy Jonathan Pollard. A US naval intelligence analyst, Pollard spent almost three decades in a US jail after stealing military secrets and selling them on to Israel.

The Obama administration freed Pollard in 2015. Restrictions preventing him from leaving the US recently came to an end, and reports suggest that he and his wife could move to Israel soon. Israeli Prime Minister Benjamin Netanyahu called Pollard on the phone last month and asked him to move there.

In Britain, Israel has interfered in the British electoral process for years. These covert activities reached their apex a year ago when Jeremy Corbyn – after a five-year sabotage campaign under the mask of “combatting anti-Semitism” – was effectively prevented from winning the General Election and entering 10 Downing Street. As far as the ruling Conservative Party and Britain’s deep state elite were concerned, that was another useful service performed by “the little loyal Jewish Ulster”.

The British people should take note. And then let their government know that it should end, not extend, its military cooperation with Israel.