Home nieuws Australia and Israel are two sides of the colonial legacy which undermines... 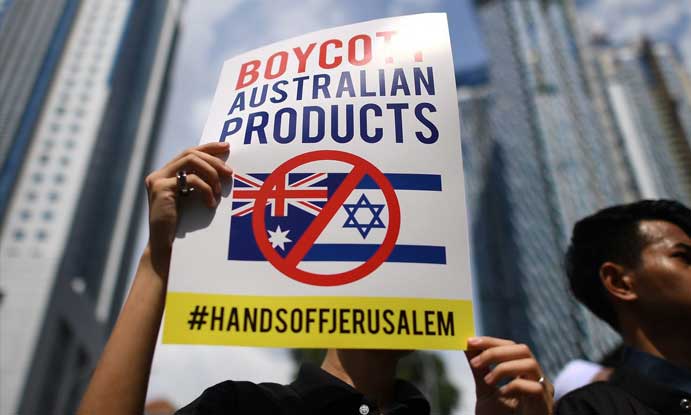 Like other countries prioritising international consensus and diplomatic relations with Israel simultaneously, Australia is trying to square a colonial circle. Whilst not averse to promoting the two-state paradigm and expressing “concern” at the forthcoming annexation, Australia also supports Israel against the International Criminal Court’s possible investigation into war crimes committed by Israeli officials. Much like the US and its “shared values” rhetoric, “Australian values” — let’s call them colonial legacies — are shaping the discourse in Australia regarding overt support for Israel and rhetorical afterthought for Palestine.

Earlier this month, Australian Foreign Minister Marise Payne issued a statement expressing concern over the forthcoming Israeli annexation within the context of the two-state compromise. “The focus needs to be on a return to direct and genuine negotiations between Israel and the Palestinians for a durable and resilient peace agreement, as soon as possible,” Payne declared.

On Wednesday, Sky News host and former political adviser Chris Kenny echoed the two-state rhetoric while stating that UN institutions “spend an inordinate amount of time” seeking to discredit Israel at an international level. Kenny also praised the Australian government for taking a stance against the ICC investigations into Israeli war crimes: “Good on Australia for standing up on the sides of our values there.”

Values, however, are ambiguous whereas rights are not. For sure, the latter have been manipulated by governments and international institutions but, unlike “values”, rights are enshrined within the framework of international law. Moreover, national values are influenced by different factors, including a country’s historical narrative. Australia, which considers itself to be multicultural, has a history of oppressing the indigenous population which influences the current politics of dispossession. Recent news indicates water deprivation among Aboriginal communities in Australia, with researchers pointing out that they are excluded “from accessing water and from participating in the water economy.” This is a “value” which Australia shares with Israel, the latter having prioritised water theft as part of its colonial enterprise and ongoing plunder of Palestine’s natural resources.

With such blatant discrepancies when it comes to values and rights, Australia’s insistence upon the two-state framework must be read within the colonial context and experience. The two-state framework protects colonialism, hence the linking of diplomatic negotiations to Australian values. Likewise, taking a stance against the ICC investigations into war crimes is not about the bureaucratic failings of the court, but rather about ensuring that colonialism is not exposed as the crime that it undoubtedly is.

Australia’s ties with the Zionist colonial enterprise were seen as early as 1947, when it was the first country to vote in favour of the UN Partition Plan. Diplomatic relations with Israel were established in 1949 and the Australian government’s intention to move its embassy to Jerusalem is framed by the two-state compromise: “when practical, in support of, and after the final status determination of, a two-state solution.”

The absence of indigenous rights stands out when considering Australia-Israel relations, a reflection of how Palestinian rights are also trampled upon in the international arena. Rhetoric means nothing if not accompanied by political action, and all that the Palestinians have got out of the UN is mere symbolism. It is, after all, the two-state framework that provides common ground for the non-recognition of Palestinian rights by refusing decolonisation. Australia does indeed share values with Israel; it too is a political embarrassment which pushes a colonial agenda in Palestine.

Ramona Wadi is an independent researcher, freelance journalist, book reviewer and blogger; her writing covers a range of themes in relation to Palestine, Chile and Latin America