Home nieuws Why is the world unable to see Gaza’s true potential ? 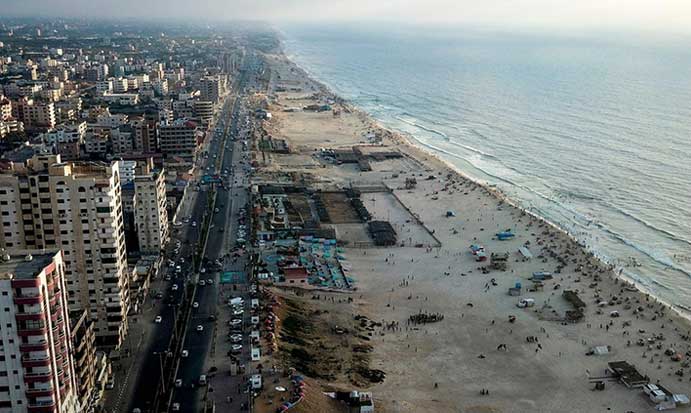 Living under permanent siege, Gazans have had to innovate to survive – yet their suffering has no end in sight.

Last July, I was in Gaza. The heat was unbearable, as it usually is at this time of the year. It only adds to the general misery stemming from power cuts, a lack of clean water and sanitation and, of course, the now 13-year Israeli blockade. The unemployment rate among youth – many of whom would normally graduate from university during this time – stands at nearly 70 per cent.

Throw into the mix the coronavirus pandemic and the looming annexation of 30 per cent of the West Bank, as threatened by Israeli Prime Minister Benjamin Netanyahu, and things begin to look dire. There is a feeling of claustrophobia and of never being able to leave, added to the hopelessness of the 1.9 million people living in the 40-kilometre strip.

It is little wonder then that psychologists and economists in Gaza are deeply concerned about the rising suicide rates, especially among the young.

I been travelling to the Gaza Strip since the end of the first intifada – the Palestinian uprising – in the early 1990s. Every time I have made my way past the Erez border crossing, I have had a sense of being locked in, despite holding a passport that gives me the option to leave whenever I want. For Gazans, who are seldom able to cross the barrier to find work or even to meet relatives and friends in the West Bank or Jerusalem, the feeling is permanent.

Imagine being thwarted at every level, undergoing three miserable wars and being caught in the crosshairs of the political feud between Hamas, the organisation that controls Gaza, and the Palestinian Authority, which runs the West Bank in Ramallah.

I have never found so much resilience in one place as I have in Gaza, especially among its youth. One project I encountered there last year was a tech hub called Gaza Sky Geeks, which hosts a coding academy. The people working there have come to speak perfect English, learnt from watching movies and videos.

I wandered around Gaza for several weeks, talking to friends, professors, housewives, fishermen, poets, farmers and priests. I also received an anguished briefing from Matthias Schmale, who heads the Gaza unit of the United Nations Relief and Works Agency for Palestine Refugees.

UNRWA has been destabilised by punishing financial cuts from the US. In his recently published book, John Bolton, the former national security adviser in the Trump administration, reveals how he was proud to cut funding to desperate Palestinians simply to appease pro-Israel lobbyists in Washington. But the politics that play out in the American capital, and in Tel Aviv, Jerusalem and elsewhere, matter little to those living in Gaza’s Beach Camp or Rafah. They are just trying to get through the day.

Every visit to Gaza has left me haunted. On my last, when I met Gaza Sky Geeks, I had a particular train of thought: could the major banks and corporations around the world that require customer service not consider outsourcing their work to ordinary Gazans?

Could Gaza not become the next Bangalore (regarded as the Silicon Valley of India), given its people’s growing technological expertise and linguistic skills? Could companies such as Apple, Google and Twitter not do more to make Gaza liveable, so that youngsters do not take their own lives – as Suleiman al-Ajouri, a man in his 30s, recently did when he shot himself out of frustration over his future?

It annoys me to hear some say that Covid-19 has been a good thing for human beings because it has allowed them to slow down and take stock of their lives. After all, half a million of their fellow human beings have died with Covid-19. There also seems to be little understanding of the conditions in which people like many of those in Gaza continue to live – stuck inside homes so small that they can hardly hold an entire family.

One of the saddest stories I have encountered is that of a friend, whom I will call Mohammed.

Last year, after much struggle and string-pulling, he left Gaza upon winning a fellowship to one of the most prestigious universities in Europe. Months later, however, he was unable to return to see his mother when she was infected by coronavirus. She whispered into the phone asking Mohammed to come home, but he was unable to. Even if the UK, where he lives, had not been in lockdown and he had made his way into Gaza to meet his mother, he would have risked being trapped there again.

Six years after his brother was killed in the Gaza-Israel conflict, Mohammed lost his mother. “I thought I was so happy when I arrived here in the UK to study,” he told me. “And now I realise it is not the fate of a Palestinian to be happy.”

Here in France, as I watch people board trains and planes to go on vacation, I think of a group of young Gazan writers called We Are Not Numbers who tell me that they don’t want to be treated as mere statistics but normal human beings who are born, fall in love, study and have real emotions.

It is difficult for me to imagine a place that evokes as many feelings of desperation and anger as Gaza. Even in Syria, if the war eventually ends, there is cause for some optimism that the country will be rebuilt. Gaza, however, is trapped in limbo, with a long march into the future that can seem like it is devoid of any hope at all.

Janine di Giovanni is a Senior Fellow at Yale Jackson Institute for Global Affairs and the author of the upcoming The Vanishing, about the position of Christians in the Middle East

Palestinian identity and Israel’s long attempt to suppress it

Will Israel be held accountable ? – in conversation with the...

Biden aides welcome Israeli minister – even as he refuses to...

Zionist settlement expansion extends the violence started during the Nakba

[VIDEO] What’s the story ? – Abed Abu-Shehadeh on the Palestinian...

Israeli forces use Palestinian girl as a human shield in Jenin

As we grieved for Shireen Abu Aqleh, Israeli police attacked us...