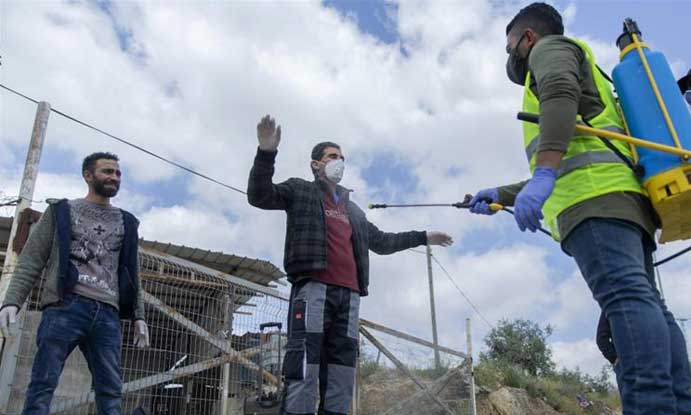 In recent weeks, some countries around the world have managed to slow down the spread of COVID-19 within their borders, and successfully eased their strict lockdown measures. Many others, however, experienced a second wave of infections and are still struggling to reduce the number of new coronavirus cases.

Unfortunately, the occupied Palestinian territories are in the latter group.

After imposing strict measures early on during the first wave of infections, Israel and the occupied Palestinian territories appeared to have contained their outbreaks, with each reporting only a few dozen new cases a day in May. But an easing of restrictions has led to a steady uptick in cases since mid-June. This caused panic and confusion while the authorities rushed to come up with more effective methods to get the virus under control.

However, stemming the spread of the coronavirus is particularly difficult in Palestine due to Israel’s military occupation and the resulting apartheid and economic devastation.

The sharp deterioration in coordination between Israeli and Palestinian officials after Israel threatened to annex large parts of the occupied West Bank has made an already grave situation worse. The Palestinian Authority’s refusal to accept tax revenues from Israel due to its annexation plans meant that the public sector employees did not receive regular salaries since May, putting more strain on the local economy during the lockdown.

The fractured administrative structure of the occupied West Bank – where Area A is exclusively administered by the PA, Area B is administered by both the PA and Israel; and Area C is administered only by Israel – has made it impossible for the Palestinian leadership to impose effective preventive measures. The PA’s inability to fully access Areas B and C, which comprise almost 80 percent of the West Bank, has left it struggling to follow an all-inclusive coronavirus containment strategy.

The recent rise in coronavirus cases in the occupied territories has largely been blamed on the continuation of weddings, funerals and other forms of mass gatherings as well as Palestinian labourers working in Israel. Recognising that it is powerless to officially impose any virus containment measures in areas under Israeli control, the PA has asked grassroots activists, influential families, clan and tribe leaders to help it raise awareness and prevent large gatherings.

The situation in the West Bank city of Hebron, the area hardest hit by the second wave of infections, provides further proof of the occupation’s devastating effect on the PA’s ability to contain the virus. The 1997 Hebron Protocol signed between Israel and the PA divided the city into two areas: H1 and H2. The H1 is controlled by the PA, but H2 is under Israeli military control.

During the first wave of infections, the PA imposed a strict lockdown in H1, however, Israeli authorities did not follow the same strategy in H2. Thus, while some shops and venues were forcefully shut down, others, sometimes located on the opposite side of the same street, were allowed to continue with business as usual. This caused a lot of confusion and frustration for the residents of the city and exacerbated the spread of the virus.

Furthermore, on July 21, at a time when the Palestinian Ministry of Health recorded daily increases averaging 400 cases across the West Bank and occupied East Jerusalem, with 80 percent of active cases being recorded in Hebron, the Israeli authorities demolished a COVID-19 quarantine and testing centre in the city. Another testing centre in the Jerusalem neighbourhood of Silwan was raided and shut down by the authorities in mid-April.

And as the Palestinian population was put under another strict lockdown in July, Israeli forces continued to conduct nightly raids on Palestinian areas, disregarding the severity of the crisis. Ramallah, Jenin, Bethlehem and other Palestinian cities were raided multiple times throughout the month, with scores of Palestinian being arbitrarily arrested.

On July 18, Israeli forces also conducted a night raid on the Al-Jalazon refugee camp, where more than 150 COVID-19 cases have been recorded and approximately 14,000 people are forced to live in close quarters with little possibility of social distancing. The camp’s youth and volunteers have been working hard to control the spread of the virus within the camp, but the Israeli raid and the resulting clashes and arrests brought their efforts to a halt.

Palestinians in East Jerusalem have also been left vulnerable to the virus due to the activities and policies of Israeli authorities. In a July briefing paper, Medical Aid for Palestinians, Al-Haq and the Jerusalem Legal Aid and Human Rights Centre highlighted how “Israel’s discriminatory response to COVID-19 in East Jerusalem, coupled with long-standing failures to fulfil fundamental human rights, has compounded Palestinians’ susceptibility to the pandemic”.

In their joint briefing paper, the NGOs explained how Israeli policies led to “long delays in opening testing centres for Palestinians in East Jerusalem, delays in the provision of quarantine facilities, harassment, arrests, and persecution of local volunteers distributing aid materials and foodstuffs, closures of community-led initiatives to contain COVID-19 and raise awareness as to the pandemic, and the initial failure even to provide data on the numbers and rate of infections in Palestinian communities as well as to issue information and guidance for the Arabic-speaking public”.

Most of the fears Palestinians had when the pandemic began in March were realised over the past few weeks. The virus had spread, uncontrolled, in heavily populated cities and towns. It had also hit vulnerable and overcrowded refugee camps all over the West Bank, where social distancing is not possible.

Palestinians in the occupied territories are aware that their capabilities in the health sector are pale in comparison with those of more developed nations who had been devastated by the pandemic. This is why they fear the worst could be still to come. They are angry with the PA for failing to protect them from this deadly virus, but they are also aware that the Israeli occupation is making it almost impossible for the Palestinian leaders to manage the situation.

Jalal Abukhater, a Jerusalemite, holds an MA in International Relations and Politics from the University of Dundee

Palestinians reject international impositions on themselves and their land

Is this the end of UNRWA ?

Israel is losing the misinformation war

Dems in Congress are afraid to speak up for Israel because...

Unilever sells off Ben & Jerry’s in Israel to avoid West...

Amid outrage over journalist’s killing, US vows to put Israel first

[the only democracy …] IDF censorship hits an 11-year low

The courts won’t kill the BDS movement against Israel

The world continues to turn a blind eye to Palestinian victims...

Killing of journalist in the occupied Palestinian territory

Calling Israeli apartheid what it is