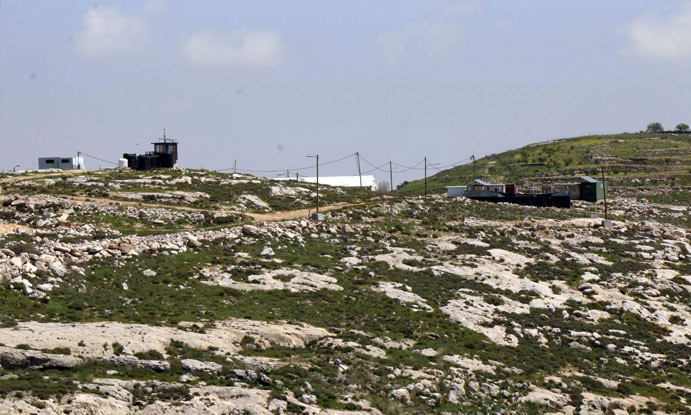 Over the past week, there have been at least three incidents of illegal Israeli settlers razing Palestinian lands.

Israeli settlers are exploiting a lockdown, imposed in the occupied West Bank to slow down the spread of the coronavirus pandemic, to annex Palestinian land and launch attacks against Palestinian civilians and their homes.

Over the past week, there have been at least three incidents of residents of illegal Israeli settlements razing Palestinian lands and paving roads in the districts of Nablus, Jerusalem and Bethlehem.

There has also been a spike in attacks against Palestinians and their properties, with Middle East Eye documenting abuses in the villages of Madama, Burqa and Burin.

“We experience attacks from the settlers a few times a month,” Ghassan al-Najjar, a 30-year-old activist in Burin, a village 5km south of Nablus, told MEE.

“But ever since we were put under lockdown because of the coronavirus, it has increased tenfold,” he said, adding that settlers, under the protection of Israeli soldiers, have been raiding the village daily.

According to Najjar, settlers from the Har Brakha settlement have been attempting to seize more land on the outskirts of the village, close to the settlement.

“The settlers know that people are staying in their homes because of the coronavirus, so they are trying to use it as an opportunity to attack us and take more land,” Najjar said.

While settler attacks in the West Bank are a common occurrence, activists from across the occupied territory have reported a spike in attacks since a state of emergency was declared due to the coronavirus pandemic earlier this month.

In the southern West Bank district of Bethlehem, the centre of the coronavirus outbreak in Palestine, activist Mahmoud Zawahreh, 48, told MEE that settlers were enacting similar tactics over the past few days in the rural village of Khallet al-Nahleh.

The Israeli settlers’ attempts to seize a hilltop in Khallet al-Nahleh date back to 2013. Over the years, Zawahreh says, settlers from the nearby mega-settlement of Efrat have tried to re-establish the outpost after it was dismantled by Israeli forces.

“A court ruling proved that the land was privately owned by Palestinians, and the settlers’ tents were dismantled,” Zawahreh said. “They haven’t attempted to come back here in years, until a few days ago.”

In the past few days, the settlers have returned, this time with more tents, water tanks and power generators. On Monday, the settlers began paving a dirt pathway in order to create an easier access route to the outpost.

“The coronavirus crisis is limiting the movement of Palestinians, specifically around Bethlehem, because of the quarantine and curfew imposed by the government,” Zawahreh said. “The settlers know that, and are taking advantage of it.

“They know the people will be too scared to come in large numbers and protest against them, like we did before, so it’s an ideal situation for them to take over the land.”

Settlers ‘using virus to their benefit’

“Because of the settlers and the occupation, we cannot follow the guidelines set by the World Health Organisation or by our own government to protect ourselves against coronavirus,” Najjar told MEE.

“If we stay inside our homes, then we protect ourselves from the virus, but then we end up losing our land,” he continued.

In an effort to defend the village while minimising the exposure of people to one another and to the settlers, Najjar and fellow young men from the village have established a small group in charge of protecting their lands during the coronavirus lockdown.

“Usually the whole village will come out to defend the lands, but now we are working as a small group, and rotating in shifts to minimise potential exposure,” he said. “It’s all we can really do for now.”

In Khallet al-Nahleh, Zawahreh urged the international community to pressure the Israeli government to stop “the crimes of the settlers” in the West Bank.

“It is sad and frustrating for us as Palestinians to see that during this pandemic, humanity is uniting all over the world to defend and protect one another from this virus,” he said. “But the Israeli settlers are doing the opposite. They are using the virus to their benefit, to hurt the humanity of others, and steal the land of others.

“In Palestine, we are stuck between the rock of the occupation, and the hammer of coronavirus.”