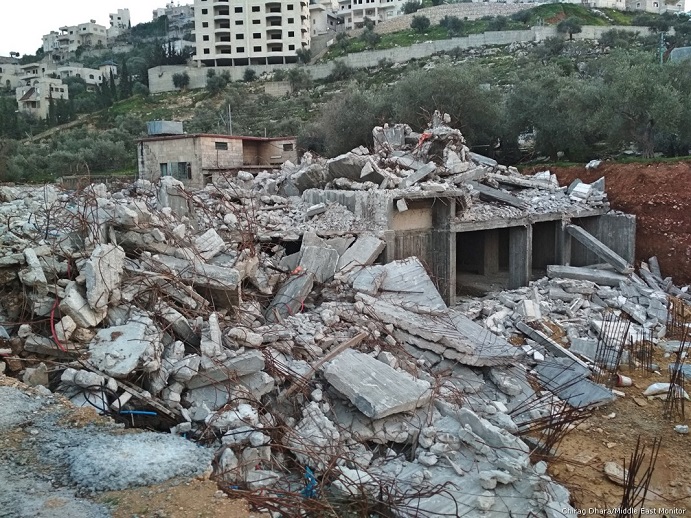 In the early hours of this morning, Israeli forces destroyed the family homes of two Palestinians on trial for the murder of 17-year-old Israeli, Rina Shnerb, in the Ramallah area.

The home of Walid Hanatasheh located in occupied Ramallah, and that of Yasan Mjames in the Birzeit suburb, north of the city, were destroyed by bulldozers.

Palestinian media said that Israeli soldiers stormed apartments near Hanatasheh’s house and “terrorised the residents, especially the children”, then took pictures of the house after the demolition.

Naftali Bennett, the Israeli Defence Minister, informed Shnerb’s family this morning that the demolitions had been completed .

Hanatasheh and Mjames had been notified of the intent to demolish their family’s homes on 10 February but had appealed the decision.

However, the High Court of Justice threw out the appeal, and unanimously approved the demolitions on 20 February.

The panel of three judges, acknowledged that “the harm to relatives and neighbours not involved in the attacks is great, but” added that “a reasonable and limited use of the authority to confiscate and destroy, for deterrent purposes, is necessary”.

The court said that at the appeal hearing, Justice Hanan Melcer had asked family members to condemn the actions of their relatives, which could have swayed the court, but was met with silence.

Shnerb was killed in August 2019 when an improvised explosive device detonated while her family was hiking to the Danny Spring in the West Bank, near the illegal Israeli settlement of Dolev.

The bomb was thought to have been planted ahead of time, and was triggered remotely when the family approached, the Israeli army said in a statement.

Five Palestinians were arrested on suspicion of involvement, with each of them notified of the intention to demolish their home.

Israel does not allow demolished homes to be rebuilt and threatens to destroy any attempts to restore the house.

Home demolitions by the self-declared Jewish state have been internationally condemned as a means of collective punishment in violation of the Geneva Convention.