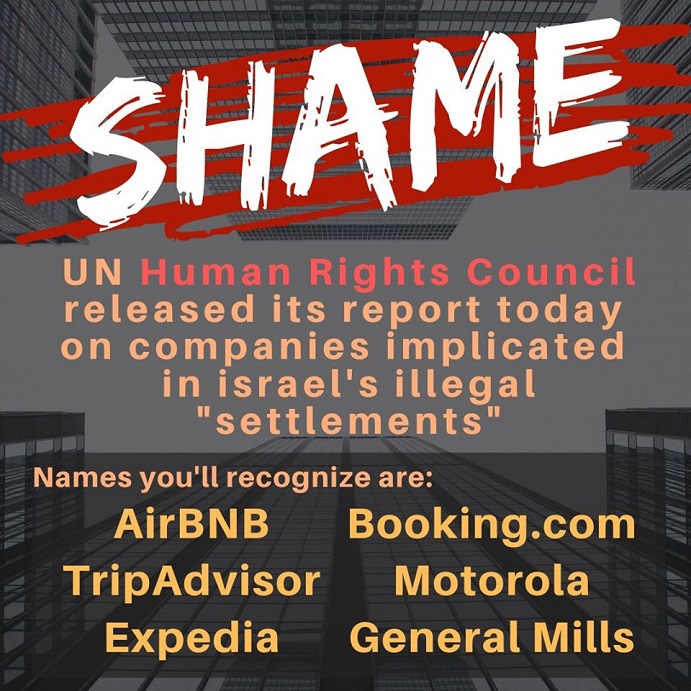 The database, when released, would serve as an important tool to deter business involvement in human rights abuses, grave breaches of international humanitarian law, and internationally recognized crimes, while allowing for increased transparency of businesses profiting from and contributing to Israel’s illegal settlement enterprise.

The UN has recently prioritized the protection of human rights and international legal standards within the context of business activities – just not in regard to Palestine. For instance, in August 2019, the report of the UN Independent International Fact-Finding Mission on Myanmar listed several companies, including foreign companies, linked to Myanmar’s military and ongoing human rights violations. The report stemmed from the UN Guiding Principles on Business and Human Rights and their “Protect, Respect, and Remedy” framework. The UN database of businesses involved with Israeli settlements, which would be updated annually, would help to enforce these UN guidelines in the context of the Israeli occupation.

Political pressure from states, notably Israel and the United States, as well as lobby groups, has likely been the cause for the database’s delay. Some states and actors have pushed back. Twenty-seven UN member states, for example, reiterated during the July 2019 Council session that the High Commissioner and her office must “operate and execute their mandates in an independent manner and without interference.” During the same session, 65 member states requested that the High Commissioner urgently fulfill the database mandate in its entirety.

At the September 2019 Council session, South Africa requested an explanation for the failure of the database’s release, concluding that “it cannot be that the powerful and monied continue to abuse the human rights of Palestinians in the name of profit.” Most recently, in October 2019 Special Rapporteur on the Situation of Human Rights in the Palestinian Territory Occupied since 1967, Michael Lynk, called on the High Commissioner to release the database “in a fully transparent fashion, with all businesses named.”

Meanwhile, parliamentarians, including from Belgium, Chile, the Netherlands, Sweden, and the UK, have called for the database’s release in communications with the High Commissioner and their governments.

If the UN Human Rights Council succumbs to political pressure regarding this mandate, it would likely be a first. Such a failure would imply that human rights are indeed politicized and financialized, and that state and corporate interests override human rights. The decision whether to fulfill the database mandate is an important test for the UN’s supposed universal implementation and enforcement of the international legal framework and human rights standards, while testing the credibility of the Office of the High Commissioner and its bodies.

Al-Shabaka policy member Nada Awad holds a master’s degree in International Relations and International Security from Sciences Pro Paris. She works on human rights violations in the Arab region as the international advocacy officer at the Cairo Institute for Human Rights Studies (CIHRS).

Maha Abdallah is a senior legal researcher and advocacy officer at Al-Haq, focusing on business and human rights and corporate accountability in occupied territory and conflict-affected settings.

The EU prioritizes the Abraham Accords

Lapid is not serious about a Palestinian state

Liz Truss: ‘I am a huge Zionist’

Private militia and remote policing: Israel is ramping up repression of...

Anti-boycott laws are a dystopian nightmare

If Liz Truss does this in Israel, it will have far-reaching...

Israel to impose closure on Gaza crossing for Jewish holiday

PA is negotiating with resistance fighters in Nablus to ‘sell their...

EU-Israel talks restart after decade amid outcry from rights groups

The targeted killing of Palestinians is the next Israeli crime to...

Palestinians ‘killed in cold blood’ by Israeli army near Ramallah