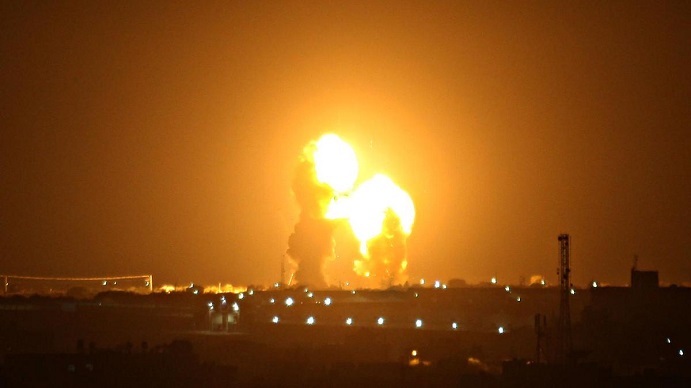 The November 14 air strike targeted the home of Rasmi Abu Malhous, a commander in Islamic Jihad.

A ball of fire is seen after an Israeli air strike in Khan Younis in the southern Gaza Strip early on November 15, 2019. AFP

The Israeli army said on Tuesday that a strike in Gaza that killed nine members of the same family happened because of a faulty assessment of the risk to civilians.

The November 14 air strike targeted the home of Rasmi Abu Malhous, described by Israel as a commander in Islamic Jihad, the militant Palestinian movement against which Israel had launched a three-day campaign.

He and eight members of his family were killed by the attack, including five children.

A statement from the army said that intelligence collected ahead of the attack had indicated that the residence “was designated as an Islamic Jihad terror organisation military compound”.

The army had “estimated” that “civilians would not be harmed as a result of an attack” on the site, which was not believed to be accessible to members of the public.

An army inquiry later found “that even though military activity was conducted in the compound, it was not a closed compound, and in reality civilians were present there,” it said.

The army said it would learn from its “mistakes” to reduce “the recurrence of similar irregular events”.

It stressed it had made “considerable efforts… to reduce the damage to non-combatants”.

The military report also blamed Islamic Jihad for exploiting and endangering non-combatants “by placing its military assets in the heart of the civilian population and by deliberately acting from within densely populated civilian areas”.

The three-day flare-up began when Israel killed a senior Islamic Jihad official in Gaza on November 12.

The group, which is closely allied with Gaza’s rulers Hamas, responded by firing more than 450 rockets at Israel.

During the confrontation, Israeli forces attacked dozens of targets in the enclave.

Palestinian officials said 35 Palestinians were killed and more than 100 wounded. There were no Israeli fatalities.

In its Tuesday report, the Israeli army said its November operation had been a success, dealing a blow to Islamic Jihad and serving to increase the security of Israeli civilians and help prevent “a wider military campaign”.

The incident has raised new questions about Israeli tactics in Gaza.

Since the Hamas militant group seized control of Gaza, Israel has fought three wars and numerous skirmishes against armed groups in the territory.

Hundreds of Palestinian civilians have been killed by Israeli fire over the years, drawing heavy criticism of Israeli battlefield practices and accusations from Palestinian and international human rights groups of war crimes.

Last week, the chief prosecutor at the International Criminal Court in the Hague said she had found sufficient evidence to open a formal war crimes investigation into Israeli battlefield practices during a 2014 war in Gaza, pending a ruling by the court on territorial jurisdiction.

Fatou Bensouda also said there was evidence that Hamas and other militant groups have intentionally targeted Israeli civilians and used Gaza’s own civilian population as human shields.

Israel has rejected Bensouda’s findings and says the court has no jurisdiction, in part because it says the military is capable of investigating itself. But human rights groups have accused the army of “whitewashing” wrongdoing by its forces.

Hamdan Al Sawarka, part of the Abu Malhous family, said the family hopes to sue the army in Israeli courts. He also called on the internationally recognised Palestinian Authority to pursue the case with the International Criminal Court.

“We will fight with the utmost strength,” he said. “The Israelis have the best technology in the world. How can they claim in the 21st century that they don’t know about civilian presence?”