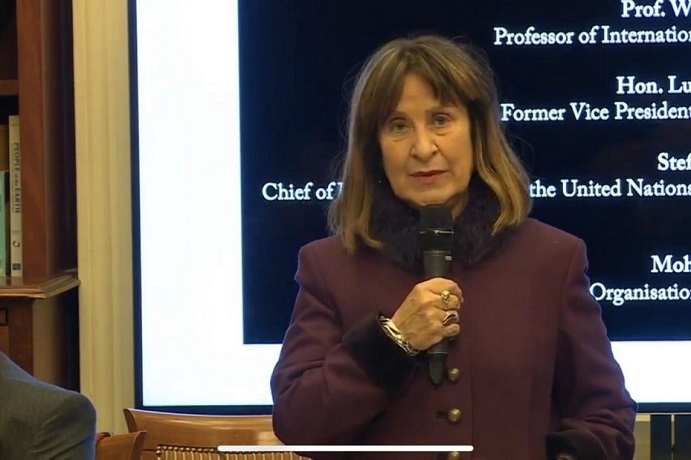 International lawmakers and experts yesterday called out ICC Prosecutor Fatou Bensouda for failing to commence an investigation into Israeli crimes against Palestinian civilians.

International lawmakers and experts yesterday called out ICC Prosecutor Fatou Bensouda for failing to commence an investigation into Israeli crimes against Palestinian civilians.

During an event entitled “Time for the ICC to Act for Justice in Palestine” at the British Academy in London, speakers highlighted that despite ten years of preliminary examinations and overwhelming evidence, including Israel’s use of deadly force against the protesters along the Israel-Gaza fence, Besouda has been stalling to pursue accountability and refuses to indict Israel.

Israeli soldiers have used non-lethal and lethal means against participants in peaceful demonstrations, resulting in the killing and wounding of tens of thousands of Palestinians including children.

Journalists and medical workers have been among those killed and injured. Damage was also reportedly caused to a number of ambulances deployed during the protests.

A letter criticising the court’s case selection policies, after the ICC decided, for the third time, that it will not open an investigation into crimes committed by Israeli commandos against the humanitarian Mavi Marmara flotilla, was sent to Bensouda urging her to waste no further time.

Speaking at the event hosted by the Arab Organisation for Human Rights in the UK (AOHR) Baroness Helena Kennedy, member of the House of Lords, called on Bensouda to take that step before her term ends as ICC general prosecutor.

“Attacks against civilians by military or security forces – wherever in the world they are alleged to have occurred – should be the subject of investigation by the ICC Prosecutor. The Prosecutor’s office has received dossiers of evidence and reports dating back 5 years concerning the Palestinian population.”

“I urge the Prosecutor to act without further delay if we wish to retain confidence in international law and the global legal system. This is in the interests of justice.”

Another case amongst the evidence is a recent UN report carried out by an independent commission published in February, related to the “Great March of Return” protests in Gaza between March-December 2018.

The report found that Israeli security forces shot and wounded 6,016 protestors with live ammunition in the period investigated. Some 189 died at the protest sites, 183 of these from live fire.

It also revealed that, “there was no justification for Israel’s security forces killing and injuring persons who pose no imminent threat of death or serious injury to those around them, including journalists, health workers and children.”

The report also recommended that the ICC should investigate the findings, yet no such investigation has been opened to date.

The evidence sat on for over ten years by ICC State parties also clearly shows that Israel’s settlement enterprise constitutes apartheid and has resulted in the forcible displacement and transfer of thousands of Palestinians from their homes, meaning that it “has committed crimes against humanity”.

“Every day that an investigation is delayed is a day in which there is no deterrence for the commission of further crimes and no accountability. The systematic crimes against Palestinian civilians have been met with silence for far too long, but the ICC has an opportunity to set the record straight now and must not fail in this historic task,” said Director of AOHR Mohamed Jamil.

All victims have a universal legitimate right to an effective judicial remedy, and the equal protection of the law.

The ICC was set up as a court of last resort intended to prosecute senior leaders allegedly responsible for grave crimes, including genocide, war crimes and crimes against humanity when national courts prove unable or unwilling to take on such cases.