Home nieuws Israeli soldiers detain 13-year-old Palestinian in Hebron and lead him up and...

On 3 November 2019, at about 11:30 A.M., soldiers detained ‘Abd a-Razeq Idris, 13, from the Abu Jales neighbourhood. They put him and a jeep, blindfolded him and drove him around. They then took him to al-Harika neighbourhood, about a kilometer from his home, where they took him out of the jeep and walked him, blindfolded, through the streets. When his father arrived, the soldiers refused to turn the boy over. Instead, they drove him to a military post in the settlement of Kiryat Arba yet told the father they were taking him to the police station there, where the father searched for his son in vain. ‘Abd a-Razeq was asked about stone-throwers and sent home alone at about 2:00 P.M.

This case is no aberration, it is part of the routine violence imposed on Palestinians in Hebron by Israeli security forces and settlers, including physical attacks, threats, verbal abuse, soldiers’ incursions into homes (usually at night) – and the false arrest of minors and adults. Israel cites security to justify this conduct and the segregation it imposes on the city. Yet as this case proves, these claims are baseless and serve merely to bolster a policy of driving Palestinians to leave Hebron by making daily life unbearable.

In a testimony taken by B’Tselem field researcher Manal al-Ja’abri on 17 November 2019, ‘Abd a-Razeq Idris described what he went through: 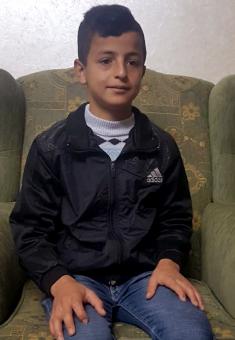 On Sunday, 3 November 2019, at about ten o’clock in the morning, they closed my school and sent us all home after soldiers threw gas cannisters in and around the schoolyard. My house is about three kilometers from the school, and I walked home with a friend.

When I reached the entrance to Jabal Johar, two soldiers jumped on me and started to drag me toward an Israeli jeep. One of them picked me up and put me in the jeep, and then he blindfolded me. I was really scared and didn’t understand what was going on. I sat in the jeep and didn’t say a word. One of the soldiers slapped and kicked me. He spoke to me in Hebrew so I couldn’t understand what he was saying.

The jeep started moving but I couldn’t see where we were going because of the blindfold. Eventually it stopped. The soldiers took me out and led me along the street. I was still blindfolded. While we were walking, one of the soldiers took the blindfold off me and I saw that I was on al-Harika Street. Then a soldier blindfolded me again, tightening it painfully. I didn’t say anything because I was afraid that if I asked the soldier to take it off, he would hit me. I was really scared when the soldiers started firing gas cannisters and shouting at people in the street. My nose and mouth burned. This was just when they led me around the corner. The soldier who was holding me pushed my head down every time I tried to raise it. My neck hurt a lot and I tried to lift my head, but he pushed it down hard. I heard the soldiers talking to a man and a woman who were probably trying to get them to let me go. Then I heard my father’s voice – I guess he just arrived. He also tried to get me away from the soldiers.

Then the soldiers took me inside the army base in Kiryat Arba. They took me into a room on the base. I was still blindfolded but I could tell that there were soldiers there. One of them swore at me, saying “You son of a bitch”. He spoke to me in Arabic and accused me of throwing stones. I denied it and told him that I hadn’t done anything. He asked me about children who were throwing stones, and I told him that I don’t know any of them, and that I was going home and didn’t do anything.

Then the soldier took my blindfold off, took me out of the base and told me to go away. I walked along al-Harika Street until I got to the road leading to the Jabal Johar neighbourhood. I bumped into a relative of mine who told me that my dad was coming to get me, so I waited until he arrived in his car and took me home. My mom was really worried, and when I got home, she and my grandma hugged me and cried. I didn’t do anything, and I didn’t throw any stones. I have no idea what the soldiers wanted from me.

Sadeq Idris, 46, married and father of 11, described what happened to his son in a testimony taken by B’Tselem field researcher Manal al-Ja’abri on 12 November 2019:

On Monday, 3 November 2019, at about eleven o’clock in the morning, I was at home when a relative called me and told me that soldiers had arrested ‘Abd a-Razeq in the Jabal Johar neighbourhood, put him in a jeep and taken him in the direction of the al-Harika neighbourhood.

I drove to al-Harika right away, and when I got there I saw about five soldiers at the top of the road leading to Jabal Johar. They were leading ‘Abd a-Razeq, who was blindfolded. One of the soldiers was holding his hands behind his back, and from time to time pushed his head down. They lead him through the streets of the neighbourhood, throwing stun and tear gas cannisters.

I saw a woman and a young guy talking to the soldiers and trying to get them to let him go. I parked my car close to them and got out to speak to the soldiers. I explained that he was my son, and one of them said, “Your son is a stone-thrower.” He showed me a photo of a boy on his cell phone. The photo wasn’t clear and I don’t know whether it was my son. I replied that even if the photo was of my son, he was still a child and shouldn’t be treated like that. ‘Abd a-Razeq looked pale and scared, and I think he’d inhaled tear gas. One of the soldiers said that he wasn’t going to let him go, and that they were going to take him to the police for interrogation. I kept following them. As they walked along, they went on throwing tear gas and stun grenades. Eventually I turned back. I saw the soldiers take ‘Abd a-Razeq toward the military base to the south of Kiryat Arba, about 200 meters from the gate to Kiryat Arba. I went back to my car and drove toward the base along the Wadi a-Nasara road. I parked my car by the gate near the Jaber neighbourhood. Then I walked down to the road leading to Kiryat Arba. I stopped an army jeep that was driving past and asked the officer about my son. He suggested that I go to the police station in Kiryat Arba, and I did. When I got there, I tried to talk to the police officers inside the station using the telephone at the entrance. I asked about my son, but only after I’d waited for about an hour, an officer told me my son hadn’t been there.

At about half past one, one of my cousins called me and told me that the soldiers had released ‘Abd a-Razeq from the army base near Kiryat Arba. I went there and found ‘Abd a-Razeq waiting for me by the road. They let him go without bail. He was scared, confused, and exhausted. I comforted him and took him home. On the way he told me how the soldiers had grabbed him while he was on his way home from school.