Home nieuws What could a Bernie Sanders victory mean for Palestine? 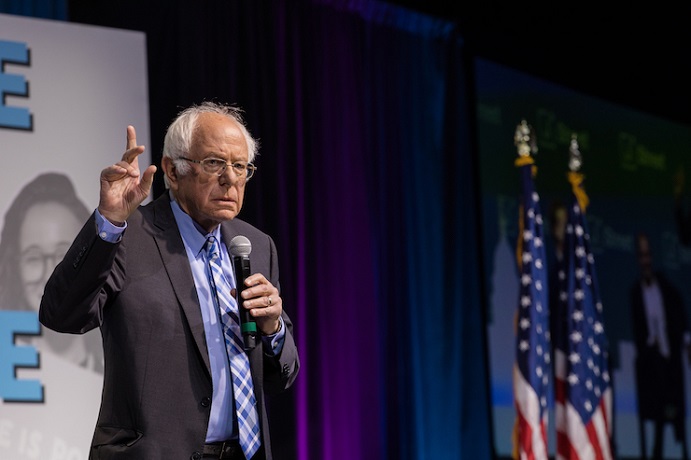 During Wednesday’s Democratic presidential primary debate, Senator Bernie Sanders spoke sympathetically about Palestinians without any prompt from the moderators.

Responding to a question on foreign policy, Sanders first laid out how rather than siding with the “brutal dictatorship” in Riyadh, he would bring Saudi Arabia and Iran together.

“The same thing goes with Israel and the Palestinians,” he added.

“It is no longer good enough for us simply to be pro-Israel. I am pro-Israel, but we must treat the Palestinian people as well with the respect and dignity that they deserve.”

“What is going on in Gaza right now – where youth unemployment is 70 or 80 percent – is unsustainable,” Sanders said.

“We need to be rethinking who our allies are around the world, work with the United Nations, not continue to support brutal dictatorships.”

Initially, I was less than overwhelmed by Sanders’ statement.

We’ve heard him talk about Palestinians before and like his statement during this debate his words are usually couched in an affirmation that he is “pro-Israel.”

It’s troubling that anyone would describe themselves as “pro-Israel,” especially as Israel proceeds at full speed with annexing occupied territory and openly formalizing its system of apartheid.

But progressive YouTuber Mike Figueredo prompted me to reflect on my reaction.

You can see Sanders’ comments and Figueredo’s analysis in the video above.

Figueredo is clearly enthused about Sanders: “He’s not just a candidate who could potentially transform America, but he could transform the world based on what he said.”

Figueredo says that he has been critical of Sanders for not being bold enough on Palestine, but that the senator’s words Wednesday night “almost made me tear up” because “we are at a time when we have a presidential candidate on the debate stage acknowledging the humanity of Palestinians.”

“Nobody else will say we should respect Palestinians or actually try to get some type of peace deal without kowtowing to Israel,” Figueredo adds.

He points out that Sanders is the only candidate to have condemned the overthrow of Bolivia’s President Evo Morales as a military coup – though Sanders did not mention Bolivia during Wednesday’s debate.

“Bernie Sanders is talking about bringing the world together,” Figueredo says, arguing that President Sanders could transform foreign policy in a way that would begin to dismantle US imperialism.

“He’s getting everyone to think about foreign policy in a different way, in a more humane way, where we’re not just using our hegemony to destroy the world, to destroy the planet,” Figueredo argues.

Figueredo acknowledges that Sanders’ position on Palestine remains less than “perfect” and there is still “opportunity for growth.” That is true and an understatement.

But his overall point is that Sanders is pushing the discourse further than any other candidate, not just on Palestine, but also on the destructive American “war on terror.”

I and other writers for this publication have consistently pointed out Sanders’ shortcomings on the question of Palestine.

It is difficult to forget how in a town hall during Israel’s 2014 attack on Gaza, Sanders angrily shut down constituents who protested the slaughter of Palestinians.

Nor did it inspire much confidence in July when Sanders said he would “probably not” reverse the Trump administration’s decision to move the US embassy to Jerusalem.

But there have been notable developments.

Sanders now regularly talks about the situation of Palestinians in Gaza, even putting out a video last year on the impact of Israel’s brutal siege.

It opens with a declaration that Gaza has become the world’s “largest open-air prison.”

By talking about the situation in Gaza, Sanders is pointing to root causes of violence, rather than resorting to the usual talking points that erase and dehumanize Palestinians while portraying Israel as a blameless victim merely exercising a natural right to “self-defense.”

Sanders is the first major candidate to say he would cut US aid to Israel to curb its abuses and would even send the money to support Palestinians in Gaza instead.

That forced Senator Elizabeth Warren, who is competing with Sanders for the progressive mantle, to make a similar, though less emphatic, statement.

Compare that to former Vice-President Joe Biden, a frontrunner for the Democratic nomination:

My point is not to argue that Sanders’ positions are great, terrible or something in between.

Nor have I suddenly concluded that US electoral politics provide the route to Palestinian liberation, especially in an American system where a permanent imperial state and rapacious war industry control foreign policy.

But I am certain that there cannot be justice for Palestinians or for anyone else as long as the planet is subject to unchecked American violence.

So where can we look for hope if we still have any faith that popular mobilization can get us out of this morass and move the world closer to justice?

If we see Sanders’ comments not as a reflection of how Good or Bad the man is, but as the product of a growing movement pressing for change then there is some reason for hope.

Sanders has his own convictions, and remains unreliable on the question of Palestine, but he is responding to a massive shift in grassroots opinion, especially in the Democratic Party.

Huge numbers of people no longer hew reflexively to pro-Israel positions and they are increasingly supportive of Palestinian rights, including the BDS campaign to achieve them.

It was striking how much applause Sanders received on Wednesday night when he made his statement about respecting Palestinians.

It is easy enough to imagine that if Sanders became president, he would quickly disappoint by reverting to a traditional pro-Israel stance and doing little to alter American policy. Or, even with good intentions there is an excellent chance Sanders would be thwarted by the pro-Israel establishment.

But unlike other candidates, Sanders appears to understand that the systemic resistance from fundamentally corrupt political elites applies to everything he wants to do, especially his signature Medicare for All policy.

He understands that the only way a president could win the fight for single-payer universal healthcare is to have a mass movement behind him challenging a Congress that has been legally bribed by healthcare profiteering capitalists.

Sanders has said that as president he would be “organizer-in-chief,” not governing from the top, but rallying people to pressure Congress to implement his movement’s agenda.

The same is true with respect to Palestine: Sanders can and will only do as much as a mass movement demands and enables.

We should not resign ourselves to accepting that the way things are today is the way they will always be. We live in a moment of unprecedented crisis in the neoliberal order, amid climate collapse and skyrocketing inequality.

Even President Donald Trump has privately acknowledged that a socialist agenda “might not be so easy” to beat in 2020.

That is why the US is moving to topple popular socialist governments with renewed vigor, especially in Latin America.

Be as bold as Trump!

One thing we can thank Trump for is demonstrating that presidents can break with long held consensus.

Trump has been nothing if not bold by giving Israel everything it wants, from formally recognizing Jerusalem as its capital, recognizing Israel’s annexation of Syria’s Golan Heights and this week blessing Israeli settlements on occupied territory as legal.

It is just possible that a new president could be equally bold in the other direction – including cutting aid to Israel – guided by a respect for Palestinian human rights and international law and a revulsion at Israeli occupation, apartheid and racism.

And what possibilities would be unlocked if the United States suddenly stopped blocking every effort to hold Israel accountable at the United Nations or the International Criminal Court?

Even if a President Sanders wanted to renege on all his promises, the change in discourse may be irreversible.

A president who entered the White House pledging to cut US aid to Israel may provide an opening for others in the world to take meaningful action even if the US failed to follow through.

It would also provide an enormous boost to the BDS movement and all efforts to advance Palestinian freedom and equal rights.

Don’t take yes for an answer

Regardless of how one reacts to Sanders’ comments, what is absolutely necessary is to maintain pressure on all politicians. No one deserves unconditional support. Don’t accept their positions as good enough, or make excuses for why they cannot go further right now.

The same is true in Britain, where Jeremy Corbyn – a lifelong supporter of Palestinian rights – has been cowed by a relentless Israel lobby campaign to falsely portray him and his Labour Party as anti-Semitic.

People on the left must learn this key lesson from the success of the right wing: Never take yes for an answer. Always demand more, because that’s the only way to keep pushing the discourse in your direction.

As for Sanders, my own response to his comments on Wednesday is: Thank you for your humane words, especially about the plight of Palestinians in Gaza, but if you’re serious about supporting Palestinian rights, now let’s hear you loudly and clearly endorse BDS.