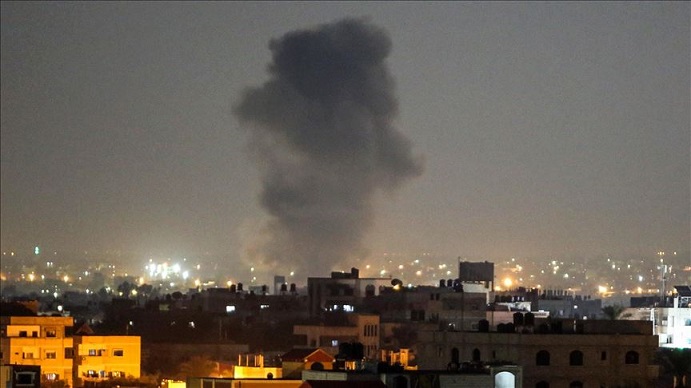 The Israeli army carried out at least 30 airstrikes and artillery attacks Tuesday on several areas of the Gaza Strip, according to the government’s media office in the Strip, reports Anadolu Agency.

“More than 20 Israeli airstrikes and 10 artillery shelling have been marked in different parts of the enclave since early Tuesday,” it said in a statement.

The government said Israel announced the closure of the Beit Hanoun crossing that is intended for individuals, and the Kerem Shalom crossing, for goods, and prevented fishermen from sailing.

In a related development, Israeli Defense Minister Naftali Bennett announced a special state of emergency for 48 hours in areas within an 80 kilometers (650 miles) range surrounding Gaza.

The Israeli army said late Tuesday 190 rockets have been launched from the Gaza Strip toward Israel.

Notably, an Israeli home was hit by a rocket in Sderot in southern Israel. No casualties were reported, according to media outlets.

Two people, including al-Ajouri’s son, were killed and 10 others injured, but the Islamic Jihad leader emerged unhurt.

In retaliation for al-Atta killing, the Quds Brigades, the military wing of Islamic Jihad, launched dozens of rockets towards Israeli cities, to which Israel responded with airstrikes across the Gaza Strip.