Home nieuws P is for Palestine: Fear and loathing at the children’s library 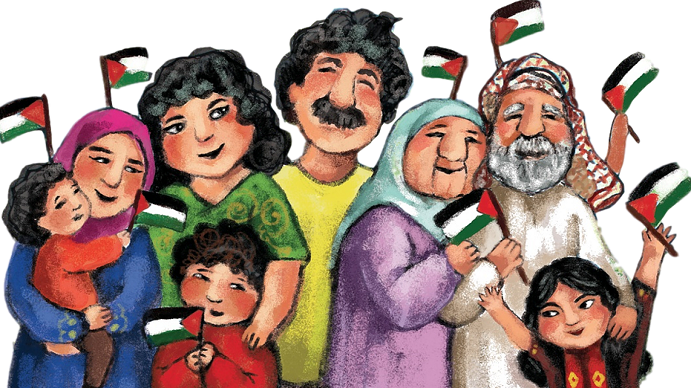 Author Golbarg Bashi says she has faced harassment and intimidation by Zionist groups – all over a children’s book that teaches the alphabet.

As security surrounded the building in New Jersey’s Highland Park, the author – who needed an armed police escort – had to be snuck in through the back door. One of her friends, a member of Jews for Palestinian Right of Return, was by her side throughout the event.

Outside, police were ready for action. The fear was that members of the Jewish Defense League, classified by the FBI as a right-wing terrorist group, would be there to harass library patrons, as they had done two years earlier for another reading of the same book.

Indeed, positioned on either side of the entrance to the library, in the pouring rain, were two camps. Fans stood to one side, carrying a colourful banner reading: “We support our libraries, free speech, and Palestinian rights.”

On the other side, mirroring the white nationalist rallies that are now a sadly familiar sight in parts of the US, foes chanted pro-Trump slogans and hurled insults at the author.

Smeared as a terrorist

“I felt like an African American child being escorted into an unwelcoming white school in the 1960s,” author Golbarg Bashi told MEE.

“The community, the library patrons, did not want me, considered me a threat. During desegregation, whites claimed that blacks were dangerous, that black boys would rape white girls. Today, the fear is of Palestinians – no one should even know of their existence, and my tiny little crowd-fundraised book is viewed as a threat.”

Indeed, since the publication of her children’s book in 2017, Bashi has been smeared as a terrorist and an antisemite, and has received death threats. Zionists also forced an independent bookstore in New York to stop carrying the book, and to issue an apology for having stocked it.

According to that bookstore’s owner, the last time the store faced such threats was decades ago, after Iran issued a fatwa on Salman Rushdie for The Satanic Verses.

To ensure there would be no hostile crowds jam-packing the library room, pre-registration was a requirement, restricted to library card-holding children accompanied by a parent.

The book in question, perceived as a “threat” by Highland Park’s Zionist community members, was P is for Palestine, an alphabet book that teaches about the country with simple, colourful illustrations. “A” is for Arabic, “B” is for Bethlehem, “D” is for Dabke, and the most controversial, “I” is for Intifada.

The reading, which finally took place on 20 October, had been scheduled as an alternative date to an earlier reading in May, which had to be shelved when a firestorm erupted in the Highland Park community over the book, which some view as containing offensive material.

According to the New Jersey Jewish News, “After Bashi’s reading was first announced, the ensuing firestorm attracted the attention of the Zionist Organization of America and the Office for Intellectual Freedom of the American Library Association (AMA). The AMA contacted library officials and said it wasn’t appropriate to cancel an event because of perceived legal or financial implications.

“The library also received a letter signed by the New Jersey ACLU, the New York-based Center for Constitutional Rights, and Palestine Legal informing the library they considered a cancellation unconstitutional, an indication that cancelling the reading could prompt a legal challenge.”

Indeed, it was only after the letters from these civil rights groups were sent that the library acquiesced to rescheduling the reading.

But this may not be the end of the matter: The reading may yet be challenged as a violation of federal anti-discrimination laws (Title VI).

The library has been threatened with legal action because the book is promoted by the US-based Jewish Voice for Peace, a progressive organisation that supports Palestinian rights, and Samidoun, the Palestinian Prisoner Solidarity Network.

A 4 October letter from Marc Greendorfer, a lawyer at Zachor, had warned the library that the anti-BDS legal think tank would take action against the library and the borough of Highland Park for hosting the event.

“Based on the information we have received, two of the primary promoters of the reading, Samidoun and Jewish Voice for Peace, have ties to organizations that are discriminatory and provide support to terror organizations,” the letter stated, suggesting that the reading would violate the anti-discrimination provisions of Title VI and potentially also anti-terrorism legislation, and “should the library proceed with this reading we will file a complaint with the Department of Education”.

As it turns out, according to Bashi, the library director later informed her that all seats had been immediately reserved on the day registration was opened by known Zionists – library-card holders who had earlier opposed the reading. Eventually, only a small handful of children showed up for the 20 October reading, and Bashi said she immediately sensed that the accompanying adults were hostile.

As she broke the ice with the children, joking with them and asking about their favourite subjects in school, the parents grew angry, and ultimately “yanked the children out” of the room, Bashi told MEE.

Still, at the end of her reading, a gracious Bashi offered the library a copy of her book, which the library declined to accept.

“My book is basically banned,” Bashi said, as public libraries do not accept it, while brick-and-mortar bookstores are caving in to Zionist harassment of their staff and management, and also refuse to carry it.

Bashi has also had her share of complications with large online booksellers, where P is for Palestine is listed as out of stock, while her second book, Counting Up The Olive Tree, is not even mentioned.

Fortunately, for those of us who want a copy of either or both books, they are available through the Palestine Online Store – currently the only site stocking these joyful gifts.

Nada Elia is a Diaspora Palestinian writer and political commentator, currently working on her second book, Who You Callin’ “Demographic Threat?” Notes from the Global Intifada. A professor of Gender and Global Studies (retired), and is a member of the Steering Collective of the US Campaign for the Academic and Cultural Boycott of Israel (USACBI)