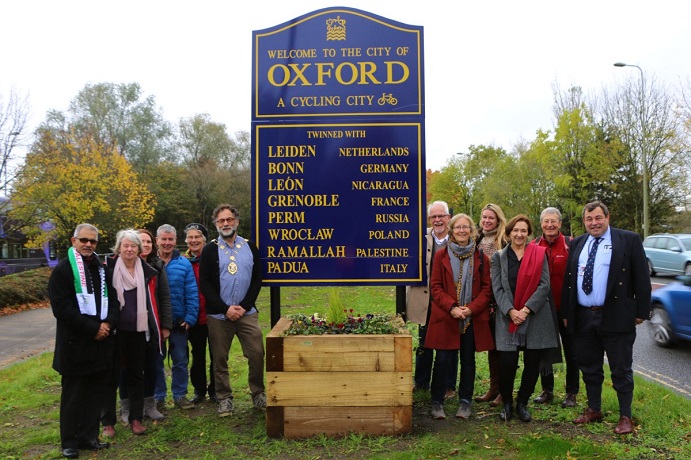 Officially unveiled: Ramallah was officially named Oxford’s seventh twin earlier this year after 16 years of campaigning on The Mayor of Oxford Councillor Colin Cook on Friday attended the unveiling of a new road sign which lists Ramallah as the city’s seventh twinned town.

Members of the Oxford Ramallah Twinning Link attended the event which was led by the charity Oxford-Ramallah Friendship Association (ORFA) and the Oxford City Council. Ramallah was officially named Oxford’s seventh twin earlier this year after 16 years of campaigning.

ORFA works in tandem with Oxford Ramallah Twinning Link and raises awareness through bringing groups and individuals from Palestine to share their stories with residents of Oxford.

City twinning is an act of city diplomacy which aims to give citizens the chance to engage with their respective cultures and foster friendship, understanding and networks.

The signing of the Twinning Agreement between Oxford and Ramallah by Councillor Cook and the Mayor of Ramallah Mousa Hadid took place in March at Oxford Town Hall.

Nikki Marriot, secretary at ORFA, told local television network That’s Oxfordshire: “I think it stops a feeling of isolation and by people coming over here, many young people and older people have met lots of Palestinian people in Oxford, and to be able to talk about their situation and lives, it’s just a very powerful idea, and it’s very powerful for people to be able to share their experiences from both sides.”

“And although that’s the same for all the twinnings, for Ramallah particularly, it’s a difficult place to live.”

The formal move follows a decision in July last year by the Council to initiate a twinning link between Oxford and Ramallah. A memorandum of understanding was signed in December last year.

The occupied West Bank city of Ramallah is a Palestinian city located 16 kilometres north of Jerusalem.

Councillor for Oxford City Council John Tanner said: “I’m thrilled that we got this Ramallah official twin now, it’s been a very strong friendship association for many years so it’s long overdue and we made it official, and I think in a small way, it will build peace and justice in Palestine.”

Oxford’s other twin cities include Germany’s Bonn, the Netherland’s Leiden, Grenoble and Leon in France, Poland’s Wroclaw and Perm in Russia.