Home Nieuws On the other side of Ofer 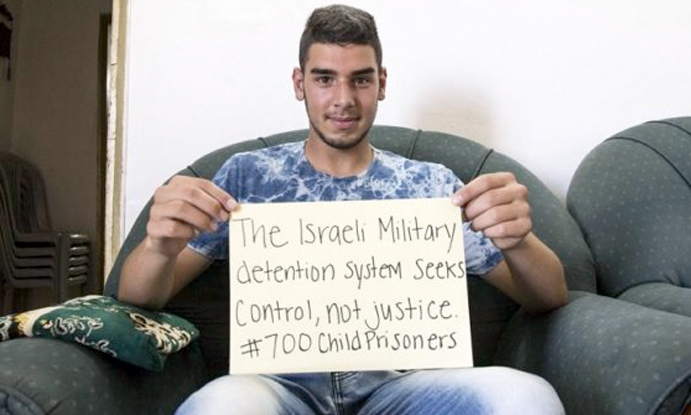 Ofer military court and prison is a series of cages.

I stood a few inches from the steel bars, and felt very small. From sky-high fences topped with barbed wire to the tunnel-like military checkpoint at the entrance, every part of Ofer felt designed to convince those inside that they are less than human. Past the aggressive security checks and strip searches, through the turnstile from the open-air waiting area where people bake in the sun, there is a row of metal trailers serving as courts. One of them, near the end of the row, is reserved for children.

I’m here with Defense for Children International Palestine (DCIP), a nonprofit that provides legal aid to Palestinian children being prosecuted by the Israeli military. My visit is part of GlobalGiving’s Field Program, which provides in-person support to nonprofits around the world.

Ofer straddles the West Bank-Israel border outside Ramallah, a small city 10 miles north of Jerusalem that serves as the de facto administrative capital of the Palestinian National Authority. The Qalandiya checkpoint — infamous for its long waits and traffic congestion — separates Ramallah and the rest of the West Bank from Jerusalem.

Inside, a hulking guard pulls a 16-year-old boy named Salem* into the room for a reading of his charges. He is wearing black and orange Nike high tops, and his ankles are chained together. His cheeks are ruddy, yet to grow facial hair, and he is clothed in a dark brown jumpsuit signifying he is in administrative detention. People in administrative detention are held without trial without committing a crime, under the assumption that they will break the law in the future.

Salem’s parents lurch to the edge of their plastic chairs when he enters the room, and he flashes them a smile. He doesn’t look worried, but his parents do.

His charge? Throwing stones at Israeli soldiers. It carries a maximum sentence of 10 to 20 years, depending on the age of the accused.

Israel is the only country in the world that automatically prosecutes children in military court. Since the West Bank is under Israeli military occupation, its Palestinian residents are subject to the military justice system. Israelis, even settlers illegally residing in the West Bank, are tried in the civil court system.

That means Palestinian children as young as 12 can be charged with crimes and jailed in military prison. Israeli newspaper Haaretz obtained the Israeli Defense Forces’ annual report and learned that in 2010, the military courts went through 9,542 cases. Only 25 were full acquittals. That’s a conviction rate of 99.74%.

A small handful of guards, soldiers, and lawyers comprise the court for Salem’s hearing, all sitting under an emblem of a menorah. The judge speaks loudly and quickly in Hebrew. I don’t understand what he’s saying — neither do Salem and his parents. The boy and his parents speak only Arabic, so their lawyer acts as an interpreter as quickly as she can. The military courts are conducted entirely in Hebrew, and using a language that most Palestinians cannot understand is commonly cited as a tactic to make Palestinians feel like they have no control over their lives.

Five minutes later, Salem’s hearing is finished before it starts. Farah Bayadsi, the DCIP lawyer I am with, explains the hearing is postponed, since the Israelis do not have time to finish before lunch.

His parents stand in outrage as he is yanked out of the court, and he blows them a kiss before disappearing from sight.

I’m whisked away before I can speak to Salem’s parents — though, to be honest, I wasn’t sure what to say. Images from his brief encounter with the judge replay in my mind. His bright sneakers contrasting starkly with the heavy chains around his ankles. I think of the same shoes sitting in the closet of my 15-year-old brother.

While Salem’s fate is yet to be decided, he, and many others like him, will likely serve at least several months in Ofer prison as part of a plea deal. With a 99% conviction rate, pleading guilty and serving six months is the quickest way to get out of detention. Challenging the charge is a drawn-out, risky process that could result in a 10-year sentence. The system so rarely grants bail that a plea deal is the quickest way out for children ensnared in the military court system.

“The dual justice system is discrimination,” said Ayed Abu Eqtaish, director of DCIP’s accountability program, in reference to Israel’s two justice systems: one for Palestinians and one for Israelis. While Israeli youths are offered rehabilitative programs in the civil justice system, Palestinian children are imprisoned in a punitive system with no course of rehab.

Adil, a 16-year-old Palestinian teenager not so different from Salem, is on the other side of his experience with Ofer. He was arrested last September in his hometown of Biddu, a small town of 6,000 in the West Bank outside Jerusalem, and beaten by Israeli soldiers in plainclothes after being accused of taking part in a protest.

Adil told me about his arrest with a notable precision. He was walking around town with some friends when he realized they had stumbled upon a demonstration of Palestinian protesters. They were turning to leave when Israeli soldiers dressed in civilian clothes approached him, asking if they were demonstrators. Before given a chance to answer, one of the soldiers hit Adil over the head. He fell to the ground, where the soldier stepped on his neck. He beat him until he was nearly unconscious, then pulled his shirt over his face so villagers could not see who he was. Adil and his friends were pulled into a truck where they were brought to Ofer court.

“When I was younger, I thought going to prison was a rite of passage since so many of the men in my town had gone. Now, I never want to go back,” Adil said. During his detention, Adil studied Hebrew with an older Palestinian prisoner. He slept in a small room, stuffed with five sets of bunk beds, with nine other boys. Between the hours of 4:30 p.m. and 6:00 a.m., the room was locked and the boys could not leave. Five times a day, the boys prayed together.

“When he was arrested, I didn’t know it was him. I heard that some youth had been arrested in the town center, but I never thought it could be my son. I went to the area where the demonstrations were, and saw a boy with his shirt pulled over his face. I recognized his pants, and knew it was him. Then I started screaming,” she said.

DCIP connected Adil with the pro bono lawyer I met at Ofer, Farah, who guided his family through the entire process. She speaks fluent Hebrew, Arabic, and English, and says her job is not only that of a lawyer, but one of a translator, therapist, mother, and friend. She is a Palestinian citizen of Israel.

Adil’s mother attended all 11 of his hearings over the months that followed. Eventually, he took a plea deal and served a total of six months in Ofer.

Yom, yom. It means “day after day” in Arabic. I can hear the resignation in her voice.

When asked how he is doing today, Adil and his mother smile.

“I am grateful for the life that I have,” Adil said. During his sentence, he managed to keep up with school and finished his grade on time.

Ayed, who had dedicated his life to serving children like Adil and Salem through DCIP, warns that this forward-facing attitude is common, but dangerous.

“Often you will hear from the child, ‘I am okay, ‘adi,’ while his parents say, ‘This child is different than the child before,’” he said.

‘Adi, a Palestinian Arabic word pronounced from the very back of your throat, means more than just “okay.” Often said with a shrug, ‘adi means “no big deal” — normal.

But the military court system’s treatment of Palestinian children is anything but normal. Adil’s brutal arrest is not a unique story, and many children report abusive treatment throughout their arrest, interrogation, and detention. A detained child is at high risk of PTSD, depression, anxiety, and even suicide.

However, due to cultural stigma associated with mental health problems and lack of long-term services, children rarely seek the psychological help they need, Ayed explained.

After a child’s sentence is complete, DCIP does an initial psychological evaluation and refers kids as needed to partner organizations in the West Bank such as the Palestine Counseling Center and the YMCA Rehabilitation Program.

I am thinking again of Salem’s shoes. Of this Palestinian child’s feet wrapped in chains, choking his movement. His parents, and others who travel to Ofer, take winding paths to the prison because of their own movement restrictions.

But they move anyway, bit by bit. Salem can’t stretch his legs, so he takes short steps. His parents travel through military checkpoints, so they drive slowly and carefully. Day after day, Ayed from DCIP advocates for Palestinian children caught in the military court system — even though he lost hope long ago that the system will stop its mistreatment of children as long as occupation continues. So, Ayed focuses on small wins — a plea deal for Adil, one for Salem, too, and the next child and the next and the next.

Ofer’s fences and chains keep Palestinian children caged, for now. But someday — whether it is at the end of a six-month sentence or the end of the occupation — Palestine’s children will run free.

*   Salem and Adil’s names have been changed for privacy and safety. In Arabic, “Salem” means safe and protected. “Adil” means just and fair.