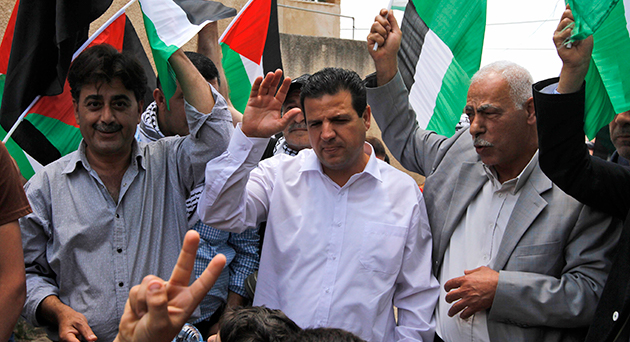 Sitting among the opposition will be the predominantly Arab-Israeli alliances Hadash-Ta’al and Ra’am-Balad, the offshoots of the now-defunct Joint List. Hadash-Ta’al won six seats in the election while Ra’am-Balad won four, giving the alliances a combined total of ten Knesset seats. The alliances are expected to work together to advance the interests of Israel’s some 1.8 million Palestinian citizens, which are frequently denied equal access to resources, education and housing.

They also plan to combat the Nation-State Law, which in July declared Israel the “national home of the Jewish people” and deprived Palestinian citizens of their right to national self-determination.

Here are the ten new Knesset members from Hadash-Ta’al and Ra’am-Balad who will be fighting for Palestinian citizens of Israel in the upcoming parliament.

Born and raised in Haifa, Ayman Odeh boasts a long political career. He represented the Hadash party on the Haifa City Council in the late 1990s and early 2000s, becoming the party’s secretary general in 2006. He was elected leader of the party in 2015 and placed first on the Joint List’s ticket for the general election that year.

The Joint List performed well in 2015 – winning 13 seats to become the Knesset’s third biggest party – and Odeh has since become a mainstay of Israeli politics. He has spoken out on Israel’s policy towards the besieged Gaza Strip, calling the public’s reaction to Israel’s shooting of unarmed protesters during the Great March of Return a blatant example of “contempt for human life”.

Odeh has also vowed to combat the Nation-State Law, saying: “When the rights of minorities are trampled on in a democracy, it is not an internal issue. The law harms Arab citizens, Israeli democracy and the possibility of forming a Palestinian state and achieving peace.”

Ahmad Tibi was born in Tayibe, near the Green Line which separates the occupied West Bank from Israel. He qualified as a gynaecologist at the Hebrew University of Jerusalem and held a residency at the city’s Hadassah Hospital. He entered politics to work with the Palestine Liberation Organisation (PLO) and was an advisor to former Palestinian President Yasser Arafat. He later established the Ta’al party and was elected to the Knesset in 1999, serving as an MK ever since.

Throughout his career, Tibi has stressed the need for Israel to treat its Palestinian citizens equally if it is to be considered a democracy. In the wake of the election, Tibi has spoken out against the anti-Palestinian rhetoric that characterised many right-wing campaigns, including that of Netanyahu’s Likud party which ran on the slogan “it’s either Bibi or Tibi” to scaremonger voters into supporting the party.

Speaking to Israel’s President Reuven Rivlin during coalition discussions, Tibi said: “The claim that we’re streaming to the polling stations creates second-class citizens and voters. Think about what would happen if they would place 1,300 cameras in Arab neighbourhoods in France,” referring to revelations that a Likud PR company orchestrated a stunt to scare Arab-Israeli voters away from polling stations on election day.

Aida Touma-Sliman was born in Nazareth and studied at the University of Haifa. She is a long-term member of the Hadash party and worked as editor-in-chief of Al-Ittihad newspaper. She was elected to the Knesset in 2015 and headed its Committee on the Status of Women and Gender Equality. She retained her seat in this year’s election.

Speaking to Haaretz about her upcoming Knesset term, Touma-Sliman said: “I want to have more influence. Workers’ rights and welfare, I want to go there. And I also want to be involved in some of the bigger political issues, like achieving peace and fighting the [Israeli] occupation. After all, as long as basic human rights are being trampled on, there’s not much progress you can make in advancing women’s rights. All these things are connected.”

Osama Saadi trained as a lawyer at the Hebrew University of Jerusalem and became secretary general of the Ta’al party. He joined the Knesset as part of the Joint List in 2015, but resigned in 2017 as part of a rotation agreement.

Speaking on election day about the low voter turnoutamong Palestinian citizens of Israel, Saadi said: “In terms of the boycotters, I think after everything Benjamin Netanyahu did with [his] racist incitement and entering the fascist right, and wanting to annexthe occupied areas into Israel and annex the Golan [Heights] and the moving of the [US] embassy and recognition of Jerusalem [as Israel’s capital], I think that the only response is to go vote and to vote with full force.”

Cassif is a new face in the Knesset and occupies the Hadash party’s “Jewish seat”, given that approximatelyten per cent of the party’s members are Jewish-Israelis. Although Cassif has been active in Hadash for decades, by day he is a political science professor at Jerusalem’s Hebrew University.

Cassif was thrust into the spotlight shortly after announcing his candidacy when former Defence Minister, Avigdor Lieberman, submitted a petition to the country’s Central Elections Committee to have him banned from participating in the election. The Supreme Court subsequently overturned the ban and Cassif was elected to the Knesset.

Cassif believes that cooperation between Jewish and Arab-Israelis is the only way forward for Israel’s left-wing. He has labelled centre-left parties like Benny Gantz’s Blue and White (Kahol Lavan) alliance and the Israeli Labor party “political chickens” for refusing to team up with the Arab-Israeli alliances and provide a serious alternative to the right-wing.

Yousef Jabareen was born in Umm Al-Fahm, a Palestinian village located near the Green Line. He studied law at the Hebrew University of Jerusalem and later gained a PhD at Georgetown in Washington DC, before going on to teach at universities in Israel. He was elected to the Knesset in 2015 as part of the Joint List, and has now been re-elected under the Hadash-Ta’al alliance.

Jabareen has spoken about the need to tackle Palestinian citizens of Israel’s disillusionment with Israel’s political system, seeing the community as crucial to the broader Palestinian struggle. He told MEMO: “I definitely understand [people’s disillusionment], but I believe that we, as a national indigenous community who face discrimination, alienation and systematic exclusion from the public sphere of our homeland, don’t have the luxury of giving up and not being represented in these influential positions.”

Mansour Abbas was previously spokesperson and deputy chairman of Ra’am, a nationalist party popular with Bedouin voters. He was elected to lead the party ahead of the election and, following a merger with Balad in February, will now serve as the head of the Ra’am-Balad alliance.

Faced with low voter turnout on election day and the possibility that Ra’am-Balad could fall below the minimum threshold, Abbas sent 6,000 activists to Arab-Israeli towns across the country. Speaking about the need to engage with politics, Abbas said “we [Arab-Israelis] have the possibility to foment change, which must begin first and foremost with participating in the election”.

Mtanes Shehadeh has previously worked with Mada Al-Carmel, a Haifa-based organisation which conducts research into Palestinian citizens of Israel. He was elected chairman of Balad during the party’s primaries in February, succeeding Jamal Zahalka who decided not to run in the general election.

Shehadeh has said that Balad “represents the national movement within Arab society and has the most democratic policy platform — a state of all its citizens”. He also stresses that Palestinian citizens should not be cowed by the right-wing parties attempts to disenfranchise them, saying on election day that “the right is planning to crush the Arab parties, it wants to erase us [from] the political arena. This is Netanyahu’s dream”.

Abd Al-Hakim Hajj Yahya was born in Tayibe and qualified as a civil engineer, before going on to serve as mayor of the city. He is a long-time member of Ra’am and was elected to the Knesset in 2015 as part of the Joint List, serving as a member of the Economic Affairs Committee.

Yahya has previously called Israel’s policy in the occupied West Bank “creeping annexation”, labelling Israel’s illegal settlers “war criminals who are in the territories as settlers […] in violation of international law”.

Heba Yazbak was born in Nazareth and studied social work at the University of Haifa, later gaining a PhD from Tel Aviv University. She has been involved in the Balad party since university and was elected to the Knesset for the first time this year.

In a pre-election interview with Haaretz, Yazbak said she intends to use her platform to tackle social issues facing Palestinian citizens of Israel. “There are many issues related to social welfare I want to advance that affect every Arab household,” she said, citing issues such as poverty, family violence, care for the elderly, at-risk youth and those with special needs.

She is also keen to integrate Arab-Israeli women into the workplace, saying: “Employment strengthens women economically and socially, in the immediate family and the extended family, and this empowers them in society.”