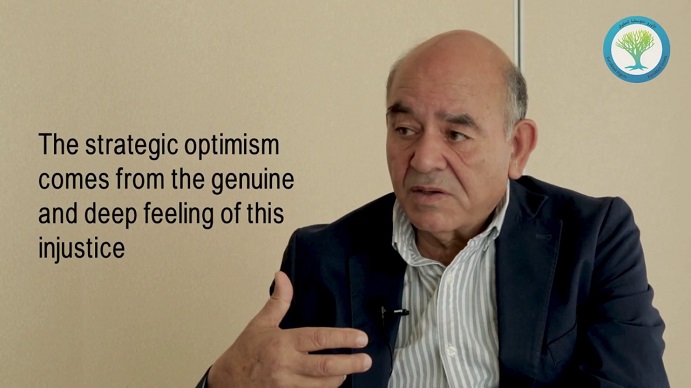 Raji Sourani, Director of Palestinian Center for Human Rights (PCHR), gave his testimony before the Committee on the Exercise of the Inalienable Rights of the Palestinian People (CEIRPP), which was held in New York City, via video conference as he was not allowed to enter the United States, despite being invited by the United Nations.

In his testimony, Sourani explained the results of the inhuman and illegal closure on the Gaza Strip, which is the biggest man-made catastrophe of our time. He stressed that the closure has put the Gaza Strip in an unprecedented situation as the unemployment rate reached 65%, the poverty rate reached 90%, and 80% of the residents receive aids from international institutions, in addition to the ongoing crises impinging on citizens in Gaza, such as the electricity and wastewater crises, which are caused by the closure.

Moreover, in his testimony, Sourani said that although all international organizations condemned this, the closure is still ongoing. During this closure, Israeli forces carried out three offensives, where Palestinian civilians and their property were prime victims.

Sourani stressed that, in the Great March of Return and Breaking the Siege, Israel has committed war crimes and crimes against humanity when targeting Palestinian civilians, including children, women, medical personnel, persons with disabilities, and journalists by the Israeli snipers deployed behind the fortified military towers. Meanwhile, not a single life of any Israeli soldier was posed to a threat as none of the soldiers was wounded or killed, noting that the right to peaceful assembly and the right to freedom of expression are fundamental rights of civilians regardless of their presence along the borders or inside the cities.

The Commission of Inquiry formed by the UN Human Rights Council called on holding accountable those who killed and wounded Palestinian civilians, including persons with disabilities, children, patients, and journalists participating in in the Great March of Return and Breaking the Siege. The Commission also urged that this file  should be referred to the International Criminal Court (ICC) to conduct investigations into all crimes attributed to the Israeli forces. It is noteworthy that all international human rights organizations and Special Rapporteurs have considered Israel’s practices as a crime against humanity.

Furthermore, Sourani emphasized that the ethnic cleansing and the efforts to create a Jewish Majority by the Israeli forces in the holy city of Jerusalem aim at imposing the de facto policy, in practice and law, reaching its final stages.

Regarding the West Bank, Sourani stressed that settlement expansion, both vertically and horizontally, is continuing at an accelerated pace through establishing new settlements and large networks of roads between the Israeli settlements, cities and villages. Due to presence of such network of roads and settlements, Palestinian cities, villages and camps are encircled, prevented from strategically expanding, and divided into narrow and distant cantons.

The Israeli forces confiscate Palestinian lands on a daily basis, cutting off and separating the West Bank from Jerusalem and the northern West Bank communities from the southern one in addition to separating the cities, villages and refugee camps, impinging on their ties and longstanding communication. As a result, in law and practice, Israel has taken control of more than 70% of the West Bank, including Jerusalem, creating a new apartheid.

Sourani also pointed out that the Israeli forces on a daily basis continue to storm Palestinian cities, villages and refugee camps and to carry out wilful killings and arrests without exception, even in areas classified as A, which are PA controlled areas.

All of this happens due to the legal and political immunity provided by the United States to Israel, including immunity from the ICC in terms of not being prosecuted before the international courts and non-application of the rule of law.

Sourani said that 25 years after signing the Oslo Accords, the reality in the occupied territory led firstly to attempts of ethnic cleansing and making a Jewish Majority in Jerusalem and imposing a new de facto situation in the City.  Secondly, this led to annexing most of the West Bank lands in favour of settlements and creating a new apartheid; and thirdly a tightening closure that has been ongoing for 12 years in Gaza, banning the freedom of movement of people and goods, and economic and social strangulation.

“In view of this painful and bitter reality, no one is talking about Palestinian self-determination, ending the occupation or establishing a Palestinian state in accordance with UN resolutions,” Sourani said, “We as Palestinians are living the worst phase in our history  and are facing an unprecedented situation since the Nakba.  He elaborated that the two-state solution in practice is over.

Sourani pointed out that the prosecution of Israeli war criminals has become almost impossible, especially after the amendments made to the legislations in Europe and the political pressure practiced by the United States against the ICC and its Prosecutor and judges.

At the end of his testimony, Sourani stressed that the Palestinians are the stones of the valley.  They have been here since ever and will stay here forever, clinging to their land. No one would be able to unsettle them. They will continue their struggle for their right to self-determination and will never be good victims of an occupation that commits war crimes and crimes against humanity.  He added that Palestinians have the right to enjoy dignity, and the right to emancipate themselves from occupation. He stressed that despite the harsh reality, but no one can, despite everything, take hope out of our minds and hearts.

It should be noted that Sourani together with Professor S. Michael Lynk, the Special Rapporteur on the situation of human rights in the Palestinian Territory occupied since 1967, participated in the session that was headed by Dr. Mouin Rabbani

Effort to blame BDS for anti-Semitism thwarted by facts

Rights groups call on Israel to stop its ‘military attacks’ on...

Debat Stop settlements: on the road to Justice in Palestine

Can Abbas repudiate all agreements with Israel ?