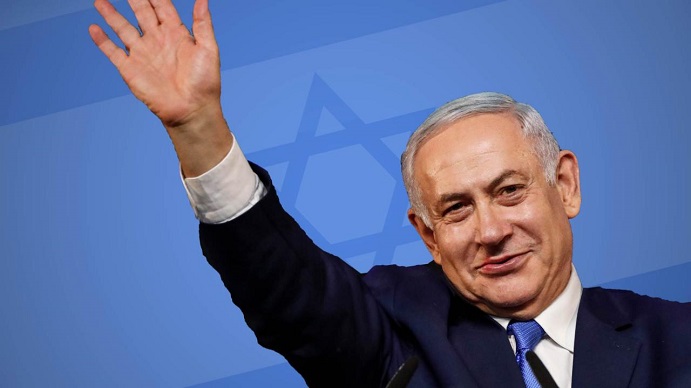 Over the past decade, Benjamin Netanyahu has remade Israeli politics in his own image. Though his career now hangs by a thread, his legacy of far-right pandering and cold-blooded “management” of Palestinian oppression will live on.

Last week, for the second time in six months, Israeli president Reuven Rivlin asked Benjamin Netanyahu to form a government. This time, however, the task facing the man they call “King Bibi” is even more difficult, having lost his Knesset majority to his rival Benny Gantz. Gantz, a hawkish ex-IDF general, heads the center-right Blue and White party, which equalled Likud’s vote share in April’s election before narrowly beating them last week. With the parliamentary math failing to support any simple majority, both parties signalled their willingness to form a unity government. However, Netanyahu refused to relinquish power altogether, and Gantz rebuffed his offer to rotate the premiership, citing Netanyahu’s looming corruption indictments. In the absence of a viable Likud–Blue and White coalition, it was the minute numerical advantage of Netanyahu’s electoral bloc (56 to Gantz’s 55, with 61 needed for a majority) that convinced Rivlin to approach him first.

At first glance, the situation looks intractable. Netanyahu’s most natural path to government goes through Avigdor Lieberman, the loudmouthed leader of the right-wing Yisrael Beiteinu party. Lieberman is a distinctively Israeli creation, a settler-politician as virulent in his hatred toward Israel’s ultra-Orthodox as he is toward the Palestinians. His nine seats would put Likud comfortably into a majority; Netanyahu’s problem is that it was Lieberman who prevented him from forming a government in April, by refusing to sit in coalition with the ultra-Orthodox party Shas. Barring a stunning abdication of principle, Yisrael Beiteinu is a dead end.

Alternatively, Netanyahu may appeal to one of the centrist parties currently affiliated with Gantz, or he may try to pry a sufficient number of defectors from within Blue and White. These schemes will be amply supported by lurid talk of the Iranian menace and promises of annexation of the West Bank, though if they fail — and it’s likely they will — the future will once again be up to Rivlin’s discretion. Whether or not he subsequently recommends Gantz depends on the latter’s ability to command a unity government, as Blue and White otherwise has no path to a majority that doesn’t include both Lieberman and the Arab parties. If Rivlin refuses to recommend Gantz, or if Gantz is unable to persuade a sufficient number of Bibi loyalists to anoint him leader, Israel will head to a third election after the New Year. (In a bleakly comic way, this may be the best outcome for Palestinians, as it would deprive Israel of a functioning government until at least April.)

“The people have voted for unity,” Gantz declared after the initial count emerged. Regardless of the final outcome, the observation is hard to argue with: last Tuesday’s results illuminated a politics that has reached agreement on most matters, and that is left squabbling over questions of implementation. Likud and Blue and White are not natural enemies; both agree on the inevitability of annexation, though there is some contention over how much of the West Bank should be seized. Both would maintain the blockade of Gaza, and Gantz has assured voters he’d deliver the next bombardment with as much bloodless efficiency as any Likudnik. For Palestinians in the occupied territories, their differences are largely cosmetic — the state racism of Blue and White versus the vulgar incitement of Netanyahu.

The consensual world of Israeli politics does, however, provide three genuine alternatives for the disgruntled voter. First, there are the parties of the Haredim, the ultra-Orthodox Jews who have increasingly dominated the country’s attention in recent years. They care little for the Palestinians, or the exact shape of Israel’s borders; their singular concern is to restructure the country along scriptural lines — to ban women from the Western Wall, to prohibit public transport on the Sabbath, and so on. Then there is the radical right, who break with the pro-annexation consensus by demanding that Israel seize the entire West Bank, and then deal with the attendant Arab majority through ethnic cleansing. Finally, there is the Arab left, who want to shift the dial back toward a two-state solution, as well as end the myriad petty apartheids inflicted upon Israel’s Arab citizens.

Aside from the Arab parties, which picked up three valuable Knesset seats, this election was a disappointment for those lying outside the consensus. The mask-off Kahanists of Otzma Yehudit — followers of Meir Kahane, the preacher of Jewish supremacist violence who died in 1990 — failed to reach the electoral threshold, while the tepid performance of the other radical right parties showed that most Israelis are still cool on full-scale annexation. As ever, strict rabbinical injunctions led the Haredim to turn out in droves, but given the circumstances surrounding the previous election, they were unlikely to ever end up in government. Count the votes of the “centrist” parties — not just Likud and Blue and White, but Yisrael Beiteinu, Labour, and Democratic Union — and a consensus becomes clear. By a margin of 83 to 37, Israelis voted for the status quo: a steady hand on the tiller of the occupation, and secular domestic governance unfettered by Halakhic intrusion.

The consensus also explains why all this breathless electoral drama feels so tedious, its stakes so curiously low. Netanyahu, Gantz, or the WeWork guy; it doesn’t particularly matter who governs when the core assumptions are so utterly beyond question. Israeli democracy, as currently constituted, is irreducibly right wing. A pro-peace, anti-occupation politics won’t be conjured from the mass of parties presently competing for power. As much as any war or annexation, this is Netanyahu’s legacy.

“The depressing truth,” Tony Judt wrote in 2003, “is that Israel today is bad for the Jews.” His point — that Israel’s claim to speak for all Jews was making life in the diaspora more dangerous — has a hideous resonance today, with global antisemitism once again in the ascendance. But Judt wrote this at the middle point of the Second Intifada, when suicide bombings were part of the quotidian fabric of Israeli life. Israel couldn’t keep its own Jews safe, let alone those living outside its borders. By the time the bombings had stopped, an enormous wall had been constructed in the West Bank, preventing bombers from crossing the Green Line. While Israel might still be bad for the Jews, outside of the more remote settlements, it’s no longer especially dangerous for them.

Netanyahu may not have built the Western Wall, but in his ten years as prime minister, he has constructed a thousand more, transforming the West Bank into a vast maze of checkpoints, to be navigated daily by millions of Palestinians. Over the past decade, he has perfected a style of government that may aptly be called “occupation management.” The militarization of Palestinian life is certainly a crucial element of this, the endless walls and roads and checkpoints keeping Palestinians from Israeli cities. But, conveniently, these walls also keep Palestinians from one another, creating three distinct populations — Gazans, Israeli Arabs, and those living in the West Bank — with divergent economic and political interests. The third prong of this strategy concerns the Palestinian National Authority (PNA), which putatively rules over “Area A,” the section of the West Bank containing the vast majority of Palestinians. In reality, the sovereignty of Area A is a myth, and the PNA exists mostly as a reconnaissance force for Israeli military raids. Like the rest of Palestine’s tattered institutions, it subsists largely on Israeli handouts.

By trifurcating Palestine, hollowing out its institutions, and policing everyday Palestinian life, Netanyahu has been able to contain Palestinian resistance. In the process, he has successfully insulated Israelis from the brute facts of the occupation. It helps that he has presided over a strong economy, with a class structure that localizes poverty in isolated Arab and Haredi areas. Aside from the Kahanist right and the ever-slimming ranks of the radical left, Jewish Israelis have little to complain about. But the effectiveness of occupation management goes far beyond keeping Likud in power; it has created a new status quo that will prove difficult, perhaps impossible, to undo. By making Palestinian despair an ineluctable condition of Israeli flourishing, Netanyahu has done more than anyone to destroy the conditions for a future peace.

Of Kings and Generals

Given all this, Netanyahu’s current predicament is puzzling. Why, with an enviable standard of living and an enthusiastic American patron, is he closer than ever to defeat? How can he have outlived his usefulness to a politics he built? The answer to this is partly to do with longevity — people living in democracies don’t like being ruled by kings. It is also due in part to the rapid demographic growth of the ultra-Orthodox community, which makes them a valuable political commodity, but has always been something of a doomsday clock for the right wing.

Ultimately, however, the roots of Netanyahu’s electoral quandary lie in the most dismal irony of all. It is precisely the success of his inimitable brand of occupation management that created the conditions for his removal. Initially, suffocating the West Bank and fortifying the settlements provided him with a brittle, purposeless left opposition that he found easy to beat. But the strategy proved too effective: the opposition adjusted to the post-peace landscape by abandoning the Palestinians, and Netanyahu was forced to find new ways to distinguish himself. He began shifting further right, at first rhetorically, and then in dramatic and alarming ways: writing apartheid into the constitution, resuscitating Kahanism by allying with Otzma Yehudit.

Israelis can stomach a great deal of anti-Arab racism. But call distinguished ex-IDF generals “anti-Zionist” too many times, and people begin to tire of the trick. In fact, Netanyahu has dragged Israeli politics so far rightward that any further shift would be actively harmful to his own project. Israelis implicitly understand that their prosperity and security, though granted to them by Netanyahu, is threatened by the radical version of Zionism he now indulges. Implement full-scale annexation and Israel’s Jewish majority may collapse. Punish Palestine too severely and you risk another Intifada. If Gantz wins a third election in 2020, those within Likud may come to see him as a guardian angel, sent to save Bibi-ism from Netanyahu himself.

The point would probably be lost on someone so singularly concerned with immediate power, especially with the prospect of another four years now tangible. Whether he is able to cling on, limpet-like, for one more Knesset term; or whether, in six months’ time, he finds himself living under house arrest at his palatial home in Caesarea, serving out his sentence for corruption while Prime Minister Gantz pounds Gaza with missiles — Netanyahu has already won.

Gantz may govern like a general, but he’ll never be a king.

Douglas Gerrard is a writer based in London; his work has appeared in Tribune and Current Affairs, among others.