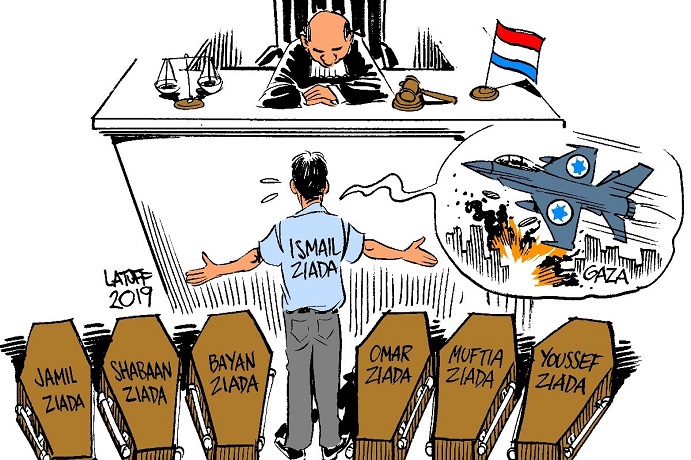 On the day of Israel’s elections 17 September 2019 a Dutch court will be discussing the charges of war crimes against the opposition contender Benny Gantz, who was army Chief of Staff during the Gaza onslaught of 2014, as well as charges against then Air Force chief Amir Eshel.

On Tuesday 17th September, the District Court of The Hague will hold a hearing on the admissibility of a case brought by Dutch citizen Ismail Ziada against the former Chief of General Staff of the Israeli Defence Force (IDF), Benny Gantz and former Commander of the IDF Air Force, Amir Eshel for the bombing of the Ziada family home in Gaza. The attack resulted in the death of six members of Mr Ziada’s immediate family.

The bombing of the Ziada family home in the Bureij refugee camp, Gaza, took place on July 20th, 2014. It was a targeted IDF attack that resulted in the death of Ismail Ziada’s 75-year-old mother, three brothers, his sister-in-law, a 12-year-old nephew and a visiting friend. Mr Ziada contends that the attack on the family home was a violation of international humanitarian law and constituted a gross violation of internationally recognised human rights principles.

During the Israeli attacks on Gaza in 2014, approximately 2000 Palestinians, including 500 children, were killed. The Israeli military operation, codenamed “Protective Edge”, was a widespread and systematic attack on civilian targets with the vast majority of casualties being non-combatants.

Mr Gantz and Mr Eshel claim immunity from the Dutch court and contend that Mr Ziada should have presented his claim in an Israeli court. Neither Mr Gantz nor Mr Eshel are expected to be present on the day of the hearing. They will be represented by the law firms Florent and Jahea Raymakers. Since his retirement, Mr Gantz has formed a new political party “Hosen Le-Yisrael” (Israel Resilience Party). On the day of the hearing, Mr Gantz will be running for office against Benjamin Netanyahu in the Israeli national elections.

For further information please contact the Palestine Justice Campaign spokesperson by email at palestinejusticecampaign@gmail.com or by telephone at +31 619895090.

For more information on the case, please follow this link https://palestinejusticecampaign.wordpress.com/

For an English translation of the legal documents follow this link http://www.nuhanovicfoundation.org/en/ziada-case/

To donate the campaign please follow this link https://www.gofundme.com/palestine-justice-campaign

The hearing will begin at 09:30 CEST on Tuesday 17th of September at the District court of The Hague

The proceedings will be conducted in Dutch however, simultaneous English interpretation will be available.