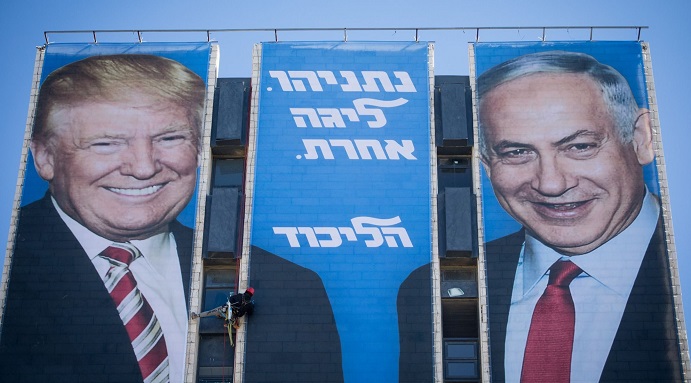 There has been a lot of speculation lately about a grand bargain between Donald Trump and Benjamin Netanyahu as the Israeli elections approach. The theory goes that Trump will wade into Israeli politics to try and give the embattled Netanyahu another term as P.M. (and stay out of jail), but Trump will demand something from Netanyahu– Laying down for Trump to negotiate with arch-enemy Iran.

Michael Koplow of the Israel Policy Forum describes the possible deal. After the Israeli election September 17, Trump announces a “peace plan” in which Israel gets to annex the illegally-occupied West Bank. The plan lands just as the horse-trading is going on between potential Israeli governing coalitions. Netanyahu then puts pressure on the centrists who have vowed to oust him to accept his staying on as P.M. because Netanyahu has such a good relationship to Trump — thereby pushing aside Netanyahu’s pending indictment on corruption charges.

In return, Trump gets to negotiate with Iran– presumably for a version of the Obama deal — without Netanyahu submarining the deal, as he has done before. Koplow speculates:

[Indications are] the White House… is planning on releasing a peace plan during coalition negotiations – which is the way to avoid charges of trying to influence the outcome of the election itself – and having in that peace plan components that will help Netanyahu form a government; namely, American cover for Israel to proceed with unilateral annexation. Should the election result in another deadlock and this scenario with a Trump peace initiative plays out, Netanyahu will point to the unprecedented concession that he has gotten from the U.S. – something far beyond the Bush-Sharon letter [of 2004], which effectively conceded future Israeli sovereignty over settlement blocs but only in the context of a negotiated peace agreement – and argue that none of this would have happened absent his leadership and the relationship that he has cultivated with Trump. When portrayed as a historic opportunity to apply sovereignty to areas of the West Bank that may never again present itself, and which depends on Netanyahu in order to see it through, it will be difficult for Kachol Lavan to remain insistent that it will only join a unity government that does not include Netanyahu.

Kahol Lavan, or Blue and White, is the chief rival to Netanyahu’s Likud. Both parties poll at about 30 seats (out of 120 in the Israeli parliament) and were deadlocked after the April election, with neither side able to form a majority coalition. Kahol Lavan has said it would only make a “unity” government with Likud if Netanyahu goes, because of the pending indictment. But Netanyahu’s campaign has been his claim that he’s in “Another League,” and highlighted his relationships with Trump and Putin.

“There is a danger” that the Trump administration may announce its support for Israel annexing parts of the West Bank “to compensate” for a possible “rapprochement with Iran,” Sneh said in a phone interview.

That strong alliance of course includes Sheldon Adelson, who funds both politicians, and presidential son-in-law Jared Kushner, whose rightwing Zionist family is close to Netanyahu.

Koplow notes the Iran piece of the grand bargain:

As Trump has made his desire to negotiate with the Iranian regime increasingly clear, Netanyahu and Israeli officials have made their concern over this outcome just as clear. While it is difficult to imagine Netanyahu publicly confronting Trump on anything, Netanyahu has made great political hay over the past four years of his willingness to stand up to President Obama over this precise issue, and forsaking the same principle when it comes to Trump will create a real credibility problem for the prime minister. A peace initiative that enables Netanyahu to remain prime minister by allowing him to take credit for American acquiescence to West Bank annexation or application of Israeli sovereignty over settlements is the most valuable chip that Trump is able to cash in if seeking to forestall a Netanyahu response to a future Iran policy that looks awfully similar to Obama’s.

If Trump does indeed sit down across from the Iranians and ends up negotiating a deal that is in any way short of the complete destruction of Iran’s entire nuclear program and existing capacity, the one source of opposition that he will have to worry about the most will be Israel. Trump’s Israeli-Palestinian peace initiative may turn out to be the best answer to this problem, putting immense pressure on Netanyahu to choose another term as prime minister….

Meanwhile, there has been wide speculation that Israel’s aggression across the region in recent days is Netanyahu’s effort to put the kibosh [pressure] on US talks with Iran. Sina Toossi at Lobelog:

The Israeli government of Prime Minister Benjamin Netanyahu has in recent days launched a series of military strikes across the Middle East. The scope of the attacks itself represents a new escalation for Israel, bombing not just regional allies of Iran in Syria but also targets in Lebanon and deep inside Iraq. Notably, the attacks are simultaneous with new diplomatic momentum between the U.S. and Iran and talk of a potential meeting between Iranian President Hassan Rouhani and President Trump…

A new conflagration involving Israel and Iran and its regional allies would tank prospects for U.S.-Iran negotiations and entangle the U.S. in the region for years to come. Some figures in the Trump administration recognize this, with U.S. officials recently telling The New York Times that “Israel is responsible for the strikes” in Iraq and was “pushing the limits.” Indeed, America’s client states cannot be allowed to determine U.S. policy towards the region.

So to be clear: Iraqis die, Syrians die, Palestinians suffer, so that the major powers, in this case the U.S. and Israel, figure out their politics. The great game, as the Brits used to call it.

Philip Weiss is founder and co-editor of Mondoweiss.net.