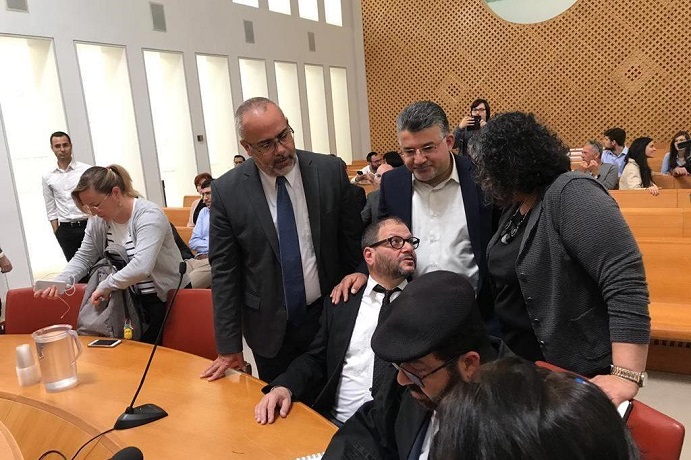 Released today, the new report – “Elected but Restricted: Shrinking space for Palestinian parliamentarians in Israel’s Knesset” – argues this discrimination is threatening Palestinian MKs’ right to freedom of expression, leaving them unable to properly represent and defend the rights of Israel’s 1.8 million Palestinian citizens.

Amnesty reviewed “existing and proposed legislation, ethical regulations issued by the Knesset, relevant Israeli government statements and reports by human rights groups,” as well as interviewing Palestinian MKs and representatives of relevant NGOs throughout the first half of 2019.

As an example of legislation which discriminates against Arab-Israeli MKs, Amnesty cited a 2016 amendment to Israel’s “Basic Law: The Knesset” which allowed the parliament to expel MKs through a majority vote.

This amendment stated that any MK who incites racism or expresses “support for an armed struggle by an enemy state or of a terrorist organization against the State of Israel” can be expelled, but, as Amnesty explains, “statements by various MKs throughout the legislative process demonstrated that the bill was aimed primarily at Palestinian MKs”.

“Amnesty International considers that the amendment unduly limits parliamentarians’ right to freedom of expression, particularly the expression of political views that may not be acceptable to the majority of MKs,” the report read.

The report also discussed the repeated attacks launched on Palestinian MKs by other lawmakers. “Palestinian MKs have faced inflammatory statements apparently intended to delegitimize them and their work by senior Israeli government officials and other MKs,” who regularly accuse them of “treason,” being a “fifth column” or “traitors”.

Former MK Haneen Zoabi – who for a decade represented the Arab-Israeli Balad party but opted not to contest Israel’s election – told Amnesty:

Palestinian MKs face mounting smear campaigns, inflammatory statements and other attempts to delegitimize them and their work by Israeli authorities, the Knesset itself, and by the media.

“The targeting of Palestinian representatives appears to be part of an attempt to hinder their participation in the public and political life in Israel,” she added.

The report also noted that this practice reached fever pitch in the run up to Israel’s last general election in April, with Israeli Prime Minister Benjamin Netanyahu leading the charge by claiming that Israel “is not a state of all its citizens” and using Palestinian MKs in his election slogans to rally right-wing voters.

Yousef Jabareen, an MK for the Hadash party and the Joint List alliance, told MEMO that “we have been witnessing ongoing incitements against Arab MKs and against our political leadership, with the clear goal of delegitimizing our status and our role”.

“These actions by the Netanyahu government are politically motivated, with the goal of preventing us from carrying out our legitimate activities against ethnic discrimination and racism in Israel and against the Israeli occupation,” he continued, stressing that “these actions will not deter us from continuing our struggle as political leaders and human rights defenders.”

Amnesty also put this discrimination against Palestinian MKs in the wider Israeli context, arguing that the space for critical voices is shrinking throughout the country.

“During the past five years, Israeli legislative and executive authorities have subjected those criticising Israeli government policies towards Palestinians to increasing restrictions and obligations,” Amnesty wrote.

It continued: “Israeli authorities have repeatedly threatened, smeared and stigmatized Palestinian and Israeli human rights defenders and organizations, as well as international groups, including Amnesty International, labelling them as “traitors” and “foreign agents”, among other terms.”

The NGO therefore called on the Israeli government to “ensure respect for the right to freedom of expression of elected officials without discrimination” and to “refrain from using language that delegitimizes or stigmatizes Palestinian MKs and publicly.”