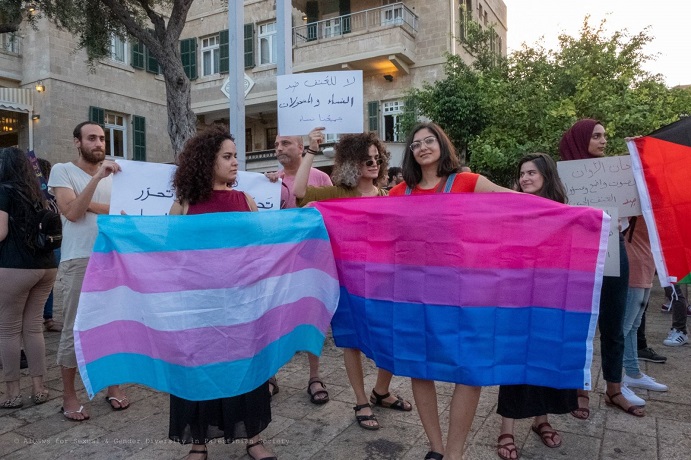 We publish the response of the alQaws Palestinian LGBT group [for Sexual & Gender Diversity in Palestinian Society] to the latest repressive moves by the Palestinian Authority, as well as their warning about Israeli “pinkwashing” of the crisis.

On Saturday, August 17th, the spokesperson for the Palestinian Authority police, Louai Irzeqat, issued a statement concerning alQaws’ activities in the West Bank. This first-ever statement about alQaws declared that the PA police would prohibit any event organized or held by alQaws for Gender and Sexual Diversity in Palestinian Society. The police claimed it goes against “traditional Palestinian values” accusing us as “foreign agents.” The statement went further, calling on citizens to complain about any “suspicious” activities and for the persecution of alQaws staff and activists.

This statement comes a week after alQaws held a widely published discussion-based event in Nablus, and three weeks after last month’s stabbing of the Palestinian queer teen and alQaws’ subsequent organizing around it. Prior to Irzeqat’s statement, there had been a wave of unprecedented attacks by dozens of people flocking to alQaws’ social media platforms, angered by the announcement of our event in Nablus, considered a sacred ‘traditional’ Palestinian city. Those hateful messages and posts threatened violence and prosecution, promoted lies about alQaws and our activities, as well as myths about LGBTQ people in general.

alQaws condemns the use of prosecution, intimidation, and threats of arrest, be it by the police or members of society. We have always been public and accessible about our work, through maintaining an active website, social media presence, and engagement in civil society. However, we have never received threats to this extent before. This backlash paves the way for unethical media practices to thrive by adopting and fueling violent discourse that is gaining traction and legitimacy in social media. We believe that the police and Palestinian society at large should focus on combatting the occupation and other forms of violence that tear apart the sensitive fabric of our society and values, instead of prosecuting activists who work tirelessly to end all forms of violence.

This recent backlash is in direct response to the dismantling of societal denial regarding the existence of LGBTQ Palestinians! For the past couple of weeks, alQaws and LGBTQ Palestinians have faced an unprecedented amount of violence and incitement s, which has escalated in the last couple of days. However, it is clear that this backlash is the response to twenty years plus years of field-work. That and alQaws’ strategic focus in the past few years to challenge society’s denial through various grassroots professional and community initiatives.

The crackdown against the fight for sexual and gender liberation is not new. Throughout modern history, it has served as a powerful card for oppressive regimes and governments. Sadly, the PA statement and subsequent public responses are well-honed tactics in the game of political gain and smoke-screening, not limited to the Palestinian Authority or to this particular event.

While we face a storm of attacks and violence, we want to uplift the love and appreciation of our many supporters and allies. Especially those who have publicly rejected the violence and prosecution and taken an active stand in support alQaws and LGBTQ Palestinians. This past month our allies have advocated publicly to combat social violence and take a clear stand in support of LGBTQ people in Palestine.

The police’s statement prohibiting alQaws’ activities in the West Bank and calling for the prosecution of our team is unacceptable. Furthermore, the accusation of alQaws being a “suspicious entity” working to break up the Palestinian society is unfounded and entirely untrue. As such, we request the police and its spokesperson, Irzeqat, read and educate themselves on the values and the work of alQaws.

We are a Palestinian anti-colonial organization that works in all of historical Palestine since 2001 and challenges patriarchal, capitalist and colonial oppression. We have collaborated with dozens of other Palestinian civil society organizations to create programming and spaces to discuss gender and sexual diversity issues. For two decades, alQaws has worked tirelessly to combat the violence of the Israeli occupation as well as social violence against LGBT Palestinians as part of our vision for a liberated Palestine. We will continue to do so despite colonial barriers and threats of prosecution, in the hopes of expanding the discussion around sexual and gender diversity.

On 18 August, the Palestinian Police Force issued an official statement banning the activities of alQaws for Sexual and Gender Diversity in Palestinian Society. The announcement followed an unprecedented attack on alQaws in social media channels. The statement promotes incitement against alQaws – and LGBTQ Palestinians – by encouraging members of society to report on alQaws activities. alQaws has since denounced such fear-mongering by Palestinian authorities, and criticised efforts to position the organisation as a “foreign agent.” alQaws and its members and activists are an integral part of Palestinian civil society working both to support LGBTQ groups in Palestinian society, as well as fighting for freedom from Israeli occupation and colonisation. alQaws has refused the ban on its activities and noted it will continue its work to fight patriarchy, colonialism and homophobia across historical Palestine.

We are overwhelmed by the support we have received from across Palestine and internationally. It is important for us to shed light on 5 ways you can make your report or post more supportive of Palestinian queers and alQaws:

We are constantly talked about but our voices are rarely heard. When reporting on issues that pertain to LGBTQ Palestinians, just ask yourself: whose voice does this story center? If it doesn’t center the voices of LGBTQ Palestinians, then your actions might lead to more harm even if your intentions are to help. Come talk to us and hear our perspective. Do not simply copy and paste translated Hebrew/Israeli media to tell our story. alQaws activists and staff always provide our names when interviewed, so if you read an article/post with a claimed quote from us with no name attributed, you should know it is not from us.

2) Realize that colonialism, patriarchy and homophobia are all connected forms of oppression

Singling out incidents of homophobia in Palestinian society ignores the complexities of Israel’s colonization and military occupation being a contributing factor to Palestinian LGBTQ oppression. We have been living under more than 7 decades of Israel’s military occupation. We see the Israeli occupation of our land and bodies as connected to and amplifying the diverse forms of oppression experienced in every society around the globe. alQaws believes the way to truly counter homophobia in Palestine is by understanding and applying the broader political context in any solidarity activities. We ask that you situate Palestinian LGBTQ oppression within the larger context of Israeli occupation, colonialism, patriarchy and homophobia at large.

Perpetuating tiresome tropes of presenting Palestinians as inherently oppressive and Israel as a liberal state that protects LGBTQ rights is counter-productive and factually baseless. Israel is a settler-colonial state that offers no rights to Palestinians, queer or otherwise. Our struggle as queer Palestinians is against Israeli colonialism as much as it is against homophobia and patriarchy in Palestine. Israel uses pinkwashing tactics to lie about “saving” LGBTQ Palestinians from their society. We ask that you steer away from these lies that are intentionally used to justify their colonization of Palestine. alQaws and our allies in Palestine will continue to amplify our message as well as provide protection and a political home for LGBTQ Palestinians. Israeli LGBTQ groups do not have a say in the work that should be done to fight patriarchy and homophobia in Palestine, including the incitements led by the Palestinian police.

4) Understand our commitment to our local community organizing

alQaws has been organizing in historic Palestine to educate Palestinian society on sexual and gender divesity since 2001. We are a small team of dedicated activists who believe change comes from working within our local context. We put enormous daily and strategic efforts in our local grassroots advocacy organizing in Palestine. Therefore, and especially in such a crisis, we prioritize providing education and safety to our communities first. Please be patient with us as we respond to your media inquiries.

5) Support our work and vision

We believe in the power of people to make social change possible. Some practical ways you can help amplify our vision for change is by educating yourself and your networks on the work that we do at alQaws. Follow us on social media, share our resources, talk to your friends and family about the importance of standing up against bigotry towards LGBTQ people, and make sure that your vision of liberation and freedom in Palestine includes us all.

New US ambassador to Israel will not visit Jewish settlements, will...

‘The Nation’ lifts up Jewish fears over Palestinian realities in a...

In South Africa as in Palestine: Why we must protect the...

Israel’s crackdown on Palestinians in Negev/Naqab threatens Bedouins and its own...

[another crime] Israel probes death of elderly Palestinian who was detained