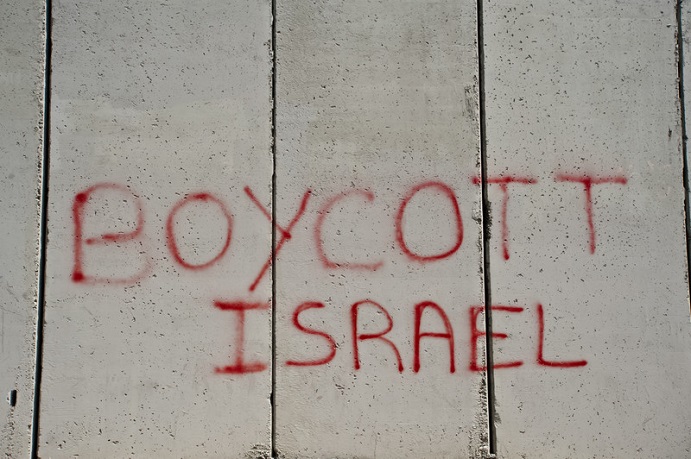 That at least is the view of the German parliament, where a vote Friday saw lawmakers denounce – in a non-binding vote – the boycott, divestment and sanctions movement, because “the ‘don’t buy’ stickers of the BDS movement on Israeli products [could be associated] with the Nazi call ‘don’t buy from Jews.’”

Now, of course, one might suggest that if anyone knows anything about anti-Semitism, well then the German parliament is where you might find them.

But that would be a rather crude World War II/Nazi reference which, when invoked, means you’ve already lost the argument. So we’ll steer clear.

You don’t support whale hunting? You must hate the Japanese. Or the Norwegians.

You want to stop buying oil? You may say it’s for the environment, but actually, you’re just Islamophobic.

Luckily, UK foreign secretary Jeremy Hunt weighed in (on Twitter, because everyone’s an idiot and that’s what we get from our politicians these days, tweets) in praise of Germany’s parliamentarians.

Hunt clarified the German argument with a succinct and clearly stated position that boycotting “the world’s only Jewish state” is anti-Semitic.

What he did there is offer a supporting argument that does not hinge on some perceived connection to the Nazis (and as we’ve established, if you invoke the Nazis you lose the argument).

There might be a more charitable account of that argument, though I’m not sure what it could be.

And since the foreign secretary of the United Kingdom, a really, really important country in the world, which is known for its independent positions on foreign policy especially when it comes to the Middle East – see here and, (Hunt again) here – and which had absolutely no responsibility for the creation of the Palestinian disaster whatsoever apart from creating it, it probably deserves some scrutiny.

It doesn’t stand up.

First of all, if you call Israel a Jewish state you not only ignore the 20 percent of its population that is non-Jewish, but you implicitly endorse things like Israel’s nation-state law that grants Jews more rights than non-Jews while undermining the claim of Palestinians to the land from which most of them were uprooted and expelled in 1948.

That makes you ignorant at best and a racist at worst.

Second, the argument seems to confuse “Israel” with “Jews.” In order to see a boycott of Israel as a boycott of Jews, you are either suggesting all Jews are in Israel, or you are suggesting those that aren’t, aren’t real Jews.

That part of Hunt’s argument is simply incoherent.

Perhaps more galling for Hunt, his argument could be construed as anti-Semitic. If he does not consider all boycotts as somehow racist (he might, but why would he?) but just a boycott of Israel and because it is “the world’s only Jewish state,” he is treating Jews differently than he would others. That surely is anti-Semitic.

If boycotts are a legitimate tool of political pressure, then calling for a boycott of Israel is simply an attempt at applying political pressure on Israel. You can agree or disagree, say it is counterproductive, even argue that it is immoral generally to boycott a whole country.

Those are different arguments that will take you via the anti-apartheid movement in South Africa through the Iraq sanctions debacle and so on.

But unless the call for a boycott of Israel is because of something to do with its Jewishness – as opposed to say (deep breath): because Israel occupies land conquered in war in contravention of international law; prevents refugees from returning to their homes and destroys their villages; demolishes homes as collective punishment; builds illegal settlements in occupied territory; shoots, kills and maims unarmed men, women and children protesting a siege it has imposed that is keeping two million people encaged and on the brink of total humanitarian disaster; or does not grant equal rights to all its citizens let alone all the people under its direct, military control, etc. and so on – it is not anti-Semitic.

To suggest so, in fact, is superficial politicking and only shields Israel from exactly the kind of pressure that might actually make a difference.

Presumably, Hunt opposes Palestinians taking up arms to resist Israel’s many violations of international law, even though as an occupied people, Palestinians are within their internationally sanctioned right to do so.

What then? Engage in a years-long negotiations process that has international law as its framework and is underwritten by the international community?

Whatever did happen to that Oslo thing?

Twenty-five years on, we now have more settlements, more settlers and, in fact, more profit for Israel.

Israel sells goods made in occupied territory – from agricultural products to Dead Sea mud to whatever is produced in the industries and by the companies operating in settlements.

Israel benefits from cheap labour in occupied territory and its unregulated health and safety environment in settlement industrial zones.

Israel sells to a captive market of three million in the West Bank while charging Palestinians fees to collect import duties on any products they import from elsewhere because Israel controls the borders.

The occupation is a cushy number. It even allows Israel’s weapons industry to market its products as tried and tested.

Take boycotts and sanctions off the table, as Hunt proposes, what leverage are you left with?

After all, the occupation hardly figured in recent Israeli elections, at least not until the man who won promised to annex more occupied land.

What can Britain do to achieve the two-state solution that Hunt seems to think there is “urgent need” for absent some kind of sanctions or threat of boycott?

If the UK wants to wield influence on world events post-Brexit, it would not be giving away what little leverage it has from the outset.

But the UK is no longer a country that takes itself seriously. It has abdicated responsibility for its foreign policy to Washington.

And it is left with facile arguments from facile politicians.

Omar Karmi is an associate editor for The Electronic Intifada and former Jerusalem and Washington, DC, correspondent for The National newspaper