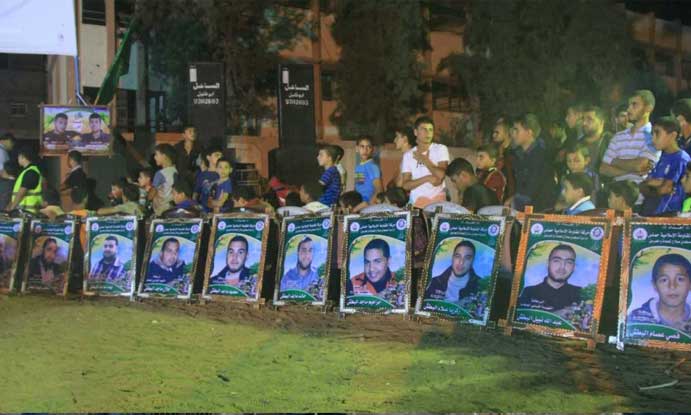 Four children killed along with 18 other family members in one Israeli air raid. For one Palestinian couple living in Gaza, the 2014 attack never goes away.

When it was announced, Palestinians in the besieged Gaza Strip expressed “little hope” of holding Israel accountable for the massacres and achieving justice.

The UN court’s investigation will probe allegations of war crimes and crimes against humanity committed in the wake of the 2014 attack on Gaza.

More than 2,250 Palestinians, including nearly 1,500 civilians, were killed and a further 11,000 were wounded in the July-August 2014 conflict, according to Palestinian and UN estimates. At least 18,000 Palestinian homes were destroyed and 73 medical facilities severely damaged.

Most of the destruction resulted from more than 6,000 Israeli air raids on heavily populated areas. On the Israeli side, 66 soldiers and six civilians died.

The decision to investigate by the ICC, based in The Hague, was widely praised by the Palestinian Authority and others as it could lead to charges against individuals who committed war crimes.

The ICC, however, began its summer recess of three weeks on July 17 without issuing a decision. It is expected the UN court will rule soon upon its return.

Even after six years, Rajaa Albatsh is still stuck in the memories of the 2014 Israeli attack on Gaza, when four of her children were among 18 members of her family killed in an Israeli attack.

The 44-year-old mother recounted the story of that “bloody day”.

“On the evening of July 12 in 2014, we were sitting normally. Men were praying Ramadan evening prayer Al Tarawih when a huge explosion hit the whole area,” she told Al Jazeera.

“Destruction was everywhere. I did not see anything. I rushed to the street. All the people around me were screaming. It was an unforgettable scene.”

Israeli air raids hit the area repeatedly, killing 18 members of the Albatsh family with 45 others wounded. The family lived in adjacent homes in the al-Tofah neighbourhood east of the Gaza Strip.

“The bombs directly hit the home of my husband’s brother. Four of my children were there and they were killed along with the whole family of their uncle,” she recounted.

Rajaa learned about the deaths of her children while on the street as people started to bring out the bodies and the wounded.

“I was out of words. My husband was evacuated to the hospital in a critical condition. It was like a nightmare.”

Alaa Albatsh, Rajaa’s husband, said all he remembers is the sound of a huge explosion then he lost his consciousness and entered a coma that lasted for a week in hospital after he sustained shrapnel wounds to the head.

“When I woke up from the coma, my relatives were visiting me. But I was wondering: ‘Where are my children? Why are they not visiting me?’ Until one day a relative decided to tell me what happened. Four of my children were killed,” Albatsh said. “It hit me like a thunderbolt.”

Commenting on the ICC’s decision to probe the attack on the Gaza Strip and West Bank, Alaa said he is not optimistic of any investigation into the killing of his family.

“Six years have passed on the last Israeli war on Gaza and nothing has changed. Israeli occupation continues the killing of Palestinians in Gaza with no deterrence,” he said.

“The Israeli occupation is backed by the United States, and there is no serious international pressure that could stop Israeli crimes against Palestinians.”

Rajaa, however, said an international trial could help alleviate her suffering.

“The ICC’s investigation won’t bring back my murdered children, but it would achieve justice and punish Israel for its brutal crimes. This may heal part of our wounds,” she said, sobbing.

‘Lost in glimpse of an eye’

After moving to Turkey two years ago, Yousef Alhallaq has never forgotten his ordeal when he lost his family in an Israeli bombing of his apartment in 2014.

“We were living in the Shujayea neighbourhood. On July 20, 2014, the bloodiest day, we fled our home under the strong Israeli shelling on the neighbourhood, along with thousands of people, into the centre of the city,” the 28-year-old recounted. “It was a mass displacement.”

The densely populated neighbourhood of Shujayea was among the hardest hit when Israeli shelling killed 72 people and wounded more than 200 others. International rights groups have called the attack “a massacre”.

“We fled to my married sister’s apartment central of the Gaza City. The bomb hit directly,” Alhallaq said.

Seven members of Alhallaq’s family were killed in the explosion: his 64-year old mother, his sister and her two-year-old child and husband, his older brother’s nine-month pregnant wife, along with her two children, Kenan five years old and Saji three years old.

Alhallaq’s father and his two brothers were wounded in the explosion.

“All I could remember is the scene of my mother, her body was bleeding under a cement column and my five-year-old nephew’s legs were seen from under the rubble. That moment, I realised that all of them were killed. I lost seven members of my family in a glimpse of an eye,” Alhallaq told Al Jazeera.

After four years, Alhallaq won a scholarship in Turkey and he left Gaza.

“Life keeps going but my injury is still open. I missed my mother’s smile in my graduation party and in my happiness when I won the scholarship. Every happiness or achievement is incomplete. It’s like to continue your life as if you’re blind,” he said.

As for the ICC investigation, Alhallaq said Israel should be held accountable.

“Israel killed seven of my family, three children among them, my elderly mother and my brother’s wife who was nine months pregnant. What is the justification of killing civilians?

“I ask the ICC to conduct a fair investigation on Israeli crimes committed in 2014 and after and to try Israeli officials who killed kids and women. There are whole families that were wiped out.”

According to the United Nations, 142 Palestinian families in Gaza had three or more members killed in single attacks during the Israeli offensive in 2014, with 742 fatalities.

‘They went to play’

Mohammad Bakr goes every day to the beach where his 10-year-old son, Ismail, was killed along with three cousins on July 16, 2014.

“It began when my son went to play football on the beach, close to our homes, along with three of my nephews,” the 59-year-old fisherman told Al Jazeera. “Suddenly we heard sounds of huge explosions and were informed that our sons were targeted on the beach.”

Ismail, 10, Zakaria, 10, Ahed, 9, and Mohammed, 11, were killed on the beach by Israeli navy vessels that fired three missiles at them.

“My brothers and I rushed to the hospitals. When I saw my child along with my nephews in the morgue, I was about to lose my mind,” said Bakr, his voice breaking.

As for the ICC’s investigation, Bakr and his family said Israel should be punished for its “crimes” under international law.

“They were just kids. They went to play because we do not have playing areas in our homes. It was a complete massacre committed in the daylight.”

Palestinians mourn boy (7) who died from ‘fear’ of Israeli forces

US calls on Israel to investigate death of Palestinian boy

Gaza’s survivors carry on in the aftermath of war

Israel green lights use of drones to assassinate Palestinians in West...

The return of the two-state solution illusion

Holiday in illegal Jewish settlements, but not Russia, says Booking.com

US says West Bank-Jordan crossing to open 24/7, but Israeli restrictions...

Liz Truss moving UK embassy to Jerusalem would be disastrous

‘We battled the algorithm and won’

Palestinians push back against Israeli government discrimination in education